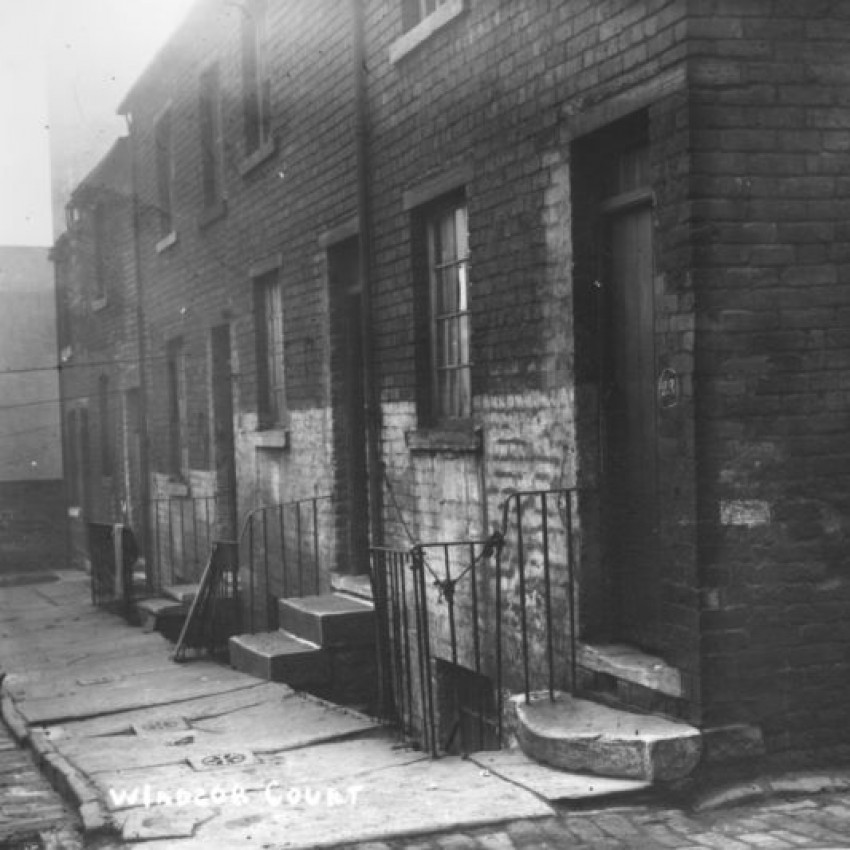 This is a poem by Sam Laycock, who's usually thought of as a Lancashire poet, but was in fact born and brought up in Marsden Huddersfield, and it's called "Bowton's Yard"
At number one, i' Bowton's yard, mi gronny keeps a skoo,
But hasn't mony scholars yeat, hoo's only one or two;
They sen th' owd woman's rather cross,- well, well, it may be so;
Aw know hoo box'd me rarely once, an' pood mi ears an' o.
At number two lives widow Burns-hoo weshes clooas for folk
Their Billy, that's her son, gets jobs at wheelin' coke;
They sen hoo coarts wi' Sam-o'-Neds, at lives at number three;
It may be so, aw conno tell, it matters nowt to me.
At number three, reet facin' th' pump, Ned Grimshaw keeps a shop;
He's Eccles-cakes, an' gingerbread, an' treacle beer, an' pop;
He sells oat-akes an' o, does Ned, he has boath soft an' hard,
An' everybody buys off him 'at lives i' Bowton's yard.
At number four Jack Blunderick lives; he goes to th'mill an' wayves;
An' then, at th' week-end, when he's time, he pows a bit an' shaves;
He's badly off, is Jack, poor lad; he's rayther lawm, they sen,
An' his childer keep him deawn a bit-aw think they'n nine or ten.
At number five aw live mysel', wi' owd Susannah Grimes,
But dunno loike so very weel-hoo turns me eawt sometimes;
An' wen awm in there's ne'er no leet, aw have to ceawer i'th'dark;
Aw conno pay mi lodgin' brass, becose awm eawt o' wark.
At number seven there's nob'dy lives, they left it yesterday,
Th' bum-baylis coom an' mark'd their things, and took 'em o away;
They took 'em in a donkey-cart-aw know nowt wheer they went-
Aw recon they'n bin ta'en and sowd becose they owed some rent.
An' neaw awve done aw'll say good-bye, an' leave yo' for awhile;
Aw know aw have n't towd mi tale i' sich a first-rate style;
But iv yo're pleased awm satisfied, an' ax for no reward
For tellin' who mi nayburs are at live i' Bowton's yard.
© Poem appears in "Warblin's fro' an old songster" by Samuel Laycock. Heywood 1893.
Share
Twitter Facebook Email Close
Close