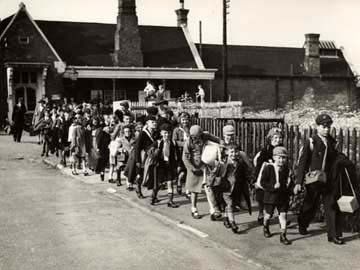 World War Two Evacuees arriving at Bingham Station, Nottinghamshire. Children were evacuated from large cities in the region such as nearby Nottingham, which were likely to be the targets of enemy bombing raids. They were received in rural towns and villages all around the East Midlands, such as Bingham.