The history of the Club from its foundation to its centenary year
View resources Teachers notes Share
Add to board
Previous section
Leeds United: an Inclusive Club

The Experience of Being a Leeds Supporter

Being a fan of any sporting team is often an emotional experience, following the rising and falling fortunes of the club over time. Leeds United games regularly draw thousands of fans to games at Elland Road. On 15 March 1967 in the 5th round replay of the FA Cup, Leeds United faced Sunderland. 57,892 fans turned out to watch the match, a record that still stands today. 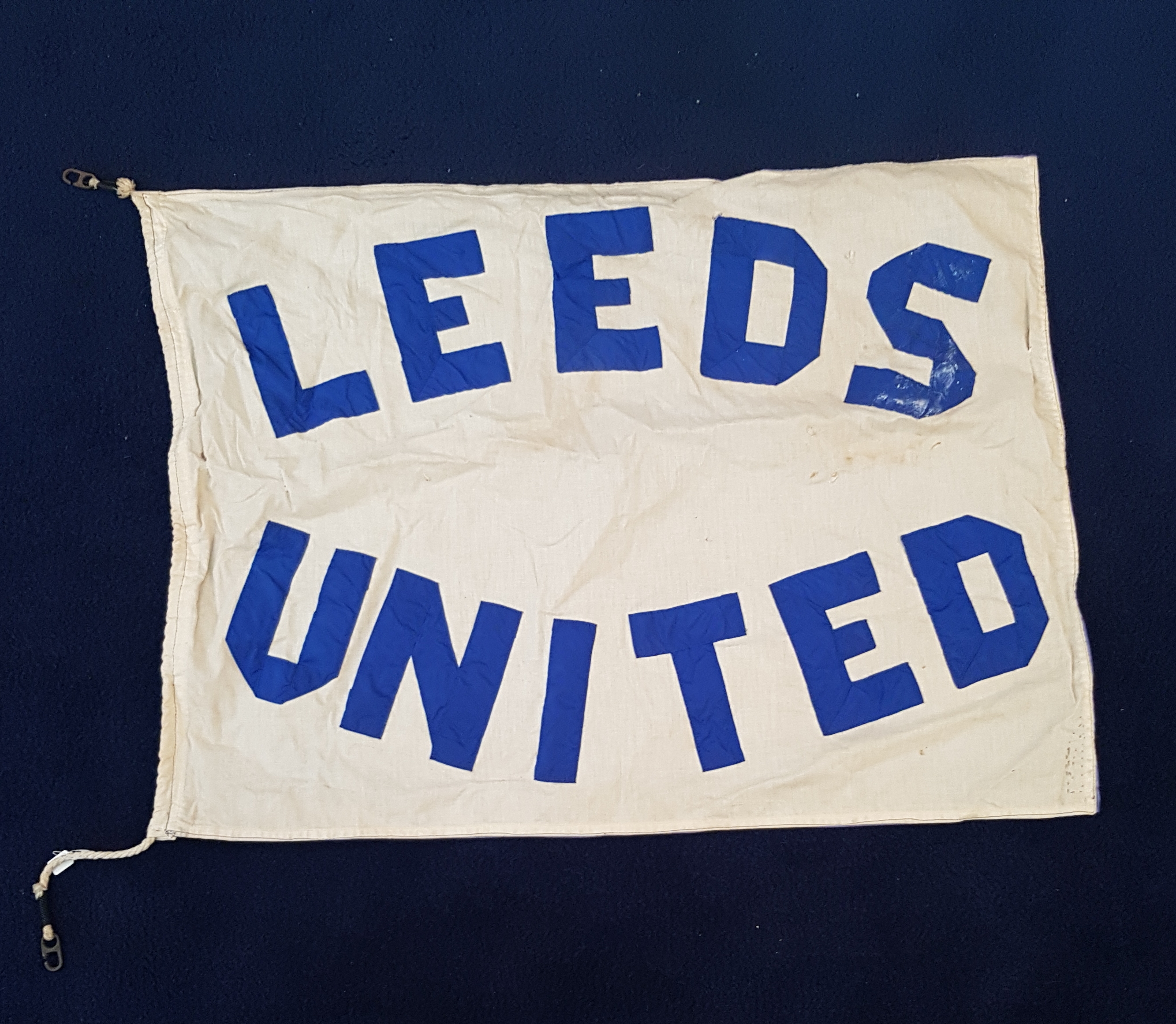 In October 2018, Leeds United fan Edna Newton sadly died aged 94. Edna may well have held the record for the longest consecutive season ticket holder - she’d bought one for the last 64 years! Edna started going to Leeds United games in the late 1930s with family members, and her first season ticket cost her just £4.00. She went to every home game, and would always sit in the West Stand. 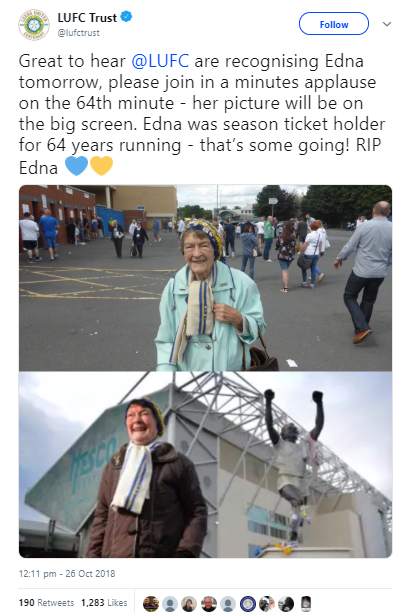 Edna was an active member of her local community, and after retirement, she had volunteered at the local Beeston Primary School, taking her love of football with her. One day, she was found by a member of staff out in the playground having a kick-about with the children, despite being in her 80s at the time!

When her death reached fans through social media, many Twitter users shared fond memories of Edna, with some of them having sat next to her at games for several years. Appreciation for Edna’s devotion to Leeds and football crossed team boundaries, with many messages of remembrance and condolence coming from fans of other teams.

'I know our fans don't see eye to eye at the best of times, but at times like this, rivalries become insignificant. R.I.P Edna, from a Manchester United season ticket holder.' @little_inch 26 October 2018

On the first home match following her death, at the 64th minute mark, Leeds United held a minute’s applause to pay tribute to Edna, and her unwavering support for the club.

"My mam was a season-ticket holding 'superfan' herself and might have rivalled Edna if she'd lived a bit longer... I spent many a happy matchday at Elland Road with either my mam (in the stand) or my sister (on the terraces) in the 1970s 'Super Leeds' era, where you had to go in through the 'Boys Entrance' (which mortified me) but it was only about 7 shillings and 6 pence."

For many fans, their support of the club was passed down from an older family member, providing a great bond between generations.

Increased media coverage means that those fans who cannot attend the games in person can follow along with the action, whether on the radio, TV or over the internet. Social media also enables fans to connect with each other, swap opinions and debate match-play. Many texts and tweets between fans end with the hashtag ‘MOT’ in homage to the team anthem, Marching On Together.

Like many football teams, Leeds United has its own anthem. Unlike many other teams however, the Leeds anthem, ‘Leeds, Leeds, Leeds’ (more usually called ‘Marching On Together’) was composed specially for the club by Les Reed and Barry Mason. The song was originally released to coincide with the club reaching the 1972 FA Cup Final and was sung by the players themselves, with help from some supporters. It was a huge success, reaching number 10 and staying in the singles chart for nearly three months. 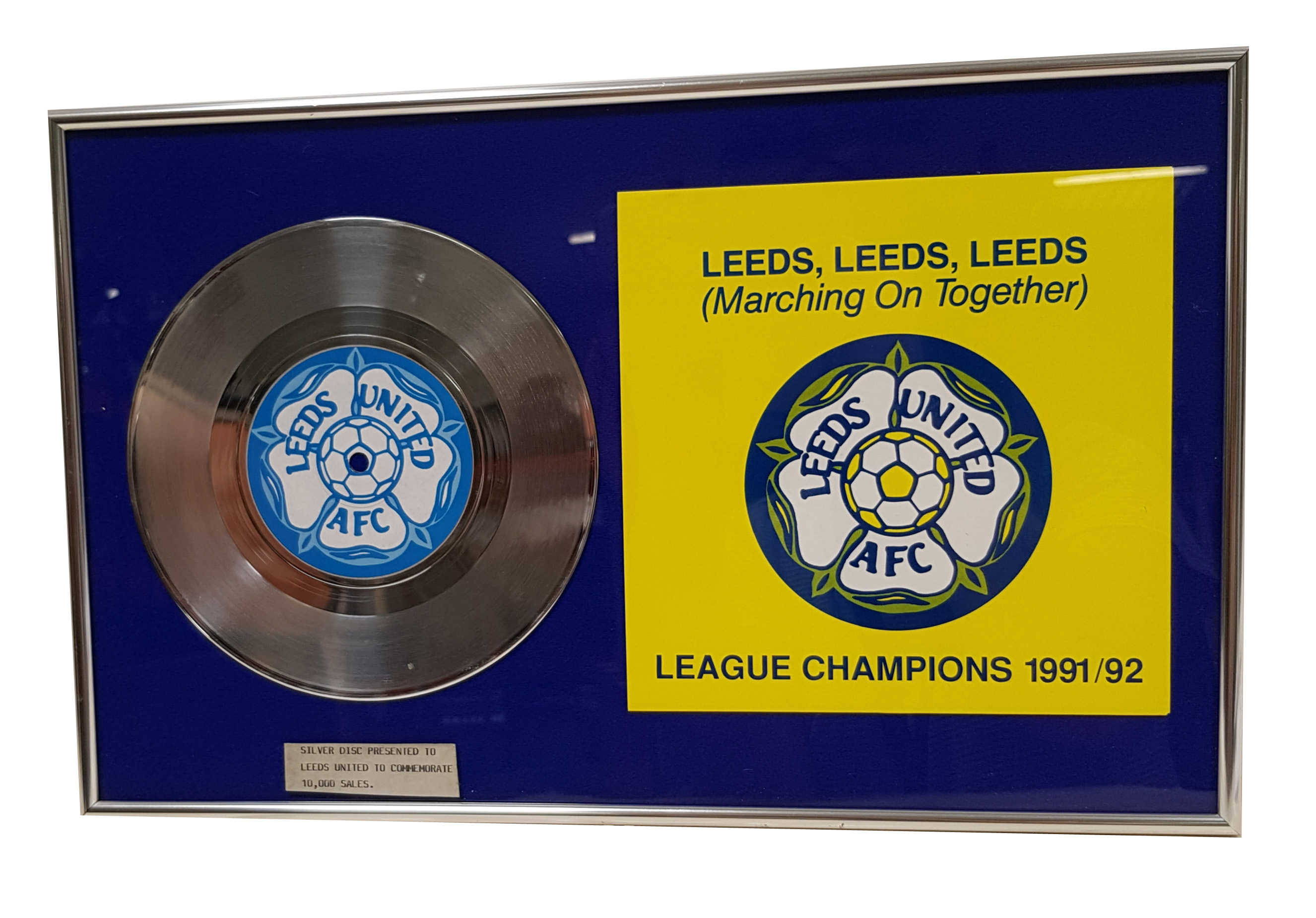 'Marching On Together' is played just before kick-off and the start of the second half at every home game at Elland Road. Most Leeds fans in the stadium will stand and sing the song together, creating a sense of solidarity and (hopefully) intimidating the opposing team with their show of support.

"There's a number of reasons why I support Leeds, but my dad is a huge Leeds United fan so that definitely played a big part.

One thing that hasn't changed since I was a kid is the amazing match day atmosphere, there's a real buzz around the stadium (win or lose) and there's no better feeling than hearing 30,000+ fans singing Marching On together."

Since the early days of Leeds United, fans have been able to show their support for the club through buying souvenirs. These included handbooks and yearbooks. 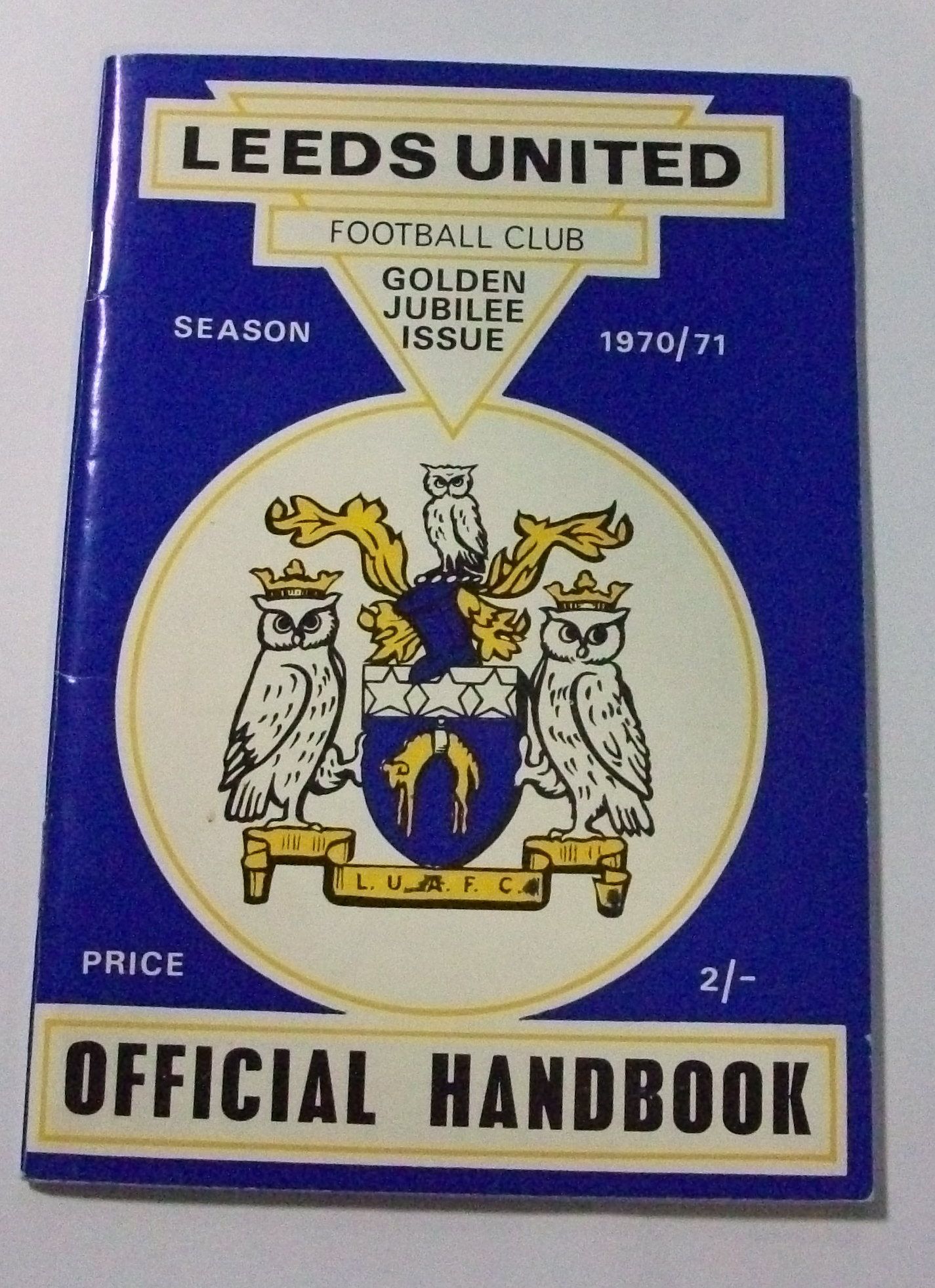 As the club developed, other items such as pennants and calendars were sold. The Sports and Souvenir Shop opened at Elland Road in 1972, selling scarves, badges, rosettes, mugs, tea towels and much more. 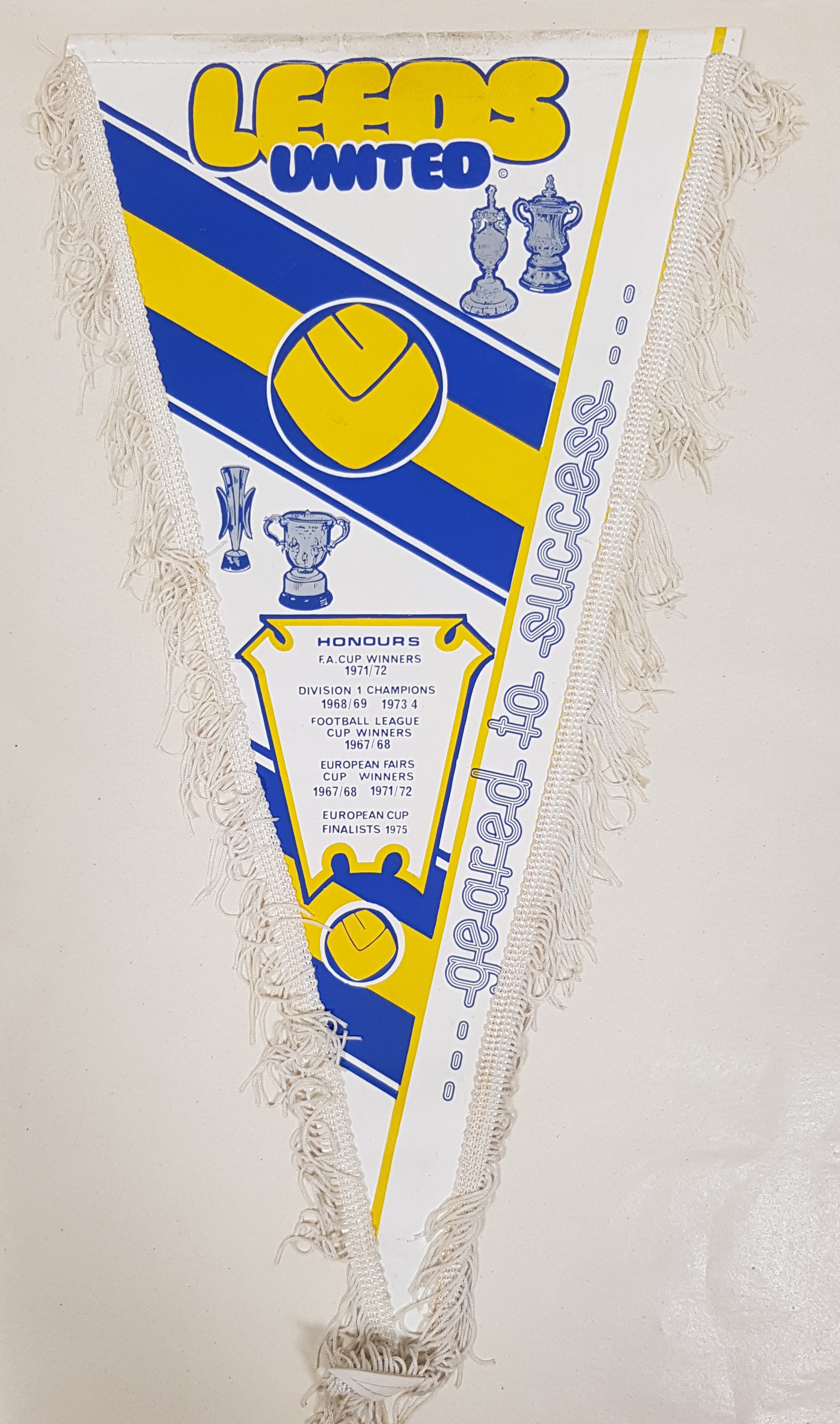 In 1996 the club megastore opened, and with it the number of different souvenirs available rocketed. Many Leeds United fans of all ages will have a memorabilia collection and, just like a club supporter, collections are often passed down to younger family members.

Early programmes were very simple, often just a single sheet listing the date, team names and players. These developed into 4 or 8 paged programmes printed in black and white. Now match programmes are normally printed in full colour on glossy paper.

Collecting programmes became a common hobby among fans during the 1960s, and now old programmes can fetch good prices at collectors’ fairs or online.

Coullin Miekle, a Leeds United fan and former contributor to the Leeds United Against Facism and Racism fanzine spoke about the amount of books and stories (both fiction and non-fiction) that the team has inspired:

“Leeds United Football Club has fired and fuelled the imagination of countless authors and ordinary people alike, with websites,  forums and fanzines created and well over 350 books produced, covering many aspects of the club.  There have been biographies, autobiographies, photo-collections, anthologies, statistics compilations, poetry and song portfolios and even novels written about the club.  Notable factual books include Daniel Chapman's '100 Years of Leeds United', Anthony Clavane's 'The Promised Land' and Rob Bagchi's 'The Unforgiven', together with personal stories from well-known Leeds fans such as Gary Edwards ('Paint It White') and Heidi Haigh ('Follow Me and Leeds United') amongst others. The best-known fictions or 'fictionalisations' include 'Dirty Leeds', 'Disrepute' and 'The Gigante' by supporter Robert Endeacott and the perhaps infamous 'The Damned United' by David Peace which was adapted for the stage and, in less impressive manner, ( according to the clubs fan base ) for cinema too."

In 2019 Amazon Exclusive launched 'Take Us Home' a documentary about Leeds United battle to win promotion back to the Premier League.  The documentary is narrated by LUFC fan Russell Crowe.