Moccasins made by an Indigenous Person in America

These child’s moccasins date to the late 19th century and belonged to an Indigenous person in America. They have red material on the cuffs known as 'trade cloth'. 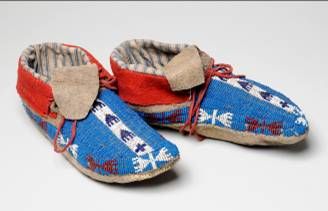 A Pair of Moccasins made by an Indigenous Person in America

Trade cloth was a machine-made textile that was easy to sew and cut. It was introduced by European traders to the Indigenous Peoples of America, who valued it as a simpler material to use than traditional animal hides. In the late 1700s trade cloth was used by the United States government as payment to Indigenous Peoples for land transactions and settlements of peace treaties.

In the 1880s and 1890s many people from Lincolnshire emigrated to America and Canada in response to groups such as the Methodists advertising for settlers. These colonial groups took land from the Indigenous Peoples.

The moccasins, together with other items of clothing, shoes, a tomahawk and a pipe, were collected by a carpenter from Worlaby in North Lincolnshire, who probably purchased them from  an Indigenous person as souvenirs. He travelled to America to seek work on the frontier settlements. Unlike many of his neighbours, he came home again, bringing with him these mementos of his time abroad.