Betsy Sawyer was a formerly enslaved Antiguan woman, who died in Yeadon in 1839. She had been emancipated by the Murray family, and came to live with and work for them as a domestic servant in Yeadon.

Rev Thomas Murray had travelled to Antigua as a Wesleyan Methodist missionary. He was an activist abolitionist, and aided several uprisings by enslaved Africans.

It is possible Rev. Thomas Murray bought Betsy with the intention of freeing her. He had good intentions, but was buying an enslaved person the right course of action? Were there other options available?

Can aiding uprisings that use violent protest be justified?

Betsy died whilst in domestic service to the Murray family. Her memorial is on the exterior of Yeadon Methodist Church: 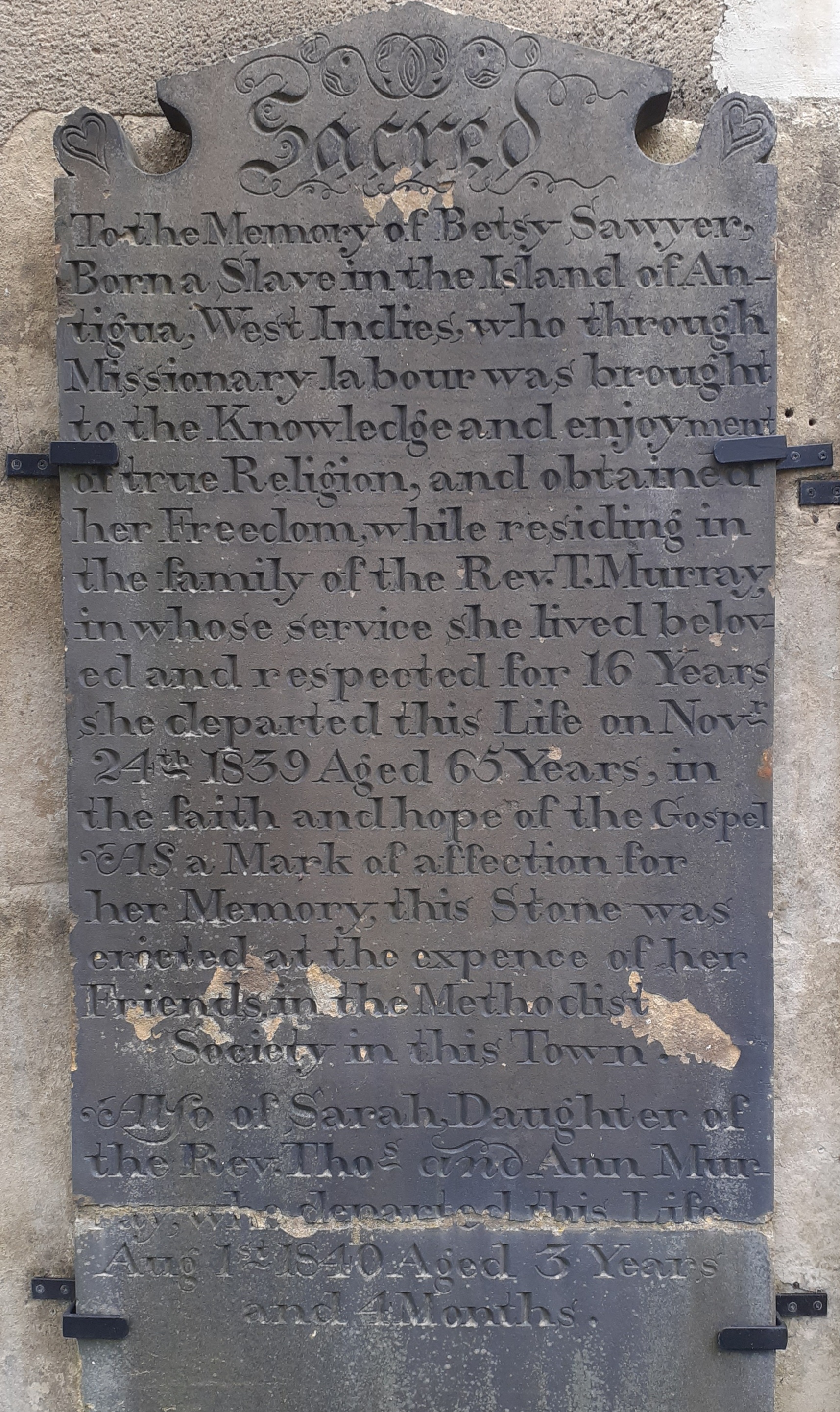 ‘To the memory of Betsy Sawyer, born in slavery in the island of Antigua, who through missionary labour was brought to the knowledge and enjoyment of true religion obtained her freedom whilst residing in the family of the Rev T Murray in whose service she lived, loved and respected for 16 years. She departed this life on 24 November 1839 aged 65 years in the faith and hope of the gospel. As a mark of affection for her this memorial stone was erected at the expense of her friends in the Methodist Society of this town.’

Her death is also recorded in The Wesleyan-Methodist Magazine (Vol 63, Pg 171):

‘Nov. 24th.—At Yeadon, Betsy Sawyer, who, for eighteen years, had been a member of the Methodist society. She was brought to a saving knowledge of the Gospel, when a slave, in the island of Grenada, West Indies, and was shortly afterwards received into the family of the Missionary there, as a domestic servant. Her Christian course was marked with great sincerity and devotedness, while her outward conduct was such as to secure the confidence and affection of the family with which she resided, and the esteem of all who knew her. Her last illness was short; but death found her ready for her change. She expressed her entire trust in the Lord Jesus, and then peacefully breathed her spirit into his hands. - T. M’

Both of these accounts are likely to have been written by Rev Thomas Murray, the latter is signed with his initials. We don’t hear from Betsy in her own words, only those of Thomas Murray.

We will never know how Betsy considered her life.