At around 8pm on 31 January 1916, the inhabitants of Loughborough were startled by a succession of loud explosions. An hour earlier, the police had warned the local authorities and tradesmen of air raids on the coast but, as German bombers had never travelled so far in-land before, no one in Loughborough had been concerned.
When the Zeppelin airships approached, the town was entirely unprepared. Street lights were blazing, the Ashby Road Picture House was lit up to lure in cinema-goers, and lamps glowed behind curtained windows across Loughborough.

The first bomb fell in a garden behind Orchard Street, followed by another in the Rushes, the next street. The location was at equal distance between the gas works and the electricity station. Broken glass showered down on the road and fell from shattered windows onto night school students’ books at the local college.
Then, the raiders passed on to the Empress Works, a local crane manufacturer, just missing the site. That night employees had been sent home after the police warned of a possible air raid. Two workers, however, disobeyed orders. Crane driver Beatrice Smith dashed back in the dark to shut down the main electrical switch, while Ernest Stubley, the plant electrician, stayed overnight to limit any bomb damage. Both were later awarded medals for their bravery. 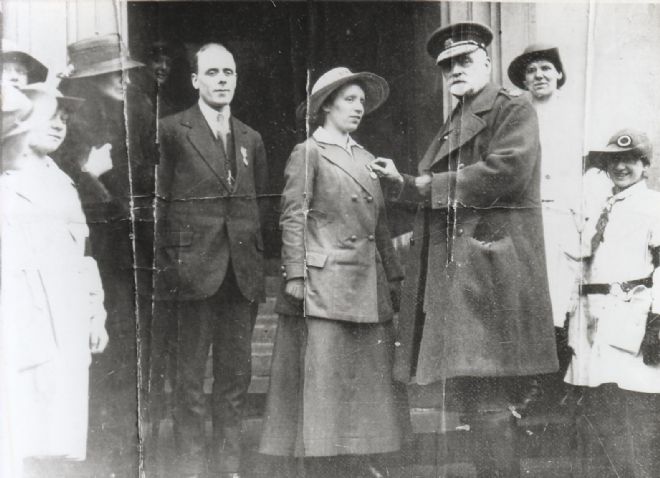 Beatrice Smith Receiving OBE
Within five minutes the airship had passed over to Burton-on-Trent, yet 10 people had been killed, including 50-year-old father of 12, Arthur Turnill and a recently married young couple, Joseph and Alice Adkin. Mary Anne Page and her two teenage children (pictured below) were killed when their home was hit. Mary Anne's husband was away serving in the army at the time. He would survive the war, now with no home or family to return to.

Aftermath of the Raid

Shocked by the tragedy, the local townspeople rallied round after the raid and a relief fund of over £500 was raised to pay for the funerals of the victims and compensate those who had been injured or had their property damaged. 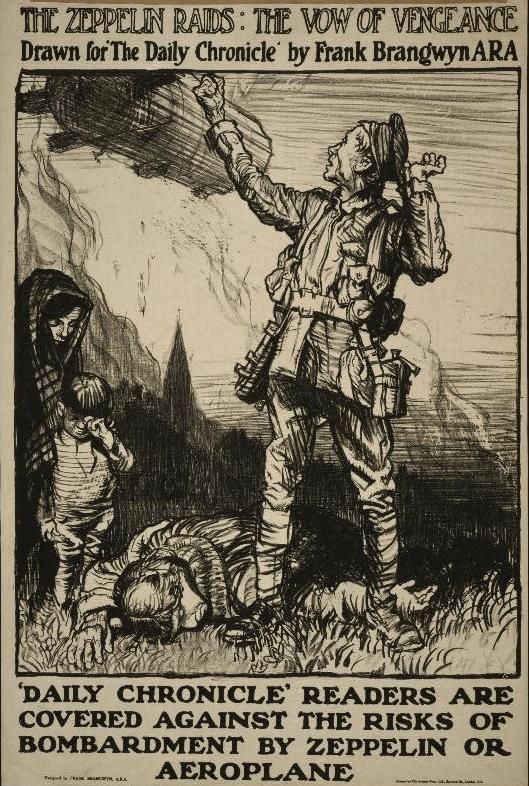 Daily Chronicle Newspaper Drawing by Frank Brangwyn
In many towns and cities across the country the civilian population was now experiencing, at first-hand, the trauma and violence of war. The air raids of 1914-1918 gave a hint of what was to come during the Blitz of the Second World War.

Compensation – money given to pay for a loss or damage
Insurance – when a company pays for loss, theft or damage, in return for a fee
Munitions – weapons manufactured in wartime
Relief fund – money given to victims of a disaster
Succession - one after another
Trauma - a severe shock
Next section