This Anglo Saxon sword pommel dates from the 7th Century AD (about 600 – 650 AD). A sword pommel is the small (in this case only 4.5cm x 1.5cm) decorative knob at the top of the handle. It was used to improve grip, to stop the sword slipping out of a warrior's hand. 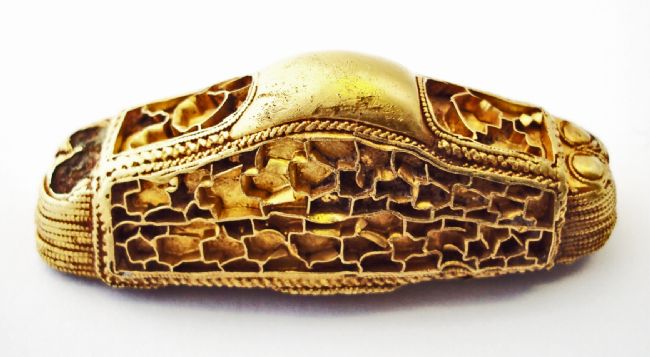 Anglo Saxon Sword Pommel
This pommel is made of leaded bronze, with a thin sheet of gold covering it. On one side of the pommel you can see an irregular design of empty gold 'cells' which would have held very small slices of precious stone. The other side has a pattern of knotwork made of fine gold wire soldered to the surface.

This highly decorative sword must have belonged to someone important, because it would have taken so long to make and uses such rare materials. It was found on the beach at Aldborough in East Yorkshire by two metal detectorists in 1997. 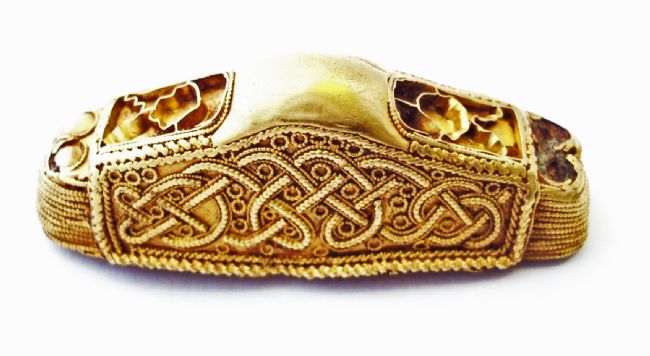 Who were the Anglo Saxons?

Anglo Saxons were tribes from mainland Europe who invaded Britain after the Romans left in 400 AD. They made beautiful jewellery, armour, drinking cups etc, using gold and gems from countries sometimes thousands of miles from their homes. They were not Christians; they had their own gods. 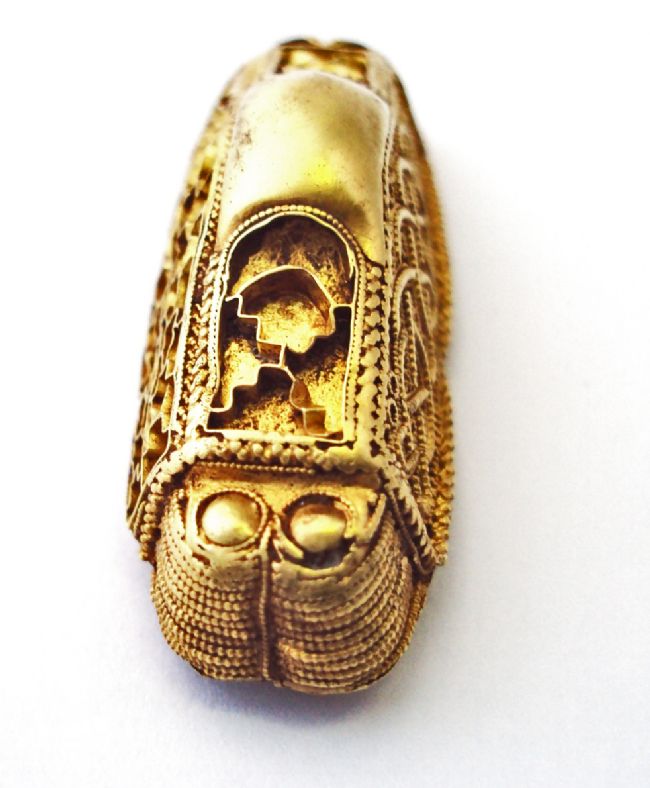 Anglo Saxon Sword Pommel
Objects that once belonged to the Anglo Saxons are still being found in Britain – often by people using metal detectors. The Staffordshire Hoard, a huge group of objects, was found in 2009 and the Sutton Hoo burial ship site and its contents was found in 1939.

Knotwork - intricate pattern with lines criss-crossing each other
Leaded bronze - bronze is a mixture (an alloy) of copper and tin. Sometimes other metals would be added to give the mix extra strength or make it easier to work. This piece had lead added
Pagan - local religion, sometimes to do with the earth or witchcraft
Soldered - metalworkers used a soft metal called solder, which was easy to melt and could glue together parts of a metal object