Annie’s parents were not wealthy people and as the National Health Service (NHS) had not yet been formed, people had to pay for medical care. Annie’s parents had not been able to afford to have her and her sister Doreen vaccinated to protect them from the deadly childhood illnesses that were prevalent at the time.

When Annie was five years old she contracted diphtheria and had to be isolated in Killingbeck Hospital in Seacroft. She was not allowed to have any visitors, even her parents were not allowed to visit her. 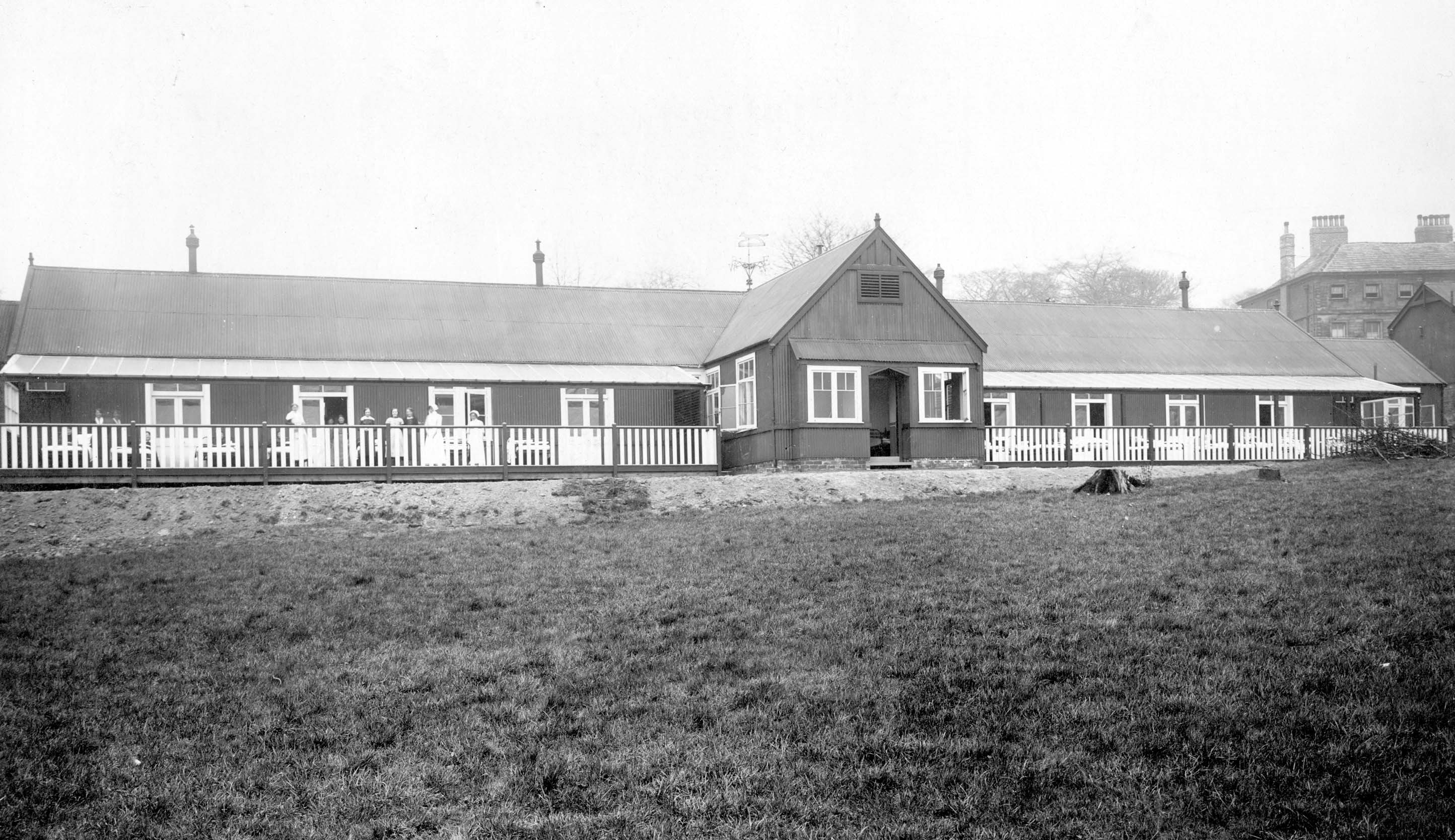 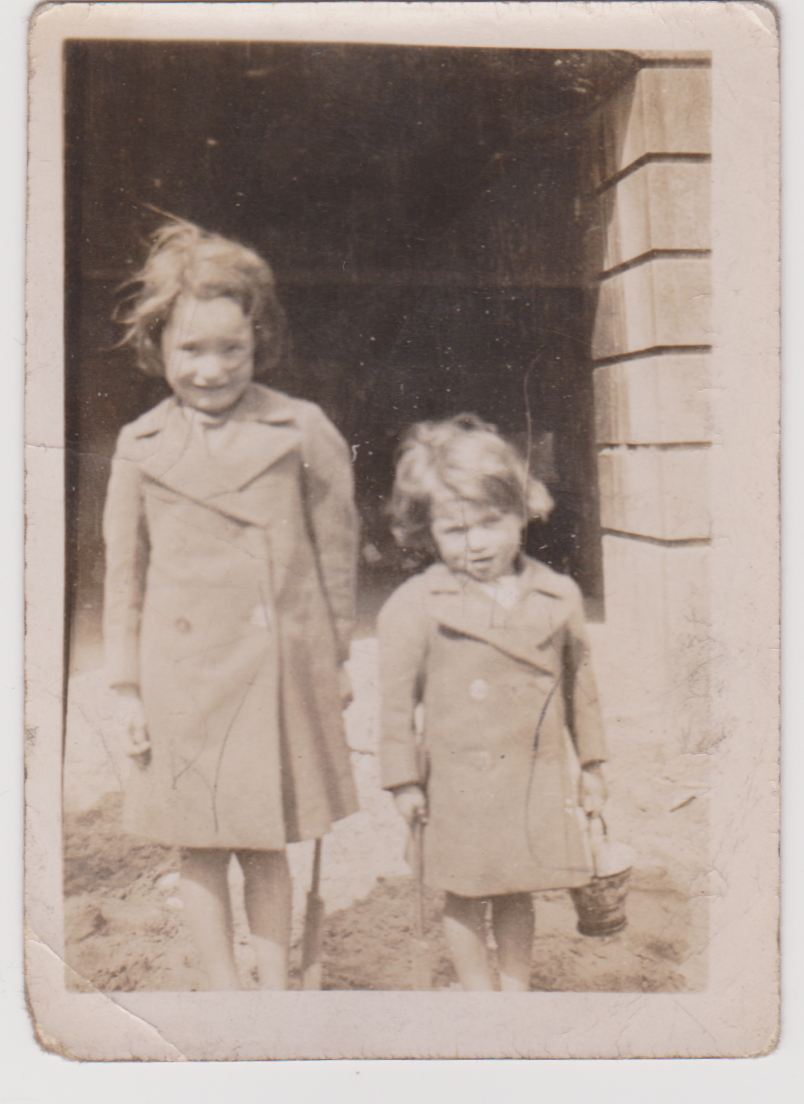 Annie Clarke and Her Sister Doreen

Annie attended Beeston School, where her father and grandmother had been pupils before her.

She started school in the infants with Miss McDermott as her first teacher. There were no carpets on the classroom floor and there was a large open coal fire in the room to help keep it warm. Every afternoon the pupils would get a hot drink of Horlicks before having a nap. 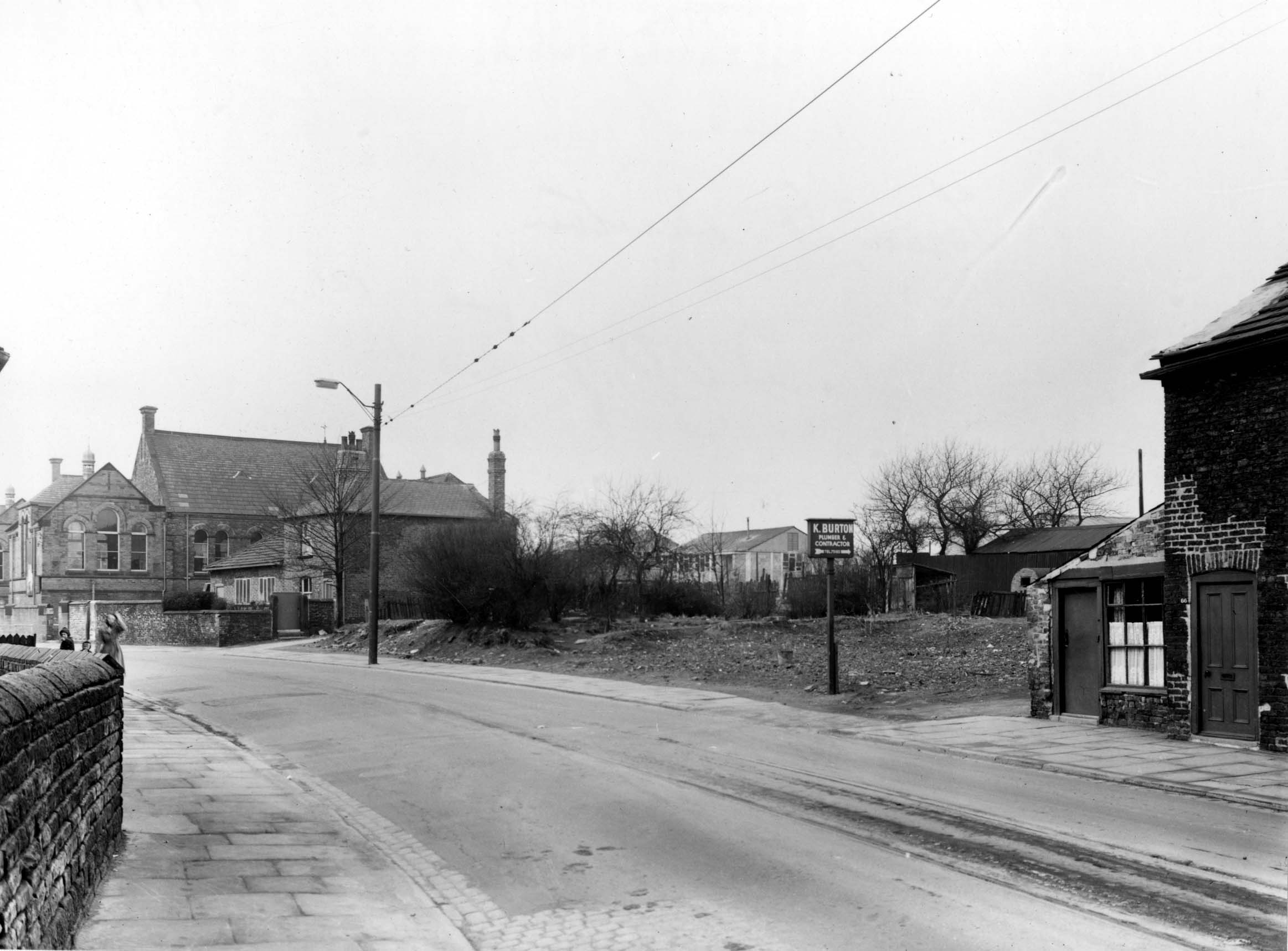 As Annie moved up the school the rules became more strict. Pupils had to sit quietly at their desks at all times with their arms folded. Sometimes they had to keep their arms folded behind their backs to encourage them to sit up straight. Pupils used a dip pen and ink to write, but during the war when paper was scarce, Annie used a slate and slate pencil.

Some of the pupils had school dinners but as Annie lived quite close to the school she would go home for lunch. At breaktimes Annie and her friends played games with balls, skipping ropes, hoops, whip and tops and hop-scotch.

Annie’s report card from the Christmas term in 1941 shows the list of subjects that she studied, and the marks awarded from end of term tests. 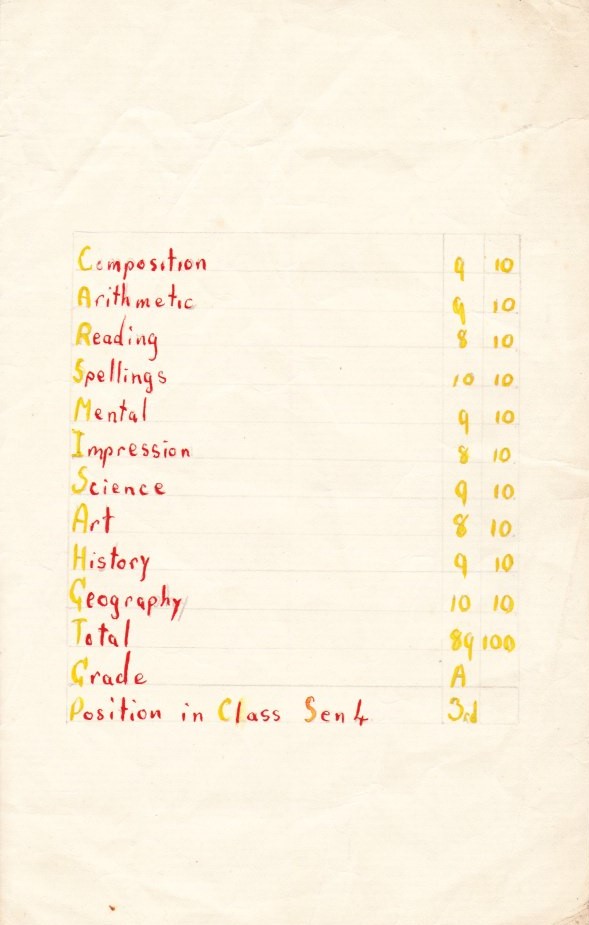 During English lessons pupils had to practise handwriting and learn poems ‘off by heart’. One of Annie’s favourite poems was ‘Leisure’ by W.E. Davies, which she copied out in her best handwriting. 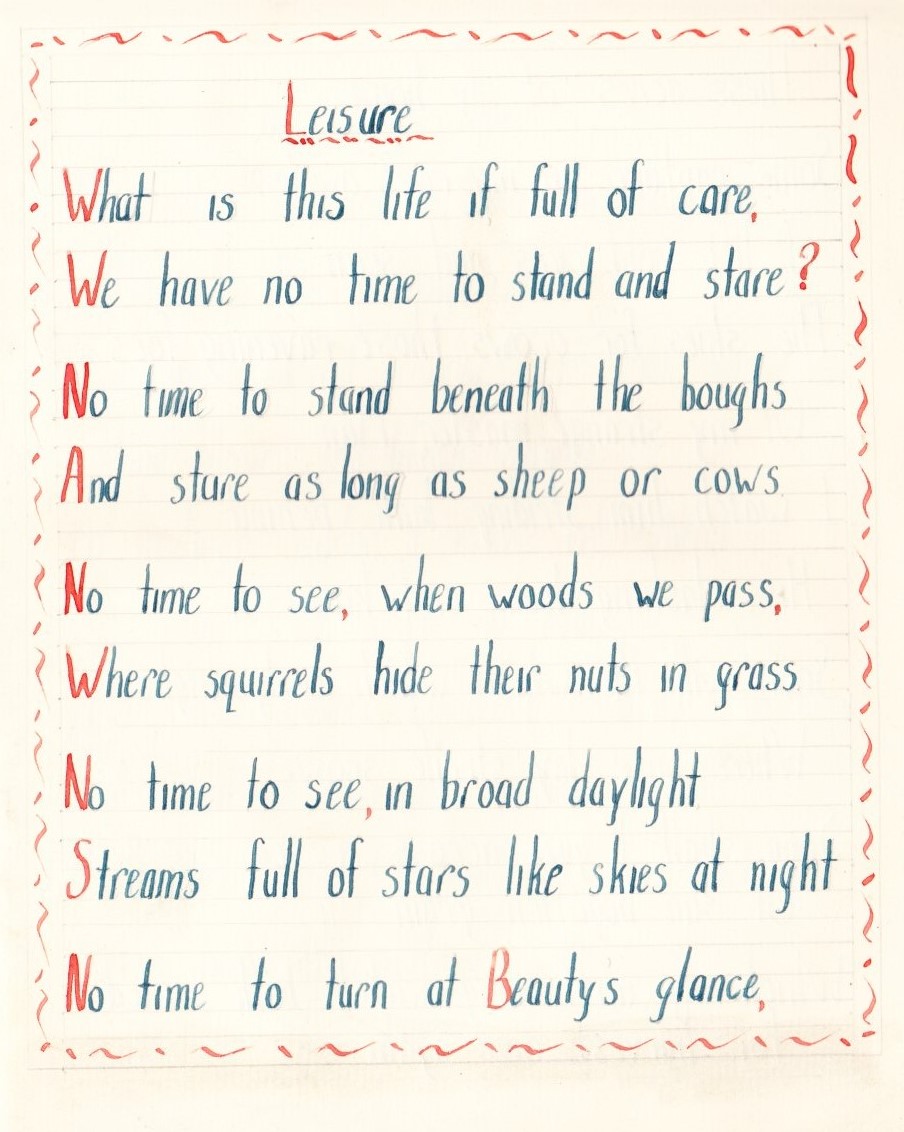 During this time period pupils were educated according to strict gender roles. Girls were taught how to be wives and homemakers, and Annie had to learn subjects such as Housecraft and Mothercraft. Housecraft involved learning how to mend clothes, do the washing (washing was all done by hand), cleaning the house properly, washing windows and generally how to keep a house in perfect running order. Mothercraft focused on looking after babies, sterilising and making up bottles of feed, how the cot should be kept, what babies should wear and how to fold nappies (disposable nappies did not exist!). Some of Annie’s notes on these subjects can be seen below. 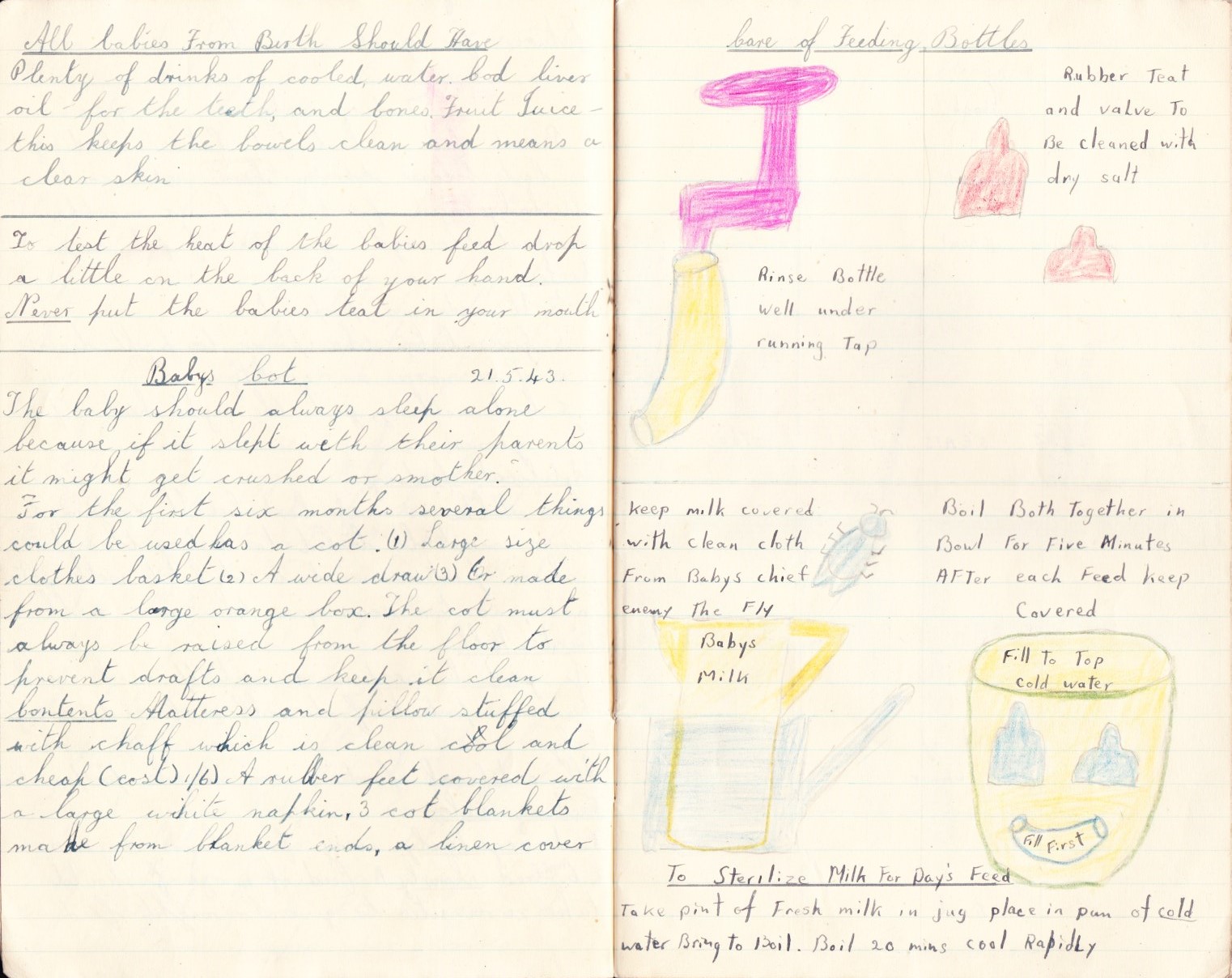 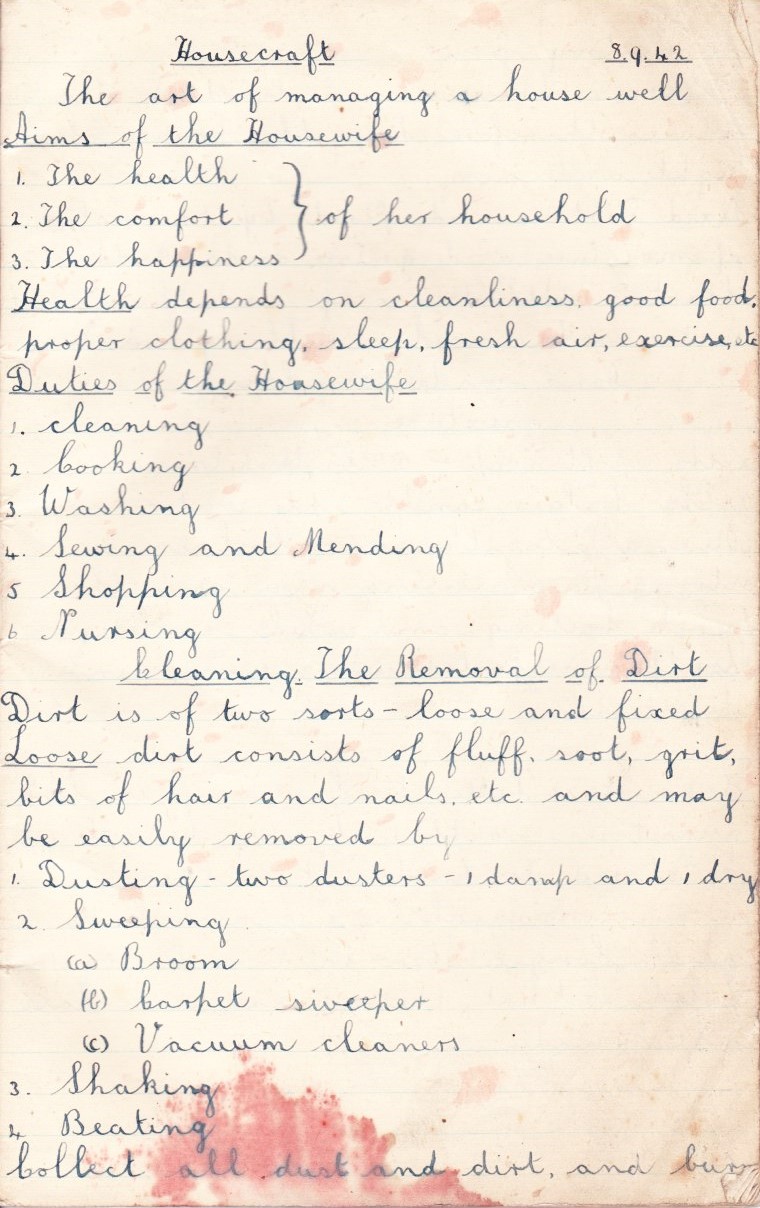 There wasn’t much room to play inside in a two-up two-down house, and so Annie and her friends would play outside in the cobbled street. It was safe to play on the road as there were very few cars in the early part of the 1900s.

Popular pastimes included playing with marbles, building things from old cardboard boxes, and making go karts called ‘bogeys’, which the children would race up and down the cobbles.

One day Annie was playing on a bogey with a boy in the street. When he went in for tea he said Annie could carry on playing on the bogey by herself. Annie was having a great time, until she veered off course and went straight into a neighbour’s cellar window, smashing it. Annie ran away to her grandma’s house, leaving the front wheel of the bogey sticking through the window! Gran came out with Annie just in time to see the neighbour marching angrily across the road. Before the neighbour could speak Gran held up her hand and said:

'It’s all right Harriet Ann. Don’t worry, it will be seen to when the men come home'. With rather a reluctant smile the neighbour said, ‘Oh I know Annie, I know. It’s all right I know you’ll see to it.’ So Annie escaped a telling off … thanks to her grandma!

Television was still in the very early stages of development, and TV sets were rare. Most families like Annie’s sat around the radio listening to programmes together or playing board games.

Like many children at the time, Annie listened to a children’s programme called ‘The Ovaltineys’ which was broadcast at 5.30pm every Sunday evening on Radio Luxemburg. Ovaltine was a popular malted milky drink for children and the radio programme was also a way of advertising the product. Annie became a member of ‘The League of Ovaltineys. Children who joined the Ovaltineys had membership cards and badges, and used secret codes and passwords. 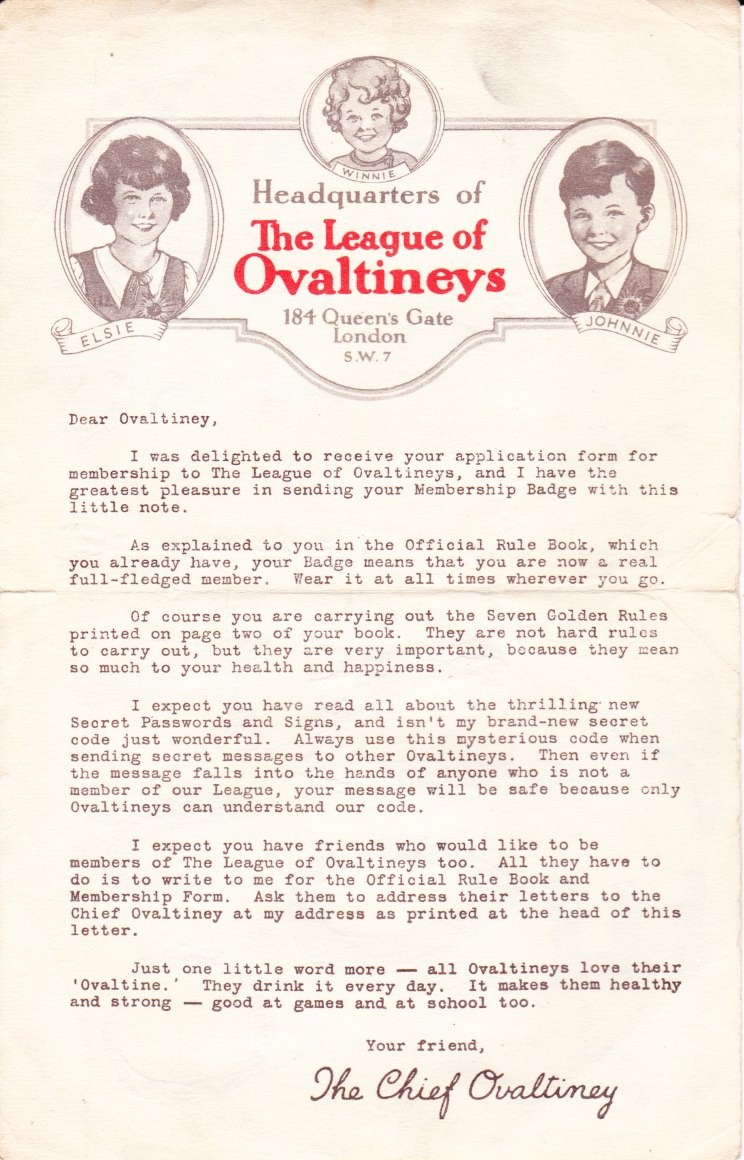 Annie would also listen to ‘Children’s Hour' and funny programmes on the radio with her mum. Annie borrowed lots of books from the library as she loved reading, especially stories about ‘Biggles’ or ‘Just William.’

Diptheria: A highly contagious and potentially fatal infection that can affect the nose and throat, and sometimes the skin. Diptheria is now very rare in the UK due to high vaccination rates.