Things became different at home too.

Brown paper was also stuck on the windows to reinforce them in case of a bombing.

The gas lights in the houses had to be dimmed.

Annie didn’t have an Air Raid shelter so if there was an Air Raid Annie and her mum had to go down into the cellar, but often they just hid under the reinforced table in the parlour. Annie’s mum would sometimes go to the end of the street and watch the battles between the German planes and the British Spitfires over the city. Often Annie would hear the ‘doodlebug’ bombs as they descended onto the city.

During the worst night of German aerial bombing on Leeds on 14 March 1941, Beeston was the most severely hit area of Leeds. Even the men’s toilets in Cross Flatts Park were bombed! There is a story that was spread around at the time that the German pilot chose to drop the bombs in the park to save lives, but we will probably never know if this is true.

On Bonfire Night there were no evening bonfires as this would have created too much light for the German bombers so the bonfires were held during the afternoon instead.

Food was scarce during the war. Boats bringing supplies from abroad were targets for bombers and submarines, so people had to make do with what could be provided at home.

At school, pupils were taught to not be wasteful with anything.

Food was rationed and everyone was issued with a ration book. There were rationed coupons for all kinds of food, including meat, flour, sugar, eggs and sweets. People used powdered egg as a substitute for fresh eggs and the flour that was available was a little bit grey, but it baked just as well. 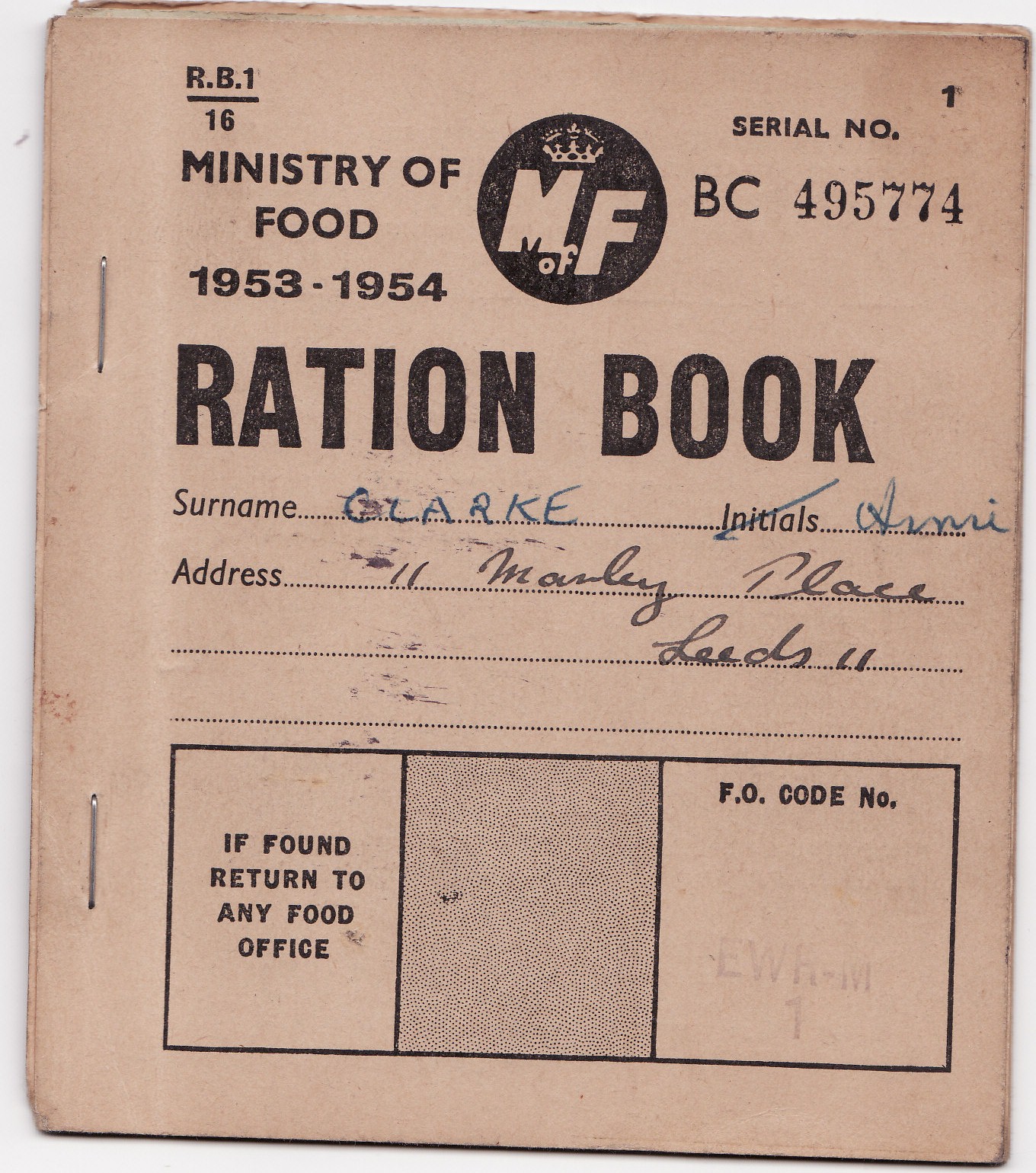 Food was not sold in packets but had to be individually weighed out and wrapped up. This took longer than usual, and people got used to queuing outside shops.

Bananas were rarely seen. Annie writes in her diary:

Many people had allotments, or turned their back garden into vegetable beds and grew their own vegetables to eat or to share with their neighbours. Growing your own vegetables was popular as it supplemented the rations.

Coal was also rationed, and clothes too. Everyone had a clothing coupon book. 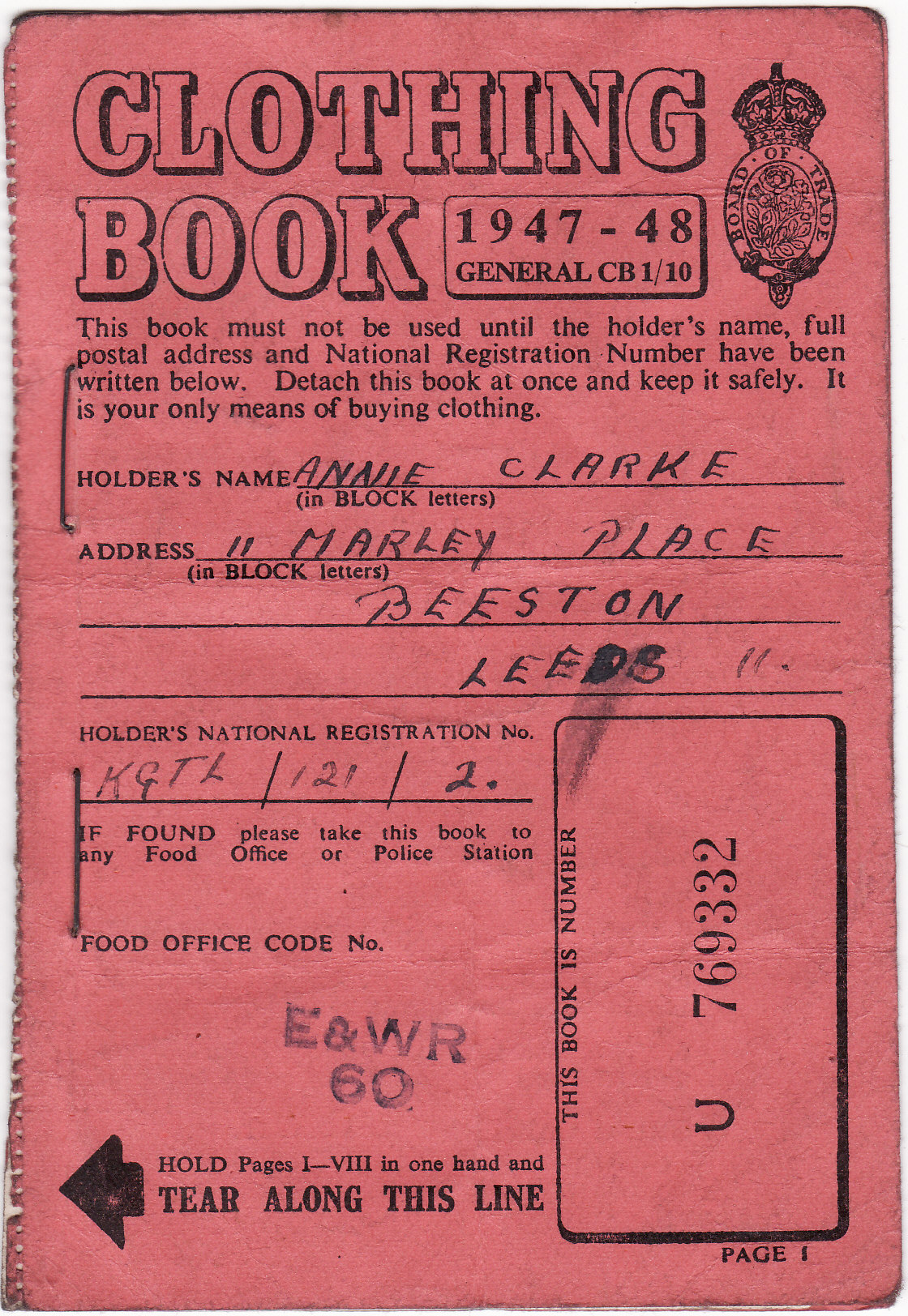 Metal was needed for the war effort to make munitions. All the railings from around the parks were removed and melted down. You can still see the evidence of this in many parks and outside some homes in England, where only the short stubs of metal railings remain poking out from the tops of low walls.

Annie made sure her house was safe during the blackout but it wasn’t just her house that needed to be dark, the streets, railways and factories all had to be dark too so that the Germans didn’t know where to bomb.

With street lights not being used, children played out in the dark during the War. Annie wrote to her friend Norman:

The trams were blacked out and Air Raid Precaution wardens patrolled the streets to ensure that people adhered to the Blackout. If even a chink of light could be seen from a house they would shout, ‘Get that light out!’

Precautions were also taken in the event of German soldiers making it on to British soil. For example, signposts were removed from the roads so that if the Germans did invade, they wouldn’t know where they were or where to go.

During the War there was lots of propaganda from the Government aimed at making and keeping people loyal to the war effort, and Annie was very proud to be British. Many people felt that, ‘Our island stood alone.’ and that Britain would be victorious.

Annie would have written this out for handwriting practice at school.

Leeds 'Wings For Victory' week was held from 26 June to 3 July 1943. This was a public appeal to raise a minimum of £5 million pounds to provide aeroplanes for the war effort. People were urged to invest money in National War Bonds, Savings Certificates and other Bonds which would be payable in the future. The people of Leeds raised enough money to pay for a Spitfire. 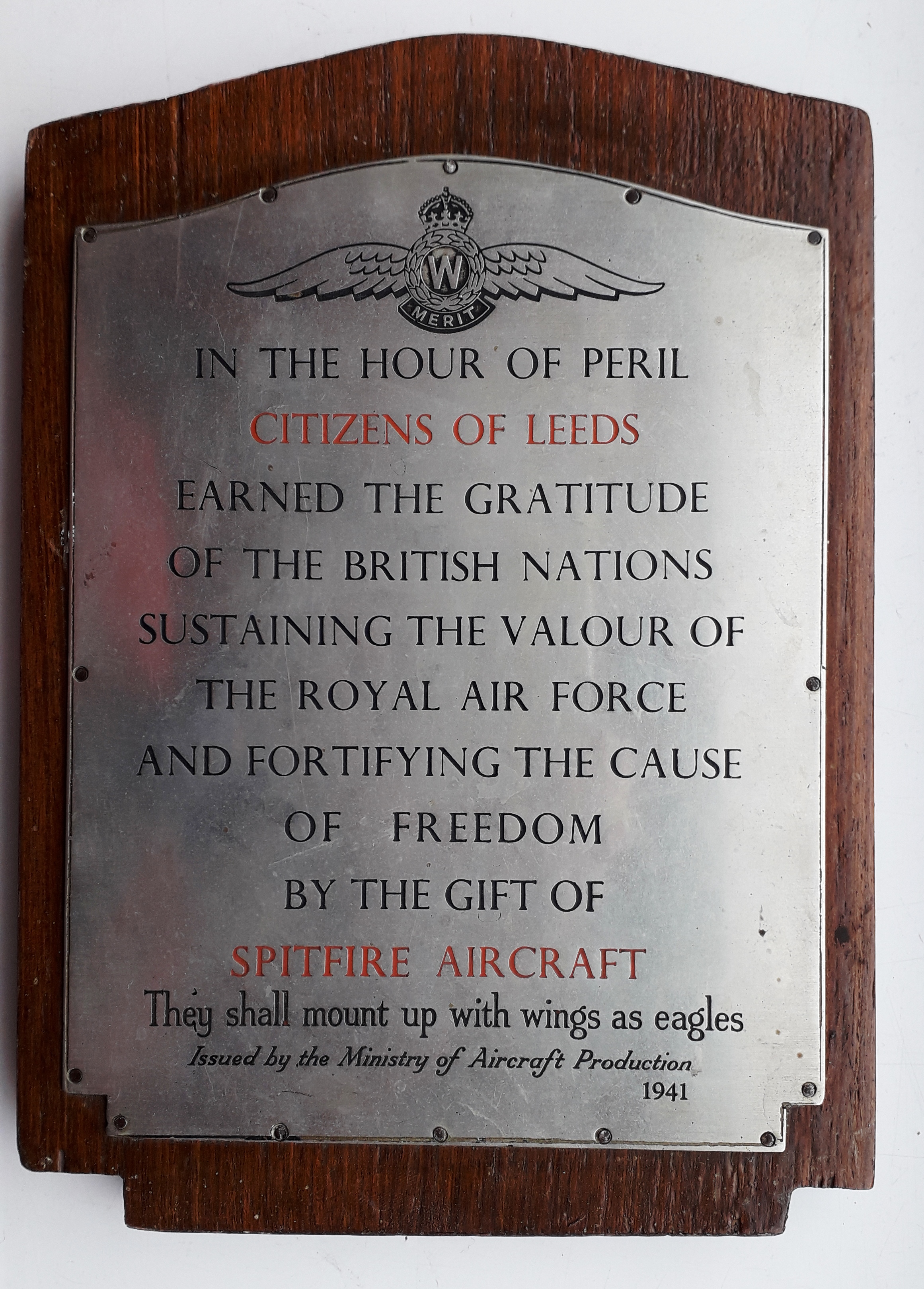 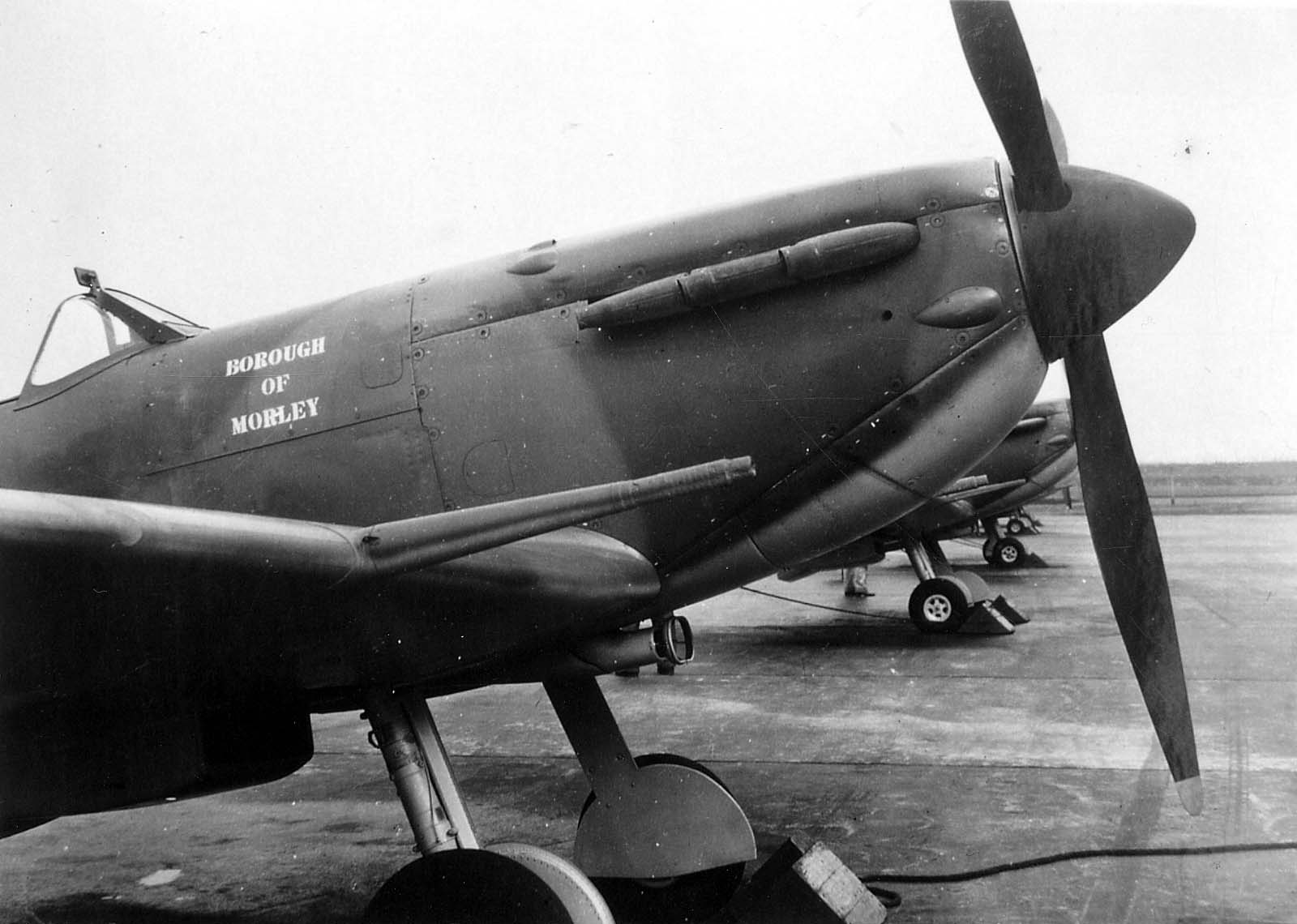 The Borough of Morley, Mark II B Spitfire 1941

Annie wrote about the ‘Wings for Victory Week’ at school.

On 14 November 1941, the aircraft carrier HMS Ark Royal was torpedoed and sunk. The people of Leeds decided to raise money for a new vessel. People held Beetle drives and raffles, amongst other activities, and managed to raise £10million (about £516 million in today’s money) in just one week, enough money to build another aircraft carrier! Warship Week became known as ‘Ark Royal’ Week.

When Annie was 13 she had a very serious accident. In those days girls had different lessons from boys in the afternoons to prepare themselves for when they left school. Most girls were taught cookery, and as Annie’s school did not have cooking facilities she had to go on the tram down Beeston Hill to another school. It was a winter afternoon and it was getting dark. Annie and her friends were coming home on the tram. She got off at her stop and looked back to wave to her friends who were still on the tram, as she did so she stepped out into the path of a car and was knocked down.

Initially Annie was treated in Leeds Infirmary but was then taken to Meanwood Park Hospital where she had a skin graft. At this time part of Meanwood Park Hospital had been turned into a hospital for injured servicemen. Annie stayed there for, ‘ten weeks, two days and five and a half hours’ as she recorded in her diary. Visiting hours were severely restricted at the hospital, and Annie’s mum was only allowed to visit her once a month, so it was a very lonely and unhappy time for Annie.

Annie was excited to return to school, but she recounts in her diary an incident that happened on her first day back after the accident:

‘I got caned, it was because I got the giggles. I’d been in hospital with my arm and it was my first day back. Betty was making me laugh and I couldn’t control myself. The teacher was reading a poem that we had read before I went in hospital and we had found it really funny, I’d said something to Betty about this poem and we’d been laughing about it.

When Betty was reading this poem I was mimicking her and so when I read the poem she did the same to me and I couldn’t stop giggling! The teacher turned round and saw me. She said, “Stand there.” And she gave me the cane, she hit the arm where the bandages were. My mum went to see the headteacher but the teacher who had caned me didn’t apologise.’

Annie started work on Monday 3 January 1944 aged 14 years old. This was the usual age for starting work at that time. Her first job was at Lister’s, one of the many sewing factories in Leeds. Annie wrote in her diary:

Annie actually found the war quite exciting. Her dad was away, and it meant that Annie and her mum could do whatever they liked. They seem to have spent a lot of time going to the ‘pictures’ (cinema) with their friends.

There were many street parties across the country on Victory in Europe Day. The photograph below is the party that took place in Marley Place Beeston. Annie’s mum is standing at the back on the right of the man in the bowler hat. Everybody would have scraped together their best rations to contribute to the party so that they could celebrate in style. 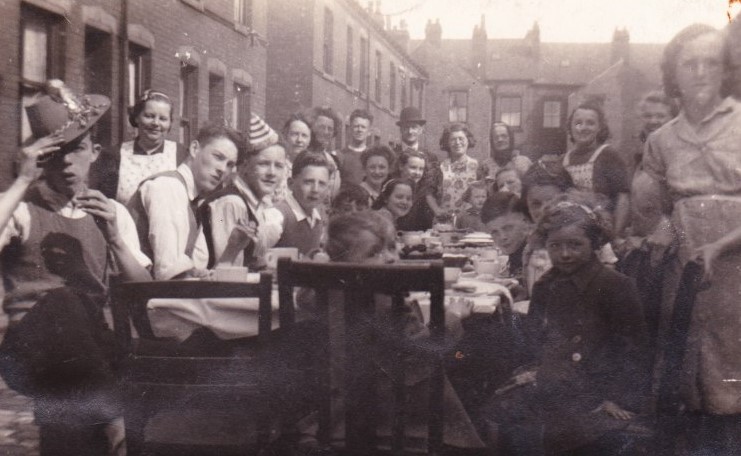 Beetle drive: ‘beetle’ is a dice game about drawing beetles. It was often played in large groups, with prizes for people who completed their beetles first.

Finishing (textiles): a process or processes that take woven or knitted cloth and make it ready for use.