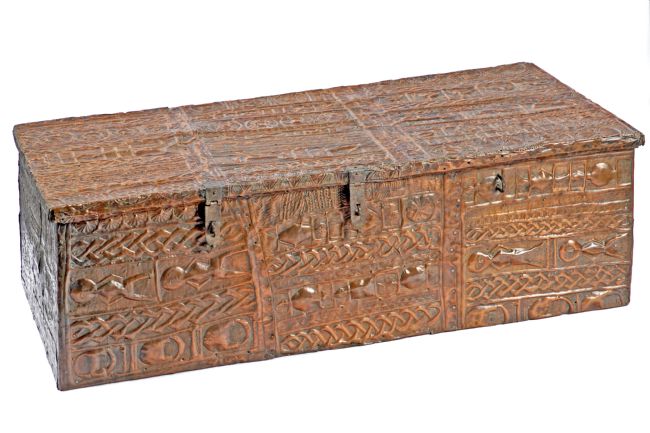 This treasure chest has an intriguing story to tell - of colonialism, culture, trade and trickery! It comes from the Asante Empire, which thrived from 1750 onwards, in what is now modern day Ghana.

This copper-covered chest was used by for storing items of value or importance (gold jewellery, fine cloth and ceremonial swords). However, when the chest was taken from the Asante by British Army officers in 1896, at the end of the Asante war, it was empty! The Asante knew the British would steal valuable items as spoils of war, so they hid them, leaving behind the empty treasure chest.

The soldiers who took away this chest also found a bronze jug, made in England in the 13th Century. We still do not know how it came to be in Kumasi in 1896.

Who are the Asante?

The Asante Empire developed as a union of many small kingdoms, overseen by one strong central ruler, the Asantehene. The Asante gained control of the gold mines and gold trade in their region, and overpowered their neighbours. When the British began establishing their overseas empire, they wanted to control local trade and tried to do so by waging war with the Asante.