St Dunstan’s worked with several artists, who created designs for the charity’s collection boxes and publicity material. The image of the ‘Three Happy Men of St Dunstan’s’, pictured below, was taken from a design by Harold Copping, a British artist and illustrator. The image shows the charity's main aim – a happy future for their blinded members. 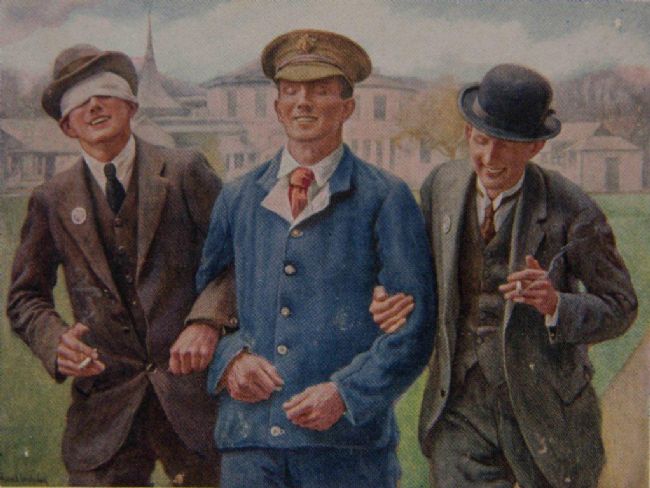 One artist even donated a cartoon character to St Dunstan’s. ‘Old Bill,’ a curmudgeonly soldier with a walrus moustache and balaclava was created by Bruce Bairnsfather, inspired by his war service with a machine-gun unit in France.
‘Old Bill’ featured in humorous cartoons about life in the trenches for The Bystander magazine, and Bairnsfather pledged the popular character to a fundraising campaign for St Dunstan’s, to decorate two boxes. 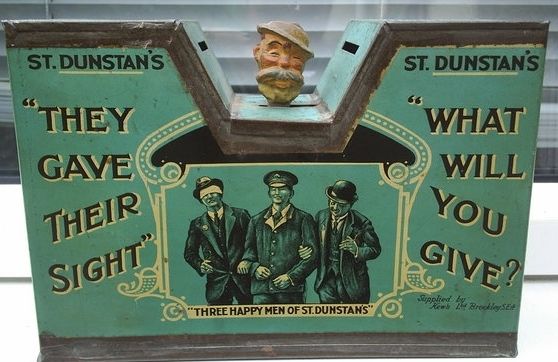 Collection Box for St Dunstan's
The character was also used by the ‘Old Bill Fraternity’, a club in which members paid a subscription to regularly purchase items made by St Dunstaners. A special Bairnsfather cartoon appeared on the membership cards.

Amy Foster, a young girl from Burnley in Lancashire became famous when she collected thousands of pounds for ex-servicemen’s charities during the First World War. Amy Foster was born in 1906, one of a family of eleven children. Every weekend Amy and her mother would stand in the town centre with collection boxes and selling small items, asking for contributions from local townsfolk. 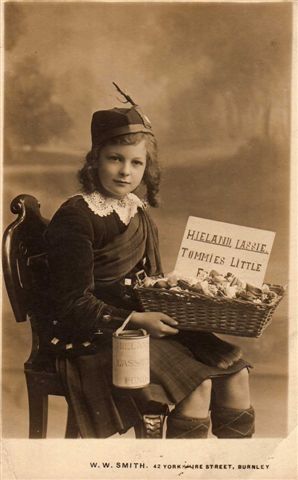 Amy Foster Fundraising for St Dunstan's
Amy gained the nickname ‘Heilan’ [Highland] Lassie’ because she dressed in traditional Scottish Highland clothing. The money she raised was used to send parcels to the soldiers on active service and for disabled servicemen, particularly for St Dunstan’s, which she continued to support throughout her life.