What were the causes and events of the 17th century British Civil Wars?
View resources Teachers notes Share
Add to board
Previous section
The Third Civil War

There were no permanent armies in Britain when the Civil Wars started in 1642. The last time the country had experienced anything close to a full-scale war was the threat of the Spanish Armada 70 years prior. While every county had a local militia called a Trained Band that could be called up when needed, many of these fell apart when it came to choose sides. As such, both the Royalists and the Parliamentarians had to ask for volunteers to fill their armies. Many noblemen who raised regiments forced their tenants and servants to sign up for their side. As the wars went on, both sides introduced conscription, which was extremely unpopular and many men deserted. The New Modelled Army was created by Parliament in 1645. It was the first single, professional standing army under the command of Sir Thomas Fairfax.

Philip Skippon was appointed major-general of foot and Oliver Cromwell was appointed lieutenant-general of horse. It consisted of 22,000 men, but grew as smaller Parliamentarian armies were absorbed into it after the First Civil War ended. Fairfax turned the New Modelled Army into a very efficient and disciplined army, in which officers were appointed and promoted on merit rather than their status in society.

Foot soldiers, or infantrymen, were organised in regiments commanded by a colonel, with each regiment sub-divided into ten or twelve companies of 100 men. In reality, due to a lack of recruits, most regiments were between 400-600 men. Infantry regiments usually had two types of soldier: pikemen and musketeers. For most of the wars, there would be two musketeers for every pikemen, and by the end the New Modelled Army had a ratio of 3 or 4 musketeers to a pikeman. 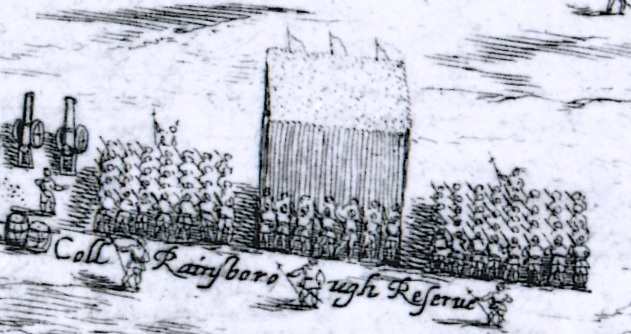 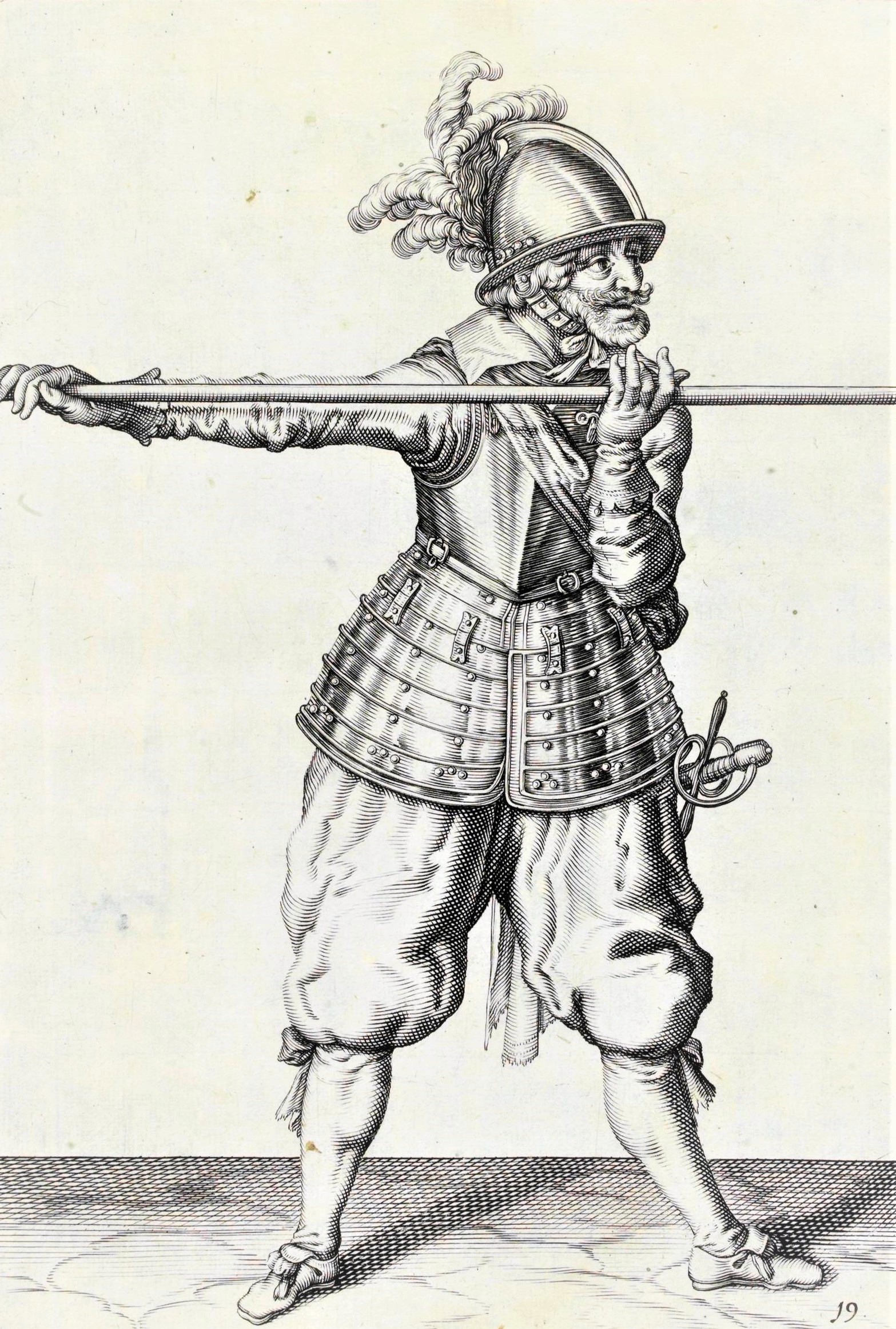 At the beginning of the civil wars, many pikemen were equipped with armour, usually a back and breastplate and often thigh plates. As it was quite cumbersome, much of this armour was rapidly abandoned, and many only wore a helmet when in battle. They were armed with a short sword for hand-to-hand fighting, and a pike, which was a spear 16-18 feet (4.7 - 5.5 metres) in length, make of ash with an iron spear head.

Pikemen fought in formations of blocks of men that could present a forest of pikes to an opponent. Their pikes could be ‘charged’ or levelled against other infantry, and most importantly, they could form a hedgehog of pikes under which musketeers could crouch to defend against a cavalry charge. 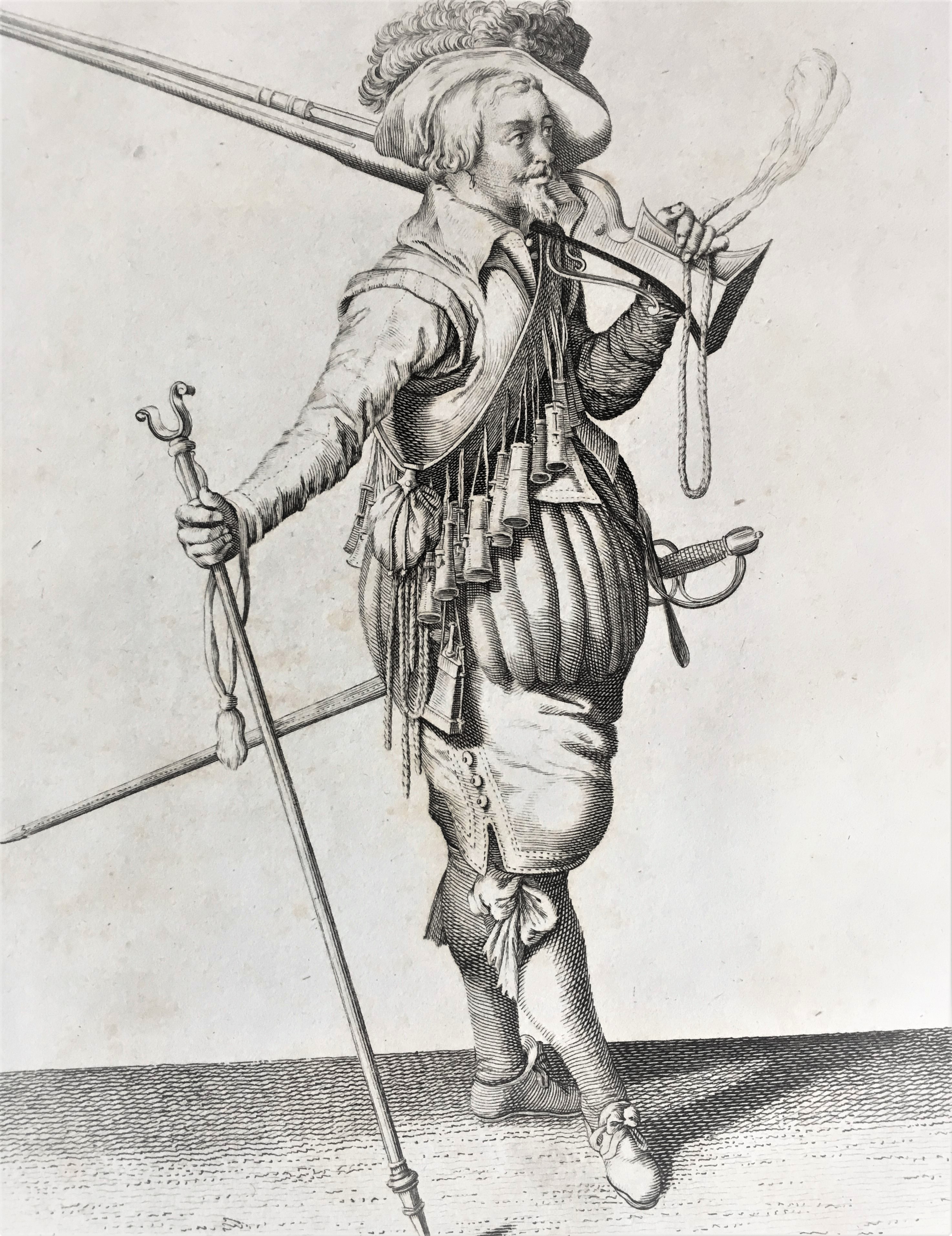 Musketeers were armed with a musket, which was a simple firearm around 4.5 feet (1.4 meters) in length. Muskets were able to fire a lead musket ball weighing about 2/3 oz (18g) using a gunpowder charge. The musket most commonly used was the matchlock musket which was fired by touching a piece of slow-burning match cord to the priming charge.

As the wars went on, the matchlock was increasingly replaced by the more reliable firelock, or flintlock, musket, which used a piece of flint striking steel in the mechanism to create sparks, igniting the priming charge. The musketeer carried his ammunition in a leather bandolier, from which 12 wooden tubes hung, each of which contained enough gunpowder for one shot, as well as a powder flask and a bag of bullets. He also carried a sword for personal defence, although the butt-end of the musket was also very effective as a makeshift club.

A musket could hit and kill a person at up to 300 yards, although it was inaccurate at anything over 50 yards. Therefore, musketeers were usually grouped together to fire in massed volleys, which created a hail of lead that was bound to hit an opponent.

Cavalrymen were also organised into regiments, usually of six troops commanded by a captain, and numbering between 30 and 100 men. Most were equipped as a style of cavalry called harquebusiers, named for the type of gun they were known for carrying. Cavalrymen always carried a pair of pistols, either fired by a flintlock or wheellock mechanism, in holsters in front of their saddle, and a cavalry basket-hilted broadsword. Cavalrymen would be protected by a thick buff-leather coat that would defend against a sword, and/or a back and breastplate. They would usually wear a helmet.

Conscription: the compulsory enlistment of people into the military.