After the Armistice was signed on 11 November 1918, troops began to clear the battlefields of military equipment, weapons and corpses. During the fighting, the military authorities set up war graves registration services to record soldiers’ temporary burial places and once the war had ceased these were moved to large, purpose-built cemeteries. 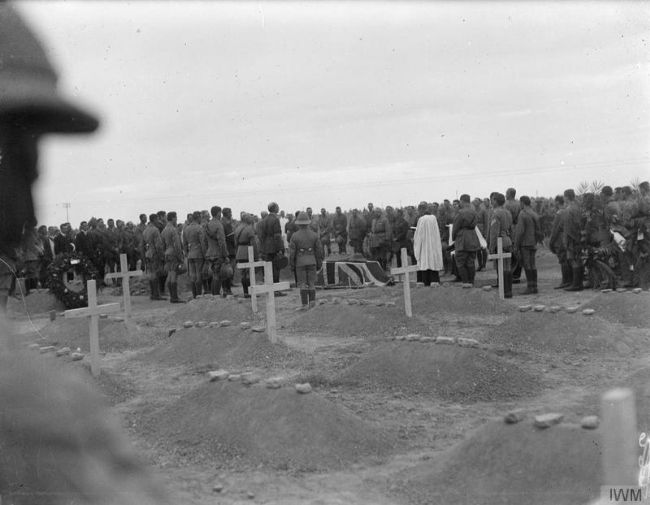 Burial at a War Cemetery in Baghdad
This task was made more complicated by the conditions in which the war had been fought. In trench warfare the fighting had often moved back and forth over the same ground, changing the landscape and disturbing battlefield graves in the process. This was compounded by the muddy conditions, collapsed underground tunnels and frequent explosions of shells and grenades. Some bodies could not be retrieved, while others were damaged or decayed beyond all possibility of identification.
For the men on burial detail, exhuming and burying their former comrades was an extremely difficult and traumatic task. Those who volunteered for the job were paid an extra 2s 6d per day (worth around £5.50 today). ‘For the first week or two I could scarcely endure the experiences we met with, but I gradually became hardened,’ wrote Private J. McCauley, who worked with a burial detail for around three months in 1918.
McCauley described his work in an account which is preserved by the Imperial War Museum:

Often have I picked up the remains of a fine brave man on a shovel. Just a little heap of bones and maggots to be carried to the common burial place. Numerous bodies were found lying submerged in the water in shell holes and mine craters; bodies that seemed quite whole, but which became like huge masses of white, slimy chalk when we handled them. I shuddered as my hands, covered in soft flesh and slime, moved about in search of the disc, and I have had to pull bodies to pieces in order that they should not be buried unknown. It was very painful to have to bury the unknown.

Memorials to the War Dead and Missing