Propaganda and the War Effort

In WW2 the British government saw that boosting morale on the Home Front would be a key part of supporting the armed services overseas. People on the Home Front played a big role in the production of military equipment, so it was vital to maintain both their morale and their faith that the war would be won. 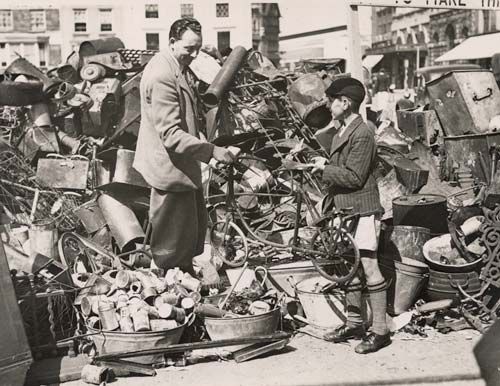 One method of increasing public morale was the organisation of local war effort campaigns. These gave people the opportunity to play a part in the war effort by contributing, even in just a small way. The above photo shows a man and a boy during Northampton Salvage Week. During this week, people were encouraged to donate scrap metal - everything from pots and pans to railings - which would then be recycled to make weapons. 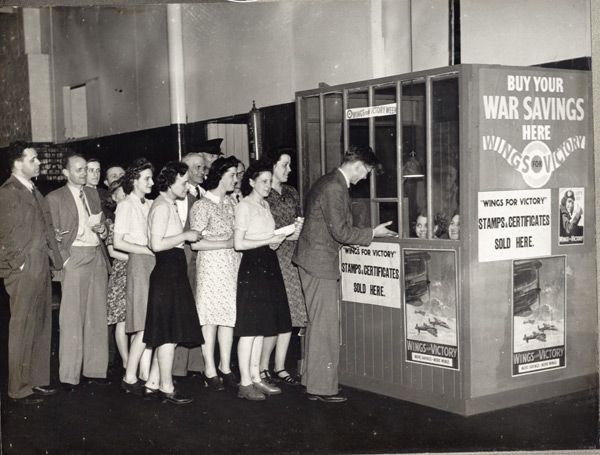 Queueing for Wings For Victory Stamps

In this photo (above), people are shown queuing up to buy their war savings during 'Wings for Victory Week'. This was a nationwide initiative in which each local area was given a fundraising target to raise money to build new aircraft. Both of these events and many others were used to bolster morale and reassure people that the war was going well.

Propaganda was a tool used by both sides in the Second World War both to boost morale at home and to try to lower that of the enemy. On occasions, both sides dropped papers such as this German propaganda leaflet (below), in an effort to reduce public support for the war. 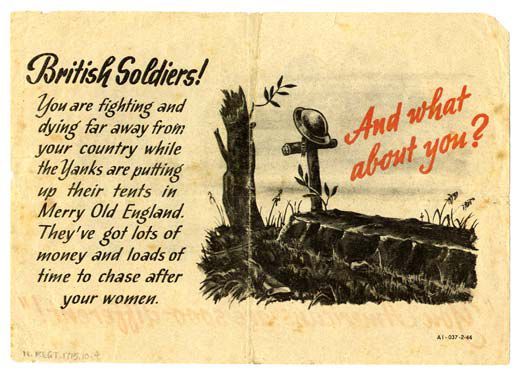 Not all British people supported the war, however. 'Lord Haw Haw', a group of British radio broadcasters based in Hamburg, Germany held negative views towards the Allies and felt that they should agree peace terms with the Nazis.

The government wanted to use the BBC to counter anti-British propaganda. The BBC disagreed, arguing that:

'to put out clumsy rebuttals at the behest of Government would dignify Haw-Haw's propaganda, and undermine the trust of the audience. In the long run, a trusted news source for audiences at home and abroad would be a more potent weapon.'

Behest - an order or request
Contribute - to give something, like money or time, for a purpose
Dignify - to make something or someone seem important
Initiative - plan to achieve a certain goal
Morale -  level of happiness among a population
Potent - powerful, has a strong effect
Rebuttal - to deny or argue against something
Undermine - to weaken something