Clogs and the People who Made Them and Wore Them

There were three main materials used in clog-making at this time; wood for the soles, leather for the uppers and metal for the ‘cokers’ or ‘clog irons’ – the bits of metal attached to the sole for protection.  Albert’s clogs were unusual as he made them from two pieces of leather, so he also needed thread to stitch the pieces together.

Several species of wood were used for the soles, including alder, birch and willow (which is particularly resistant to damp conditions).  The first shaping was done while the wood was still green (not fully dry) which made it easier to work with.

First a rough sole shape was cut from greenwood using a stock knife.  Using greenwood made it easier to shape.   These rough blocks would then be piled up in a pyramid shape, allowing the air to circulate and over a few months the wood would season and harden. 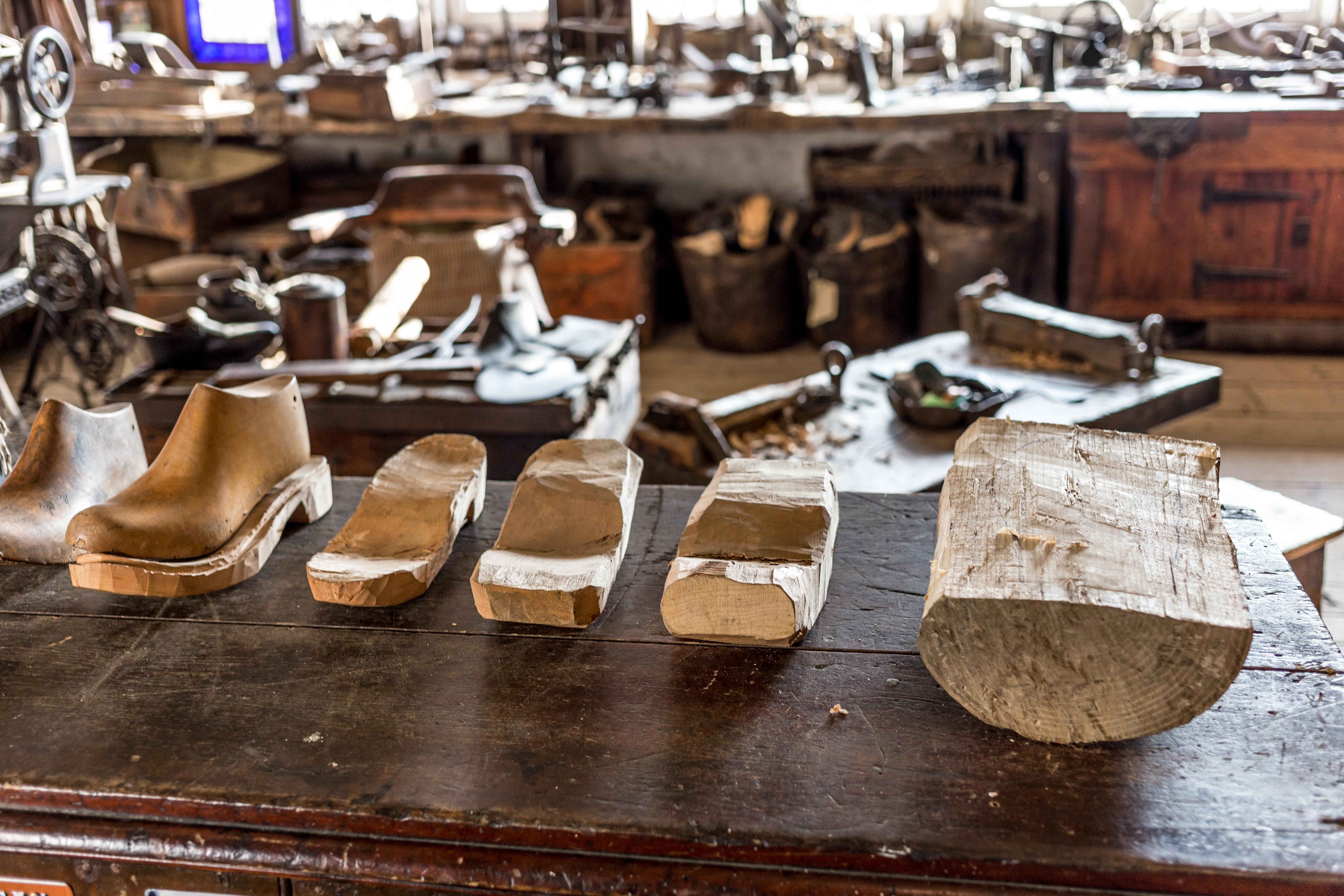 Once seasoned, the blocks were sold to a master clogger, who used a variety of specialist tools including several types of knives, rasps, a clog hammer and a ‘gripper bit’, which carved out the rebate for the leather upper.

Clogs are never made with flat soles – they are made to gently rock the wearer forwards as they walked.  One theory suggests that the more hilly the area that the clog-maker worked in, the more curved the soles were made to help wearers go up and down the hills!

The leather used to make clog uppers is very thick, with the full hide being used. This made it warmer, sturdier and more durable.    Metal patterns were used to guide the clog-maker when cutting out the pieces.  The knife he used would make a clicking sound as it struck the metal, and the process became known as ‘clicking out.

Traditionally, slip-on clogs were made from a single piece of leather, and therefore did not have any seams.  However, Albert made his clogs from two pieces of leather, sewn together to create two flat seams.  The thread was made from multiple strands of hemp, twisted together and then waxed.  Once sewn, the leather is stretched to the correct shape over a last and then pinned into place with metal studs hammered through the leather and into the wood.  Steel ‘toe tins’ are fastened to the end of the clog, to protect the leather when kneeling down, and metal ‘clog irons’ are attached to the soles, to protect against wear and tear.  It is the metal on the soles that creates the distinctive sound associated with clog dancing - and they also produced sparks when struck against cobbles or sets.  A favourite pastime of clog-wearing children was to slide along the roads producing showers of sparks!