In early Victorian England, most poorer children never went to school at all and grew up unable to read or write. Since schooling had to be paid for then, many parents decided they could not afford the few pennies a week it cost.

Instead, children were sent out to work at a young age to earn money for their families.Their earnings were an important part of the family income and if they went to school, their families would lose this money.

1842 Commissioners' Findings on School Instruction for a Mining Community

Many of these children found their only chance to learn anything was at a Church or Chapel Sunday School. Lessons concentrated on the 'three Rs' (reading, writing and arithmetic) and scripture. Children learnt by copying and chanting things over and over again until they were word perfect. 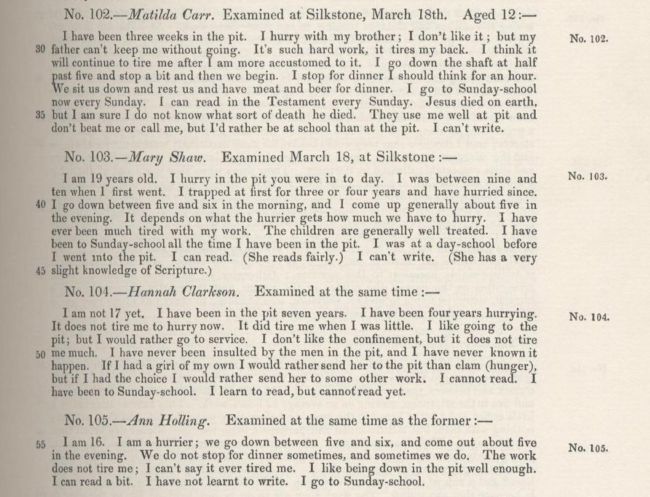 Schooling did not become compulsory for children aged five to ten until 1880. In 1889, the school leaving age was raised to twelve, and in 1891, the school's fee was abolished and schools became free.

Abolish - to put an end to something, perhaps by a new law

Compulsory - when something is required by law or an authority

Concentrated - focus on one thing

Scripture - writing from the Bible

Slate - a small square made of slate, used to write on with chalk, then wiped clean

Use this resource to help you answer the questions below:

Look at the Commissioners Findings for Schooling:
J C Symons Esq interviewed a number of children from Silkstone on 18 March 1840.  Use their interview answers to help you answer the following questions: