Have you ever heard of the Leeds City Council? What do you think it does and how does it work?

Leeds is a really big city that just keeps on growing! At the moment there are around 780,000 people living in our city – that is the equivalent of about 20 big football stadiums full of people. With that many people all living in the same place, somebody needs to make a lot of decisions. In Leeds we have roads, parks, buses, trains, over 280 schools like yours, hospitals, shops, businesses, restaurants, recycling, police and lots more. The bins need emptying every week, the parks and streets need cleaning, the people need houses and jobs…and many of these things cost money to do. There are a lot of decisions to be made.

Can you think of ways that this many people could make big decisions? What ideas do you have?

To make the best decisions for the people of the city, Leeds has its very own group of decision makers called councillors. They are a bit like school councillors in your school but they have to make decisions for the whole city – it is a very hard and very important job! 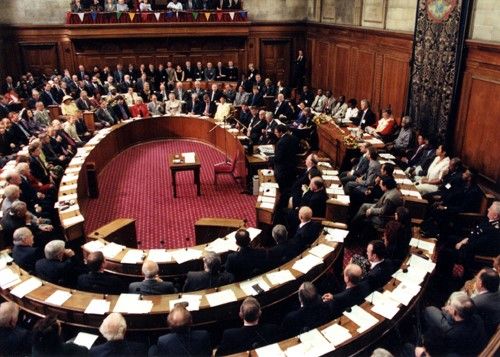 But how do people get the job of being a city councillor? Well, just like with school councils, city councillors get their jobs through a process called democracy.

The word democracy started in ancient Greece with two different Greek words – “Demos” which means “The People” and “Kratos” which means rule! Put them both together and you get “DemoCracy”!

What do you think would happen without democracy? Who would choose the people to make the decisions and how would they make it fair?

Who has voted in an election before? What qualities and skills do you think someone running for election should have?

Here in Leeds, everyone aged 18 and over can vote in an election to pick who they want to be their representatives, their city councillors. In total, there are 99 Councillors in Leeds. Why 99?   Well, Leeds is actually split into 33 small areas called “electoral wards”. The people who live in each ward elect 3 councillors. There are 33 wards each with 3 councillors so there are 99 in total! Do you know who the 3 councillors are for your area of Leeds? – you can find out who they are here

All 99 city councillors meet together ten times a year in a big room in the Civic Hall called the Council Chamber. They use these meetings to make lots of big decisions.  What kinds of things do you think they decide in their meetings? If you were a city councillor what would you want to improve for the residents in your local area and how would you find out what needs improving?

You can use democracy in school to elect your school council or take part in the Children’s Mayor Elections every year. Perhaps you could hold a mock election where pupils form teams, choose an issue that is important to them and then campaign for votes?  Maybe even your whole school could use democracy in assemblies to make decisions so that everyone in your school has a say and can influence what happens?

The Two Mayors of Leeds