One of the earliest women's football teams in England

A leading British manufacturer of light railway equipment, the firm of Dick, Kerr and Co Ltd was named after its founders W. B. Dick and John Kerr. The firm was originally based in Scotland before relocating to Preston. By October 1914 the Dick, Kerr factory, like so many others, was changing to produce munitions for the war effort. The production lines were converted to the manufacture of munitions and a new workforce of uniformed women was recruited to staff the factories. 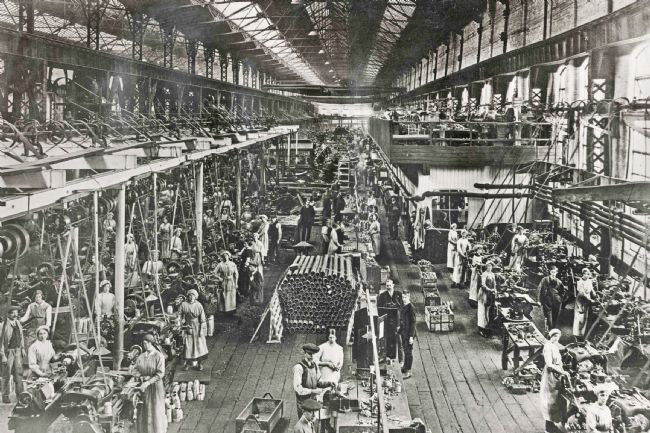 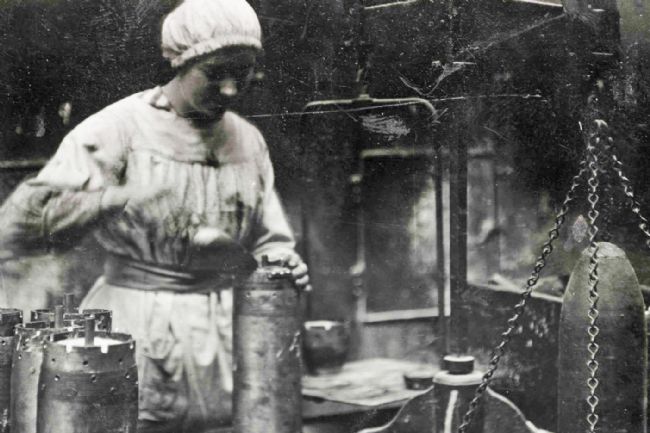 A 'Munitionette' filling shells during WW1

Women were drafted in large numbers into the towns to work in the munitions factories. Known as 'munitionettes,'  these women found a new comradeship and teamwork born out of the hardship of the work. In order to encourage this new workforce to focus on munitions production, it was felt that the young women needed some kind of sporting release to run off their excess energy. 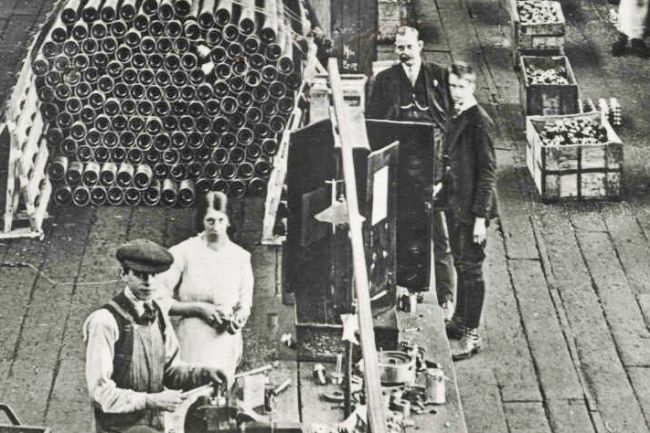 Workers at Dick, Kerr's & Co munitions factory
Work-yard football games were popular, with games being squeezed into factory lunch breaks every day. The women were even playing against men, a practice officially banned by the Football Association (FA) in 1902.

Office administrator Alfred Frankland had watched the women’s yard games from his office window at the factory and approached the works manager to organise a charity match for them against another ladies team.

A team of male munitions workers from Dick, Kerr had already played a charity match against the mighty Preston North End team on Easter Monday 24 April 1916, at their home stadium Deepdale. This was attended by thousands of spectators. Frankland’s idea was to hire Deepdale for a ladies charity match on Christmas Day 1917.

Ten thousand spectators passed through the turnstiles to watch Dick, Kerr’s beat Arundel Coulthard Foundry 4-0. The match raised in excess of £600 for the hospital, a staggering sum worth over £120,000 today. Soon Dick, Kerr's Ladies were playing in front of large crowds and were becoming famous.

Florrie Redford, a glamorous blonde centre-forward was regularly featured in the newspapers of the day.

Outside left Lily Parr was described by the Daily News as 'a 15-year-old with a kick like a Division One Back'.

Inside left player Jennie Harris was an expert dribbler and quick on her feet. Dick, Kerr’s were building a reputation as one of the game’s most impressive sides. Charitable causes were benefiting from these games and women’s football was flourishing with many new teams.

Alfred Frankland claimed that Dick, Kerr's Ladies raised over £50,000 during WW1 for various charities, and the team continued after the war, playing a French touring side at Deepdale in 1920 in front of 25,000 spectators. They won 2-0. On Boxing Day 1920 they played St Helens Ladies in front of 53,000 spectators at Goodison Park, winning 4-0. It  was said that over 10,000 more eager fans were locked out!

It appears the numbers attending women’s football was seen as a threat by the Football Association and on 5 December 1921 women were banned from using league grounds.

The FA finally recognised women’s football in 1971, but this was far too late for Dick, Kerr's Ladies who, playing as Preston Ladies FC since 1926, had folded as a football club in 1965.

In 2002 Lily Parr was one of the inaugural inductees in the English Football Hall of Fame and Joan Whalley, another of Dick, Kerr's Ladies was inducted in 2007.

Charitable - generous, giving
Comradeship - friendship
Inaugural - first
Inductees - someone who is formally given a place or position
Munitions - weapons and guns
Turnstiles - a mechanical barrier designed to let people pass through a narrow opening
Next section