"Never doubt that a small group of thoughtful, committed, citizens can change the world. Indeed, it is the only thing that ever has".

This quote, from Margaret Mead, has been used to inspire generations of people to take action on matters they feel strongly about. Today, world leaders and large corporations are being held to account for their inaction on climate change by Swedish activist Greta Thunberg. Greta was only 15 when she started protesting against climate change outside the Swedish parliament. Fast-forward one year, and she was holding the floor at the 2019 United Nations Climate Change Conference. Greta’s book, ‘No One Is Too Small to Make a Difference’ was also published in 2019.

The power of young people to change the world has long been recognised, and children’s books have played a part in many campaigns and transformations in culture and society.

Please note this section includes an image from a 19th-century children’s book that depicts slavery and contains historic language which is considered offensive today.

In the 18th century, Britain was heavily involved in the transatlantic slave trade. African people were captured and sold into slavery then forced to work on plantations in the Caribbean and Americas. Their slave labour supplied British people with, amongst other things, sugar, cotton and rum, and underpinned income and wealth across Britain.

We now recognise that human trafficking and slavery is fundamentally wrong. The Society for Effecting the Abolition of the Slave Trade was formed in 1787 to fight against the injustices of the slave trade. They produced many books and pamphlets, and one of their most popular publications was a poem by William Cowper, called ‘The Negro’s Complaint’. (Historically, the word ‘negro’ was used by Europeans to denote people of African descent, including enslaved people. The word has different histories of use and meaning. In this example, however, its usage is considered offensive today, and is used here only in its historical context.). The poem was printed in newspapers around the country, and widely sung as a ballad. It was also reproduced for children with a coloured woodblock illustration for each of the poem’s stanzas. 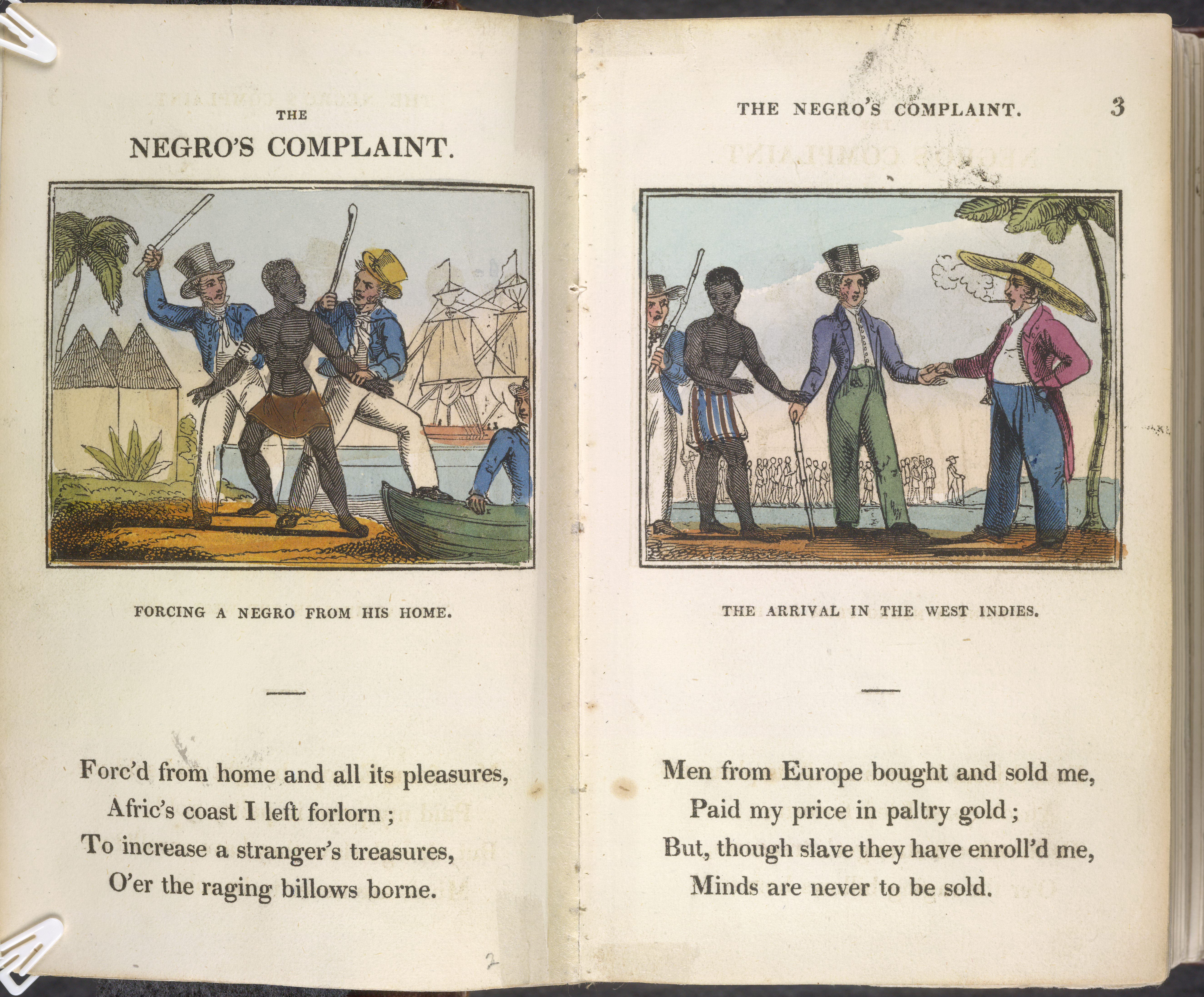 Pages From 18th Century ‘The Negro’s Complaint’ by William Cowper

Cowper’s poem contributed to the education of wide sections of the British public, including children, about the horrors and reality of slavery, and sought to establish a more equal view of Black African people amongst the largely white British population. However, books such as this are complex: despite their anti-slavery message, many still contained damaging racial stereotypes.

Children’s books have also shown the need for social change to challenge gender stereotypes and sexism. Many early stories for children often featured strong gender stereotypes, such as boys going on adventures, while girls stayed at home learning home-making skills. Books and magazines were (and still often are) classified as being ‘for girls’ or ‘for boys’.

The campaign to secure the right to vote for women occurred during the late 19th and early 20th centuries in England. Despite it being a time of huge political and social change, only one children’s book was published that focussed on the suffrage movement at the time. Kathleen Ainslie wrote ‘Votes for Catharine Susan and Me’ in about 1910. All the characters in the book are peg-dolls, with the two female protagonists joining the suffragette movement and fighting for the right for women to vote. 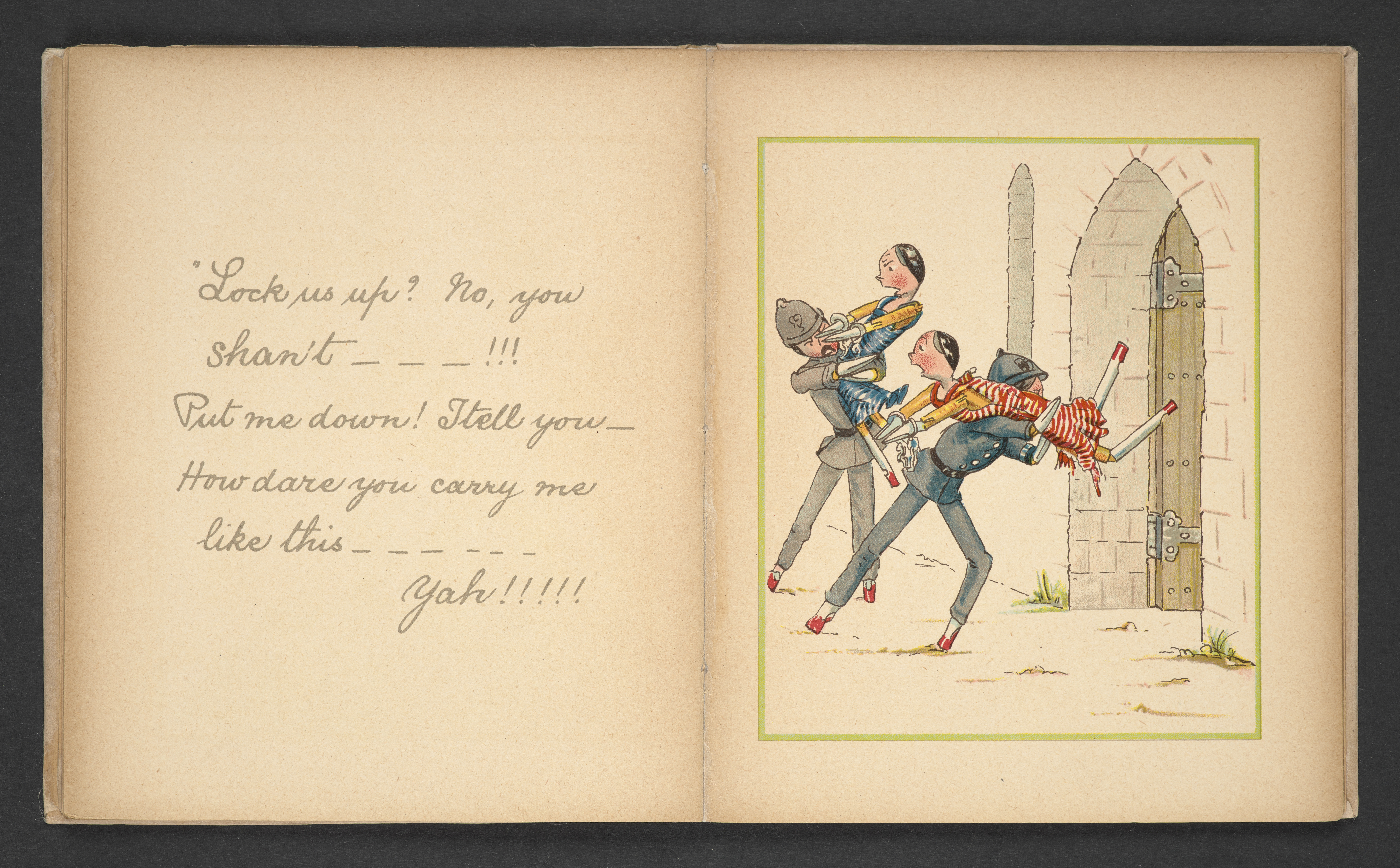 Page From 'Votes for Catharine Susan and Me' by Kathleen Ainslie

The book is not necessarily sympathetic to the suffragettes, but it tells of the struggles faced by suffragettes at the time, as the characters fight with policemen, carry out militant activities such as smashing windows, and ultimately get arrested and imprisoned, where they go on hunger strike. Here however, the story in the book diverges from the actions of many suffragettes. In the book, the peg dolls leave prison after agreeing to ‘go home quietly’. In reality, the suffragettes often left prison weakened from lack of food, but once recovered, continued to fight their cause.

The BBC Radio 2 story writing competition for children aged 13 and under, ‘500 Words’, has provided children everywhere with a platform on which to share their ideas and stories. In 2016, so many children chose to write stories tackling the themes of forced migration, asylum and refugees, that Oxford University Press named ‘refugee’ as their children’s word of the year.

In 2020, the story ‘The Winning Goal’ written by Shachar Applebaum was judged one of the top 50 entries in the aged 5 – 9 category. It tells the story of a young Syrian girl living in a refugee camp after being forced to leave her home due to war. Despite the harsh reality of her situation, she dreams of becoming a professional footballer. The prevalence of stories themed around refugees and migration in the 500 Words competition, show how invested children can be in the world around them, both on a local and global scale.

Malala Yousafzai became a globally recognised figure when she was shot by a member of the Taliban in 2012 at the age of 15, while travelling on a bus home from school. An activist for female education, Malala had written a blog about life under the Pakistani Taliban and subsequently defied the Taliban’s ban on girls receiving education. She survived the attack, and was flown to England to receive specialist medical attention. Once recovered, Malala continued both her education and her activism. Just a year later she published her international best-selling book ‘I am Malala’. At 16 she spoke to the UN to call for worldwide access to education and at the age of 17, she become the youngest ever recipient of the Nobel Peace Prize.

There is no doubt that stories written for and by children have the potential to shape the views and change the lives of those who read them.

Taliban: An armed terrorist group who, amongst other things, do not believe that women should be treated as equals to men.