Benjamin Gott was born in 1762 into a society where many children as young as six had to work. Luckily for Gott, as his father was a civil engineer the family were well off.

Benjamin attended Bingley Grammar School until he was 17. When he finished his schooling, Benjamin's father apprenticed him to a firm of wool merchants. The picture below shows Gott’s indenture of apprenticeship, which stated: 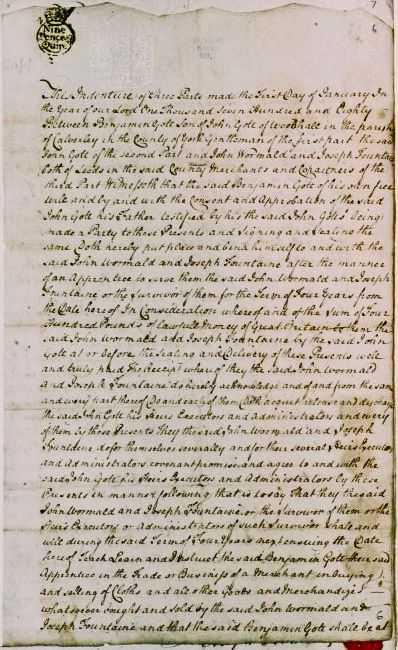 The said Benjamin Gott of his own free will and with the covenant and approbation of John Gott his father doth hereby put place and bind himself to and with said Wormald and Fountaine in the manner of an apprentice.

As you might guess from the use of words like ‘bind’ and ‘covenant’, in those days becoming an apprentice was a serious and costly business. An indenture was a legal document that bound apprentices to train with a master craftsman or tradesman for a period of time, usually seven years. 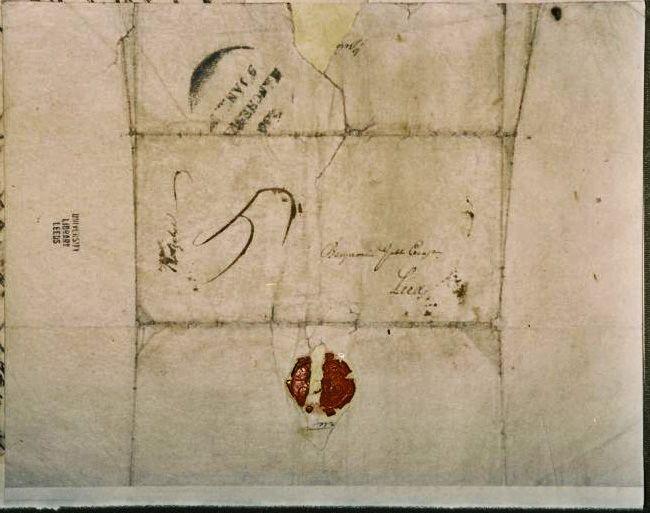 Gott´s Apprentice Papers Front Cover 1779
By signing the indenture Benjamin had to obey his masters, and pay £400 in fees for the privilege! During his training Gott was able to observe business dealings, examine the accounts and travel everywhere with his bosses.
It might sound like Gott had an easy job travelling about the countryside, but while he was an apprentice his father had to pay his expenses so he wasn't travelling in style. This was long before the railways came to Yorkshire, so people travelled on rough roads by carriage or on horseback.

From Apprentice to Partner

By the time Gott finished his apprenticeship he was 21. He now understood all aspects of the wool trade and had travelled widely in England. His bosses were obviously impressed by Gott, and offered him the opportunity to become a partner in their firm for £3,600.
His partnership contract read:

‘from the great confidence they have in the integrity, honesty & abilities of the said Benjamin Gott we have agreed to take in and enter into co-partnership for the term of five years.'