Exploring the role of circuses in leisure and entertainment, with a focus on circuses in Leeds
View resources Teachers notes Share View related stories
Add to board
Previous section
The First Black Circus Owner to Perform in Leeds

There were many different sites around Leeds where circus’s set up and performed. Here are some of the central Leeds locations.

Philip Astley, the father of circus, toured Britain and performed at this site in September 1773.

After the disaster, Mr Harwood took the lease on the site and developed the Princess’s Theatre, where both variety concerts and occasional circus shows were given.

Mr Kite erected his New Olympic Circus on ground between Commercial Street and Boar Lane in June 1810. He returned again in 1811 when he opened a ‘commodious circus’ on the same site. As well as running his own circus, Mr Kite was an adept performer and appeared with several companies during his lifetime. Pablo Fanque later did a benefit performance for Mr Kite. His name is now immortalised by the Beatles in their 1967 song ‘Being for the Benefit of Mr Kite’.

There are two references to a site at the ‘top’ of Albion Street being used for circus performances, in 1811 and 1812. Bannister and West presented their Olympic Circus in the July of both years. This circus had earlier appeared at Astley’s Royal Amphitheatre in London and included two of the earliest ‘star’ female performers; the Bannister sisters. Miss S. Bannister was a renowned performer on the slack–wire, and her sister, just plain Miss Bannister, was an accomplished horse rider and performer.

One of the first references to a circus on Boar Lane was for Mr Adam’s New and Elegant Circus, near the Lancastrian School, in 1816. Cooke’s Olympic Pavilion opened in June 1822 and Cooke regularly presented performances at this venue for the next twenty years. The circus was often rebuilt and in February 1841 it was announced that there would be the ‘erection of a spacious circus on the vacant ground between Trinity Street and Bank Street … for the use of Mr Cooke’s superior equestrian stud’. Many other circus companies used this site through to the 1860s including: Batty’s New Circus Royal; Franconi’s Cirque National de France (the Franconi’s were the ‘founding fathers’ of the French circus); Pablo Fanque’s Royal Circus; Bell’s Great United Hippodrome and Circus; and Sanger’s Grand Circus. 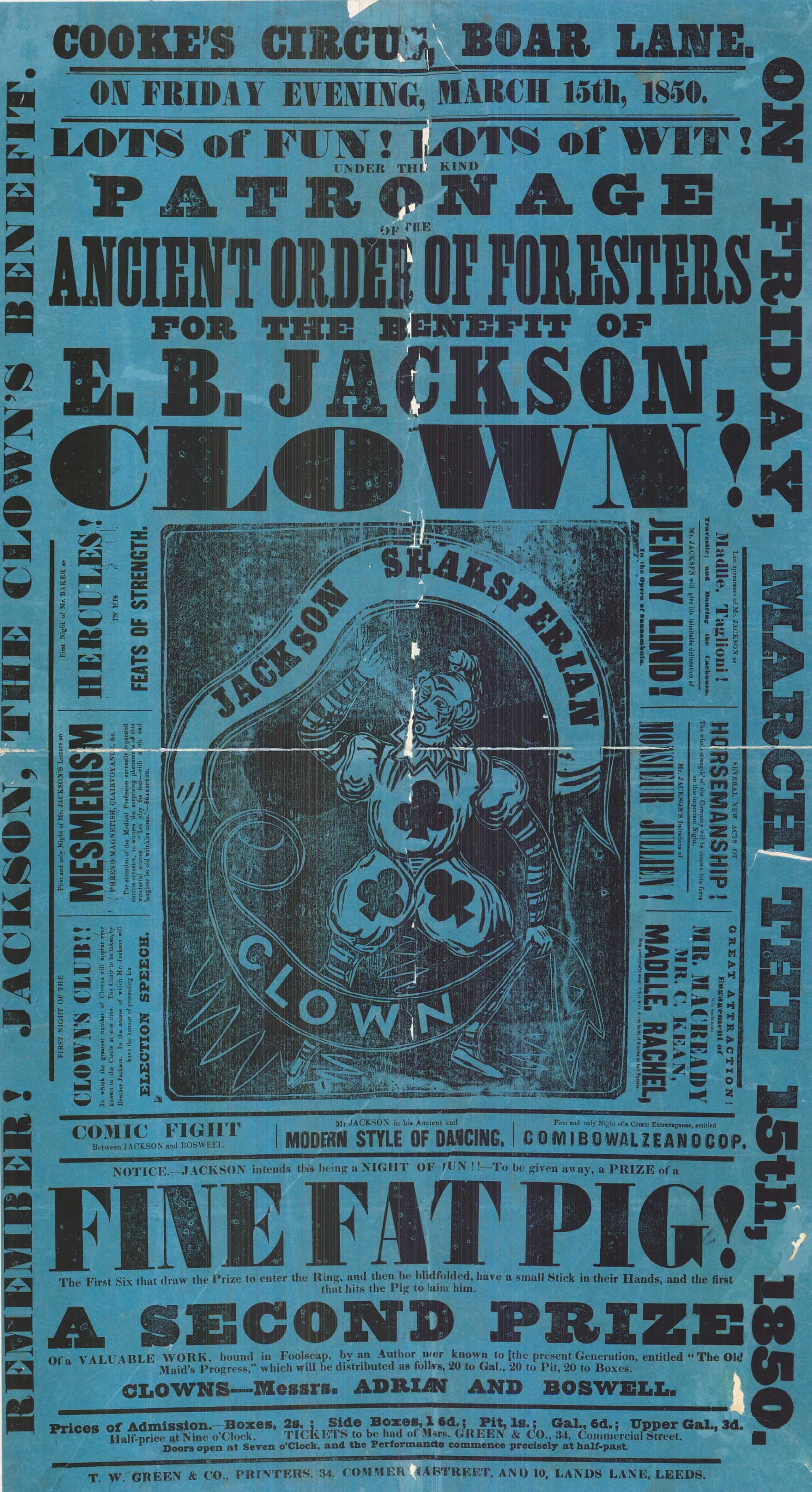 Poster from 1850 for Cookes Circus in Boar Lane

Basinghall street (the back of Park Row)

Ryan’s Royal Equestrian Circus opened at this venue from September to December 1832. The police were in attendance at performances to keep order and the building was brilliantly lit by gas. During his stay, Mr Ryan gave a benefit for the Leeds General Infirmary and raised £8, the proceeds of one evening’s performance. Acts seen were varied and included a Master John Bridges, a child of only four years old, who appeared as the ‘Lilliputian Bonaparte’, and a strong-man named Louis Valli who could lift a weight of 400 lbs. from the ground.

During the spring of 1834, the circus entrepreneur Mr Cooke opened a short lived venue on Vicar’s Croft, where he presented his New Royal Circus, or Royal Equestrian Circus as it was sometimes advertised. This site appears to have been used for one season only. The original site of Vicar’s Croft now lies beneath Kirkgate Market.

The White Cloth Hall was once the West Riding’s premier cloth market. Its open yard provided an occasional venue for Pablo Fanque’s Allied Circus between 1856 - 1858.

This site, between Headingley and Burley, began life as the Leeds Zoological and Botanical Gardens. The site was bought in 1858 by a young entrepreneur, Thomas Clapham. He changed the name to the Royal Gardens and placed emphasis upon popular entertainment and fun. During this period both William Cooke’s Circus and Pablo Fanque’s Circus made appearances here. 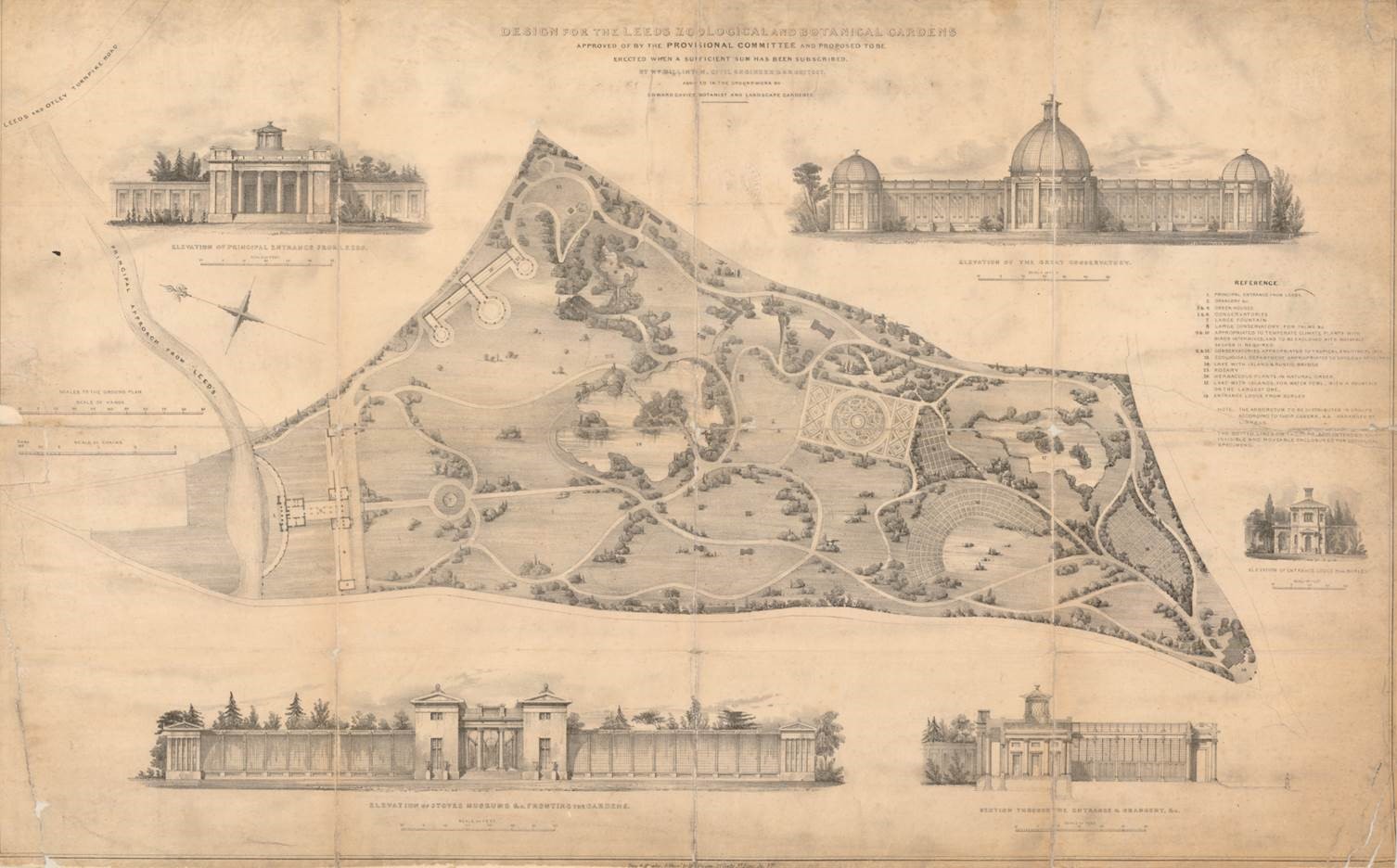 Design for the 1858 Leeds Zoological and Botanical Gardens

In 1867 Mr Newsome first presented his Grand Circus on a site that is directly opposite the Mechanics Institute (now the City Museum). Special ‘circus trains’ were laid on every Tuesday and Saturday at 11pm to transport the circus goers home to Huddersfield and Halifax. Many other circus companies used this venue as well including: Sanger’s Grand New Circus; Pablo Fanque’s Mammoth Circus; Tannaker’s Great Dragon Company and Japanese Troupe; Hengler’s Grand Cirque Variete; and Henry & Adams Grand Circus. In October 1876, Charles Adams bought the site from Mr Newsome and redeveloped it, presenting his New Circus. The new building was big enough to accommodate 5000 people. It was later known as the Hippodrome and Circus or the Leeds Circus Building. The building was later developed as a variety venue, and then a cinema, and later a night club. The front of the building can still be seen today.

This was situated on North Street on the northern edge of the city. It provided ample space for visiting circus companies. In the 1860s and 1870s it played host to several companies including: Sanger’s Zoological Hippodrome and Mammoth Circus; Mander’s Grand National Star Menagerie; Footit’s Great Allied Circus; and Howe & Cushing’s United States Circus.

Howe and Cushing circus was one of the first American circuses to visit Britain. In 1919 the famous American circus belonging to Barnum and Bailey paid a visit, and in 1922 Frank Bostock’s Circus was also there. The site of the Cattle Market is now an open space known as Lovell Park.

Charles Adams opened his Grand Circus on the site in New Briggate that is now occupied by the Grand Theatre. He ran his circus here for only two years, from 1875 – 1876, until the site and the neighbouring land belonging to the Tramway Company was bought for the construction of the new theatre. 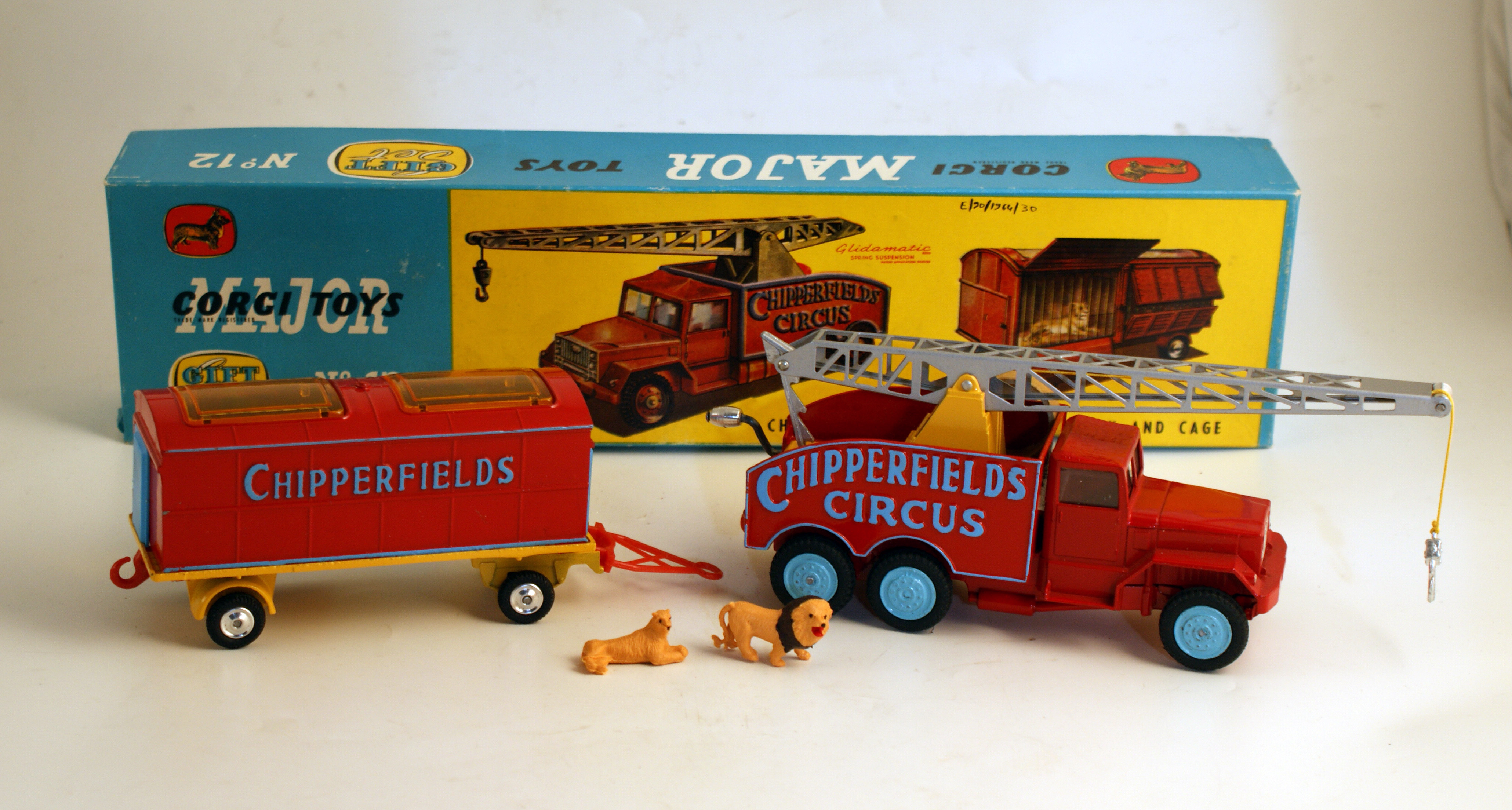 A circus building, known as the Victoria Amphitheatre, was erected on the new road to the joint railway stations in Leeds in 1882. It could hold two thousand people and had three entrances. The ring was 42 ft. in diameter. The circus was 48 ft. high, with a length of 152 ft., and a breadth of 56 ft. The circus was built for ‘Sir’ Robert Fossett’s New Grand Cirque. The Fossett name is well known in the circus world and their circuses have gained a worldwide reputation across the years. One branch even has the title of ‘Ireland’s National Circus’.

To the west of the city centre, Cardigan Fields was an open piece of land in the Kirkstall area. Buffalo Bill’s Wild West show used this site on two occasions, 1891 and 1903. Local people were amazed to see a small herd of buffalo grazing on the banks of the river Aire! Earlier, in the 1860s, Tom Sayer’s Circus visited the site. Tom Sayer was a famous Victorian bare-knuckle fighter. When he retired from fighting, he invested his money into a small circus and for a short time worked as a clown. Unfortunately he died only a few years later in 1865.

Now the home of Harvey Nichols Department Store, this old theatre was used for many variety shows but also for the circus. As early as 1900, Dainez’s Circus appeared there. In the 1930s Bostock’s Royal Circus, Lord John Sanger’s Circus, and Chapman’s Colossal Zoo-Circus performed at the Empire.

The Engineer’s Drill Hall played host to the Royal Italian Circus in 1913. The Drill Hall has long gone and the area redeveloped. Interestingly the First Direct Arena, built over the area, has in recent years been the venue for the Canadian contemporary circus company, the Cirque du Soleil.

As Leeds city centre grew in the twentieth century, vacant ground was difficult to find for touring circuses. Woodhouse Moor became one of the best locations for many companies. After the war the circus industry was dominated by the ‘Big Three’; Bertram Mills Circus, Chipperfield’s Circus; and Billy Smart’s Circus. All three of these were regular visitors to Woodhouse Moor and drew large crowds. 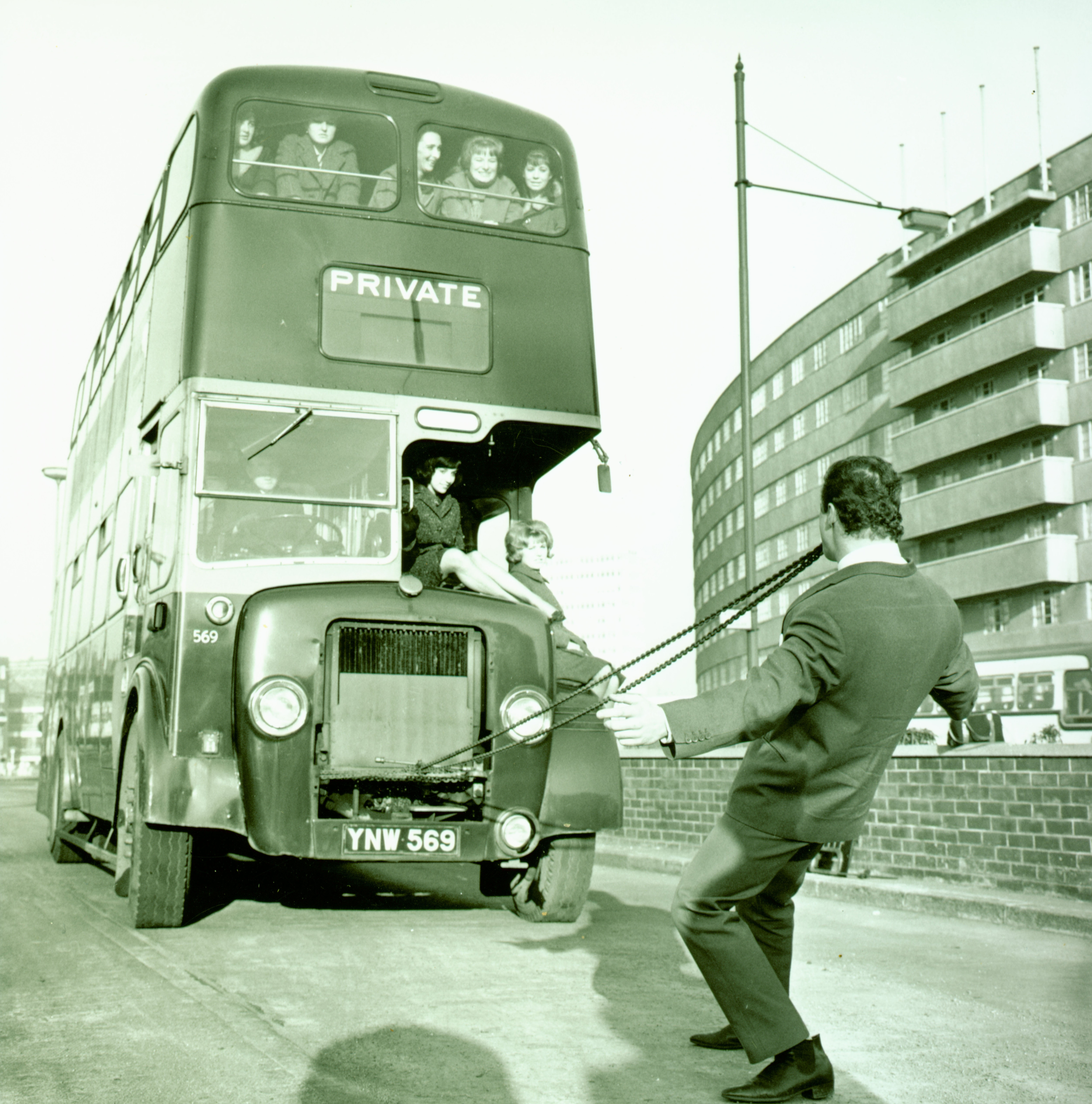 Billy Smarts Circus Performer Pulling a Bus with his Teeth

The circus processions, from the Leeds Railway Station up to Woodhouse Moor attracted large crowds, all dressed in their Sunday best to witness the event. Other well-known companies have visited this site including The Moscow State Circus, the Chinese State Circus, Cottle & Austen’s Circus and Circus Ethiopia. 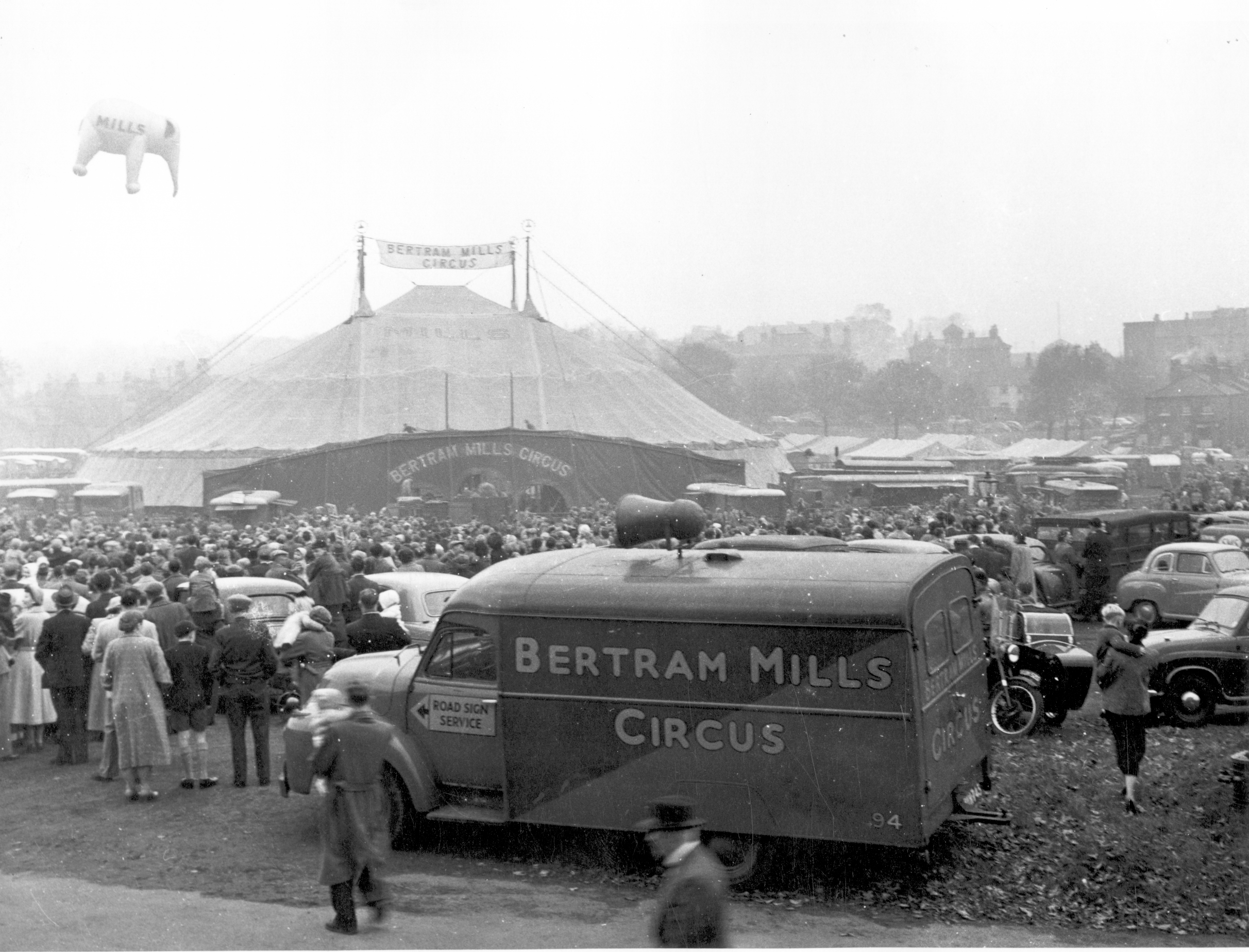 “I remember this well.  I was a girl who lived opposite Woodhouse Moor 50 yards away in Delph Street, whenever the circus came, the lions and tigers used to keep us awake at night with their roaring, and we used to go watch the elephant being scrubbed by the keepers. So exciting!”

Now home to a multi-story car park, this site was occasionally used for circus performances.  Bertram Mills Circus and the National Circus appeared here in the 1920s and 1930s.

Bostock's Circus was once held on vacant ground, now home to the neighbouring bus station, opposite the Lloyd’s Arms.  The landlord, Thomas McDonald, (c1912 -1920) allowed the elephants to be scrubbed and hosed down in his stable yard

This old music hall theatre in the city centre has also hosted occasional circus performances. Madame Hengleur’s Circus was to be seen there in 1931 and Clown Decar’s Miniature Circus performed in 1934. In more recent times, in 1995, the City Varieties was given over to a complete week of circus performances as part of the INNOV8! International Youth Circus Festival, with performing companies from seven different European countries taking part. 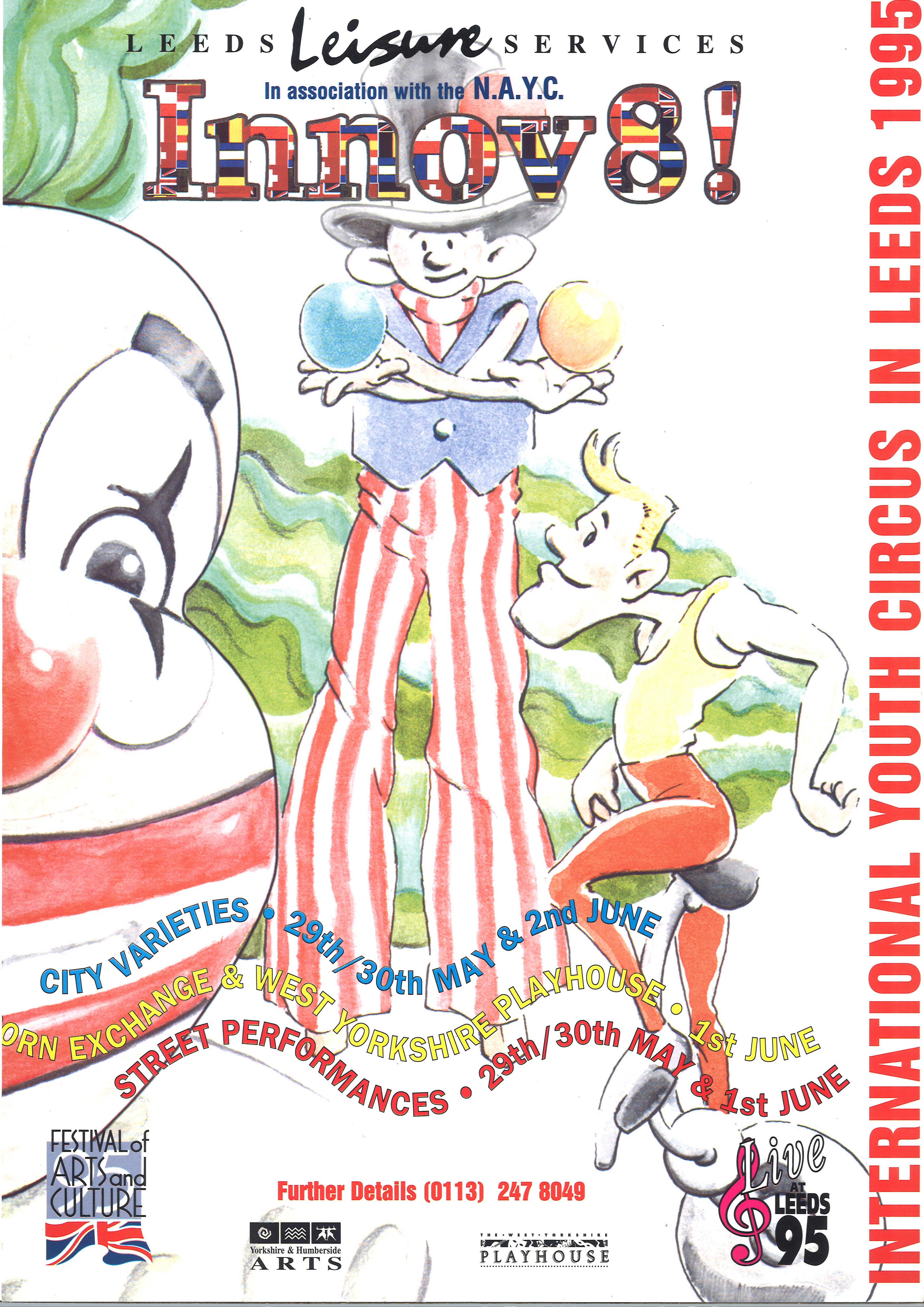 Poster for the 1995 International Youth Circus

The Queen’s Hall was originally the headquarters of Leeds City Tramways. In 1961 it was redeveloped and opened as a new exhibition hall, and renamed the Queen’s Hall. It has housed many varied events and exhibitions. In 1963 it hosted the Beatles and Billy Smart’s Circus! 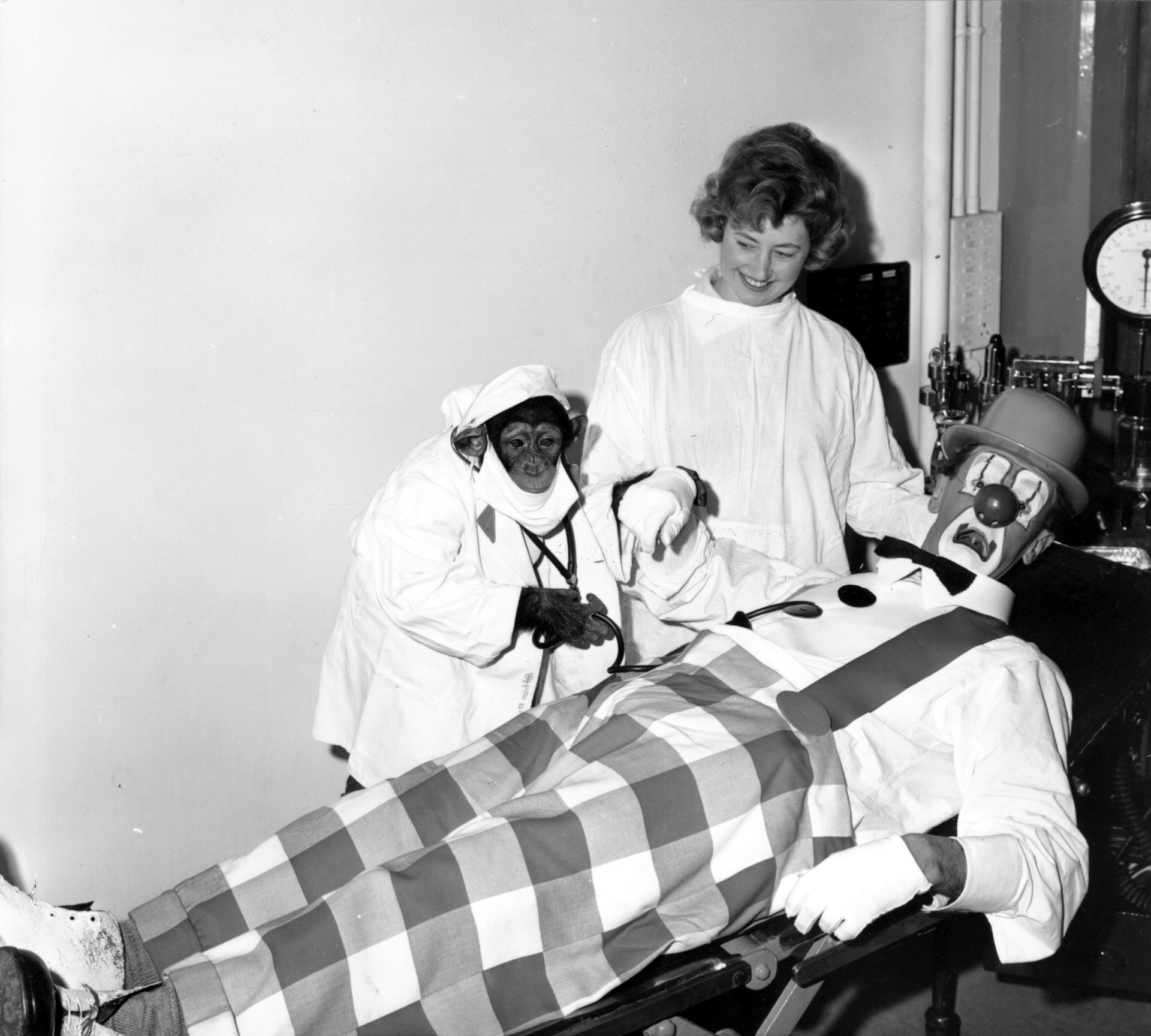 Knoble the chimp and Spuggy the clown from Billy Smart's circus

The image above shows Spuggy, the clown at Billy Smart’s Christmas Circus, being treated by Knoble the chimp, assisted by Daphne Murgatroyd, an assistant at Leeds General Infirmary.

A Leeds Circus Family – The Denvers