North West Passage: Where is the Inuit Voice?

In 1574, Martin asks the Privy Council (advisors to Queen Elizabeth I) for permission and funds for an expedition across the top of the Atlantic Ocean (‘the north-west passage’) in an attempt to reach China and India. He says,

‘.. the matters that chiefly moved me to enter prose and avance this new voyage… First is the great hope to fy[nde} our English seas open into the Seas of East India… whereby would also grow to the Realm & [to such] followers therof great Roches and Benefit’.

Permission is granted, and Martin’s three ships are funded and licensed by the Muscovy Company of English merchants who have been exploring the north-east of the UK, towards Scandinavia in the hope of reaching China that way. Queen Elizabeth says she had ‘good liking of their doings’ and waves to the departing ships from a window of Greenwich Palace. 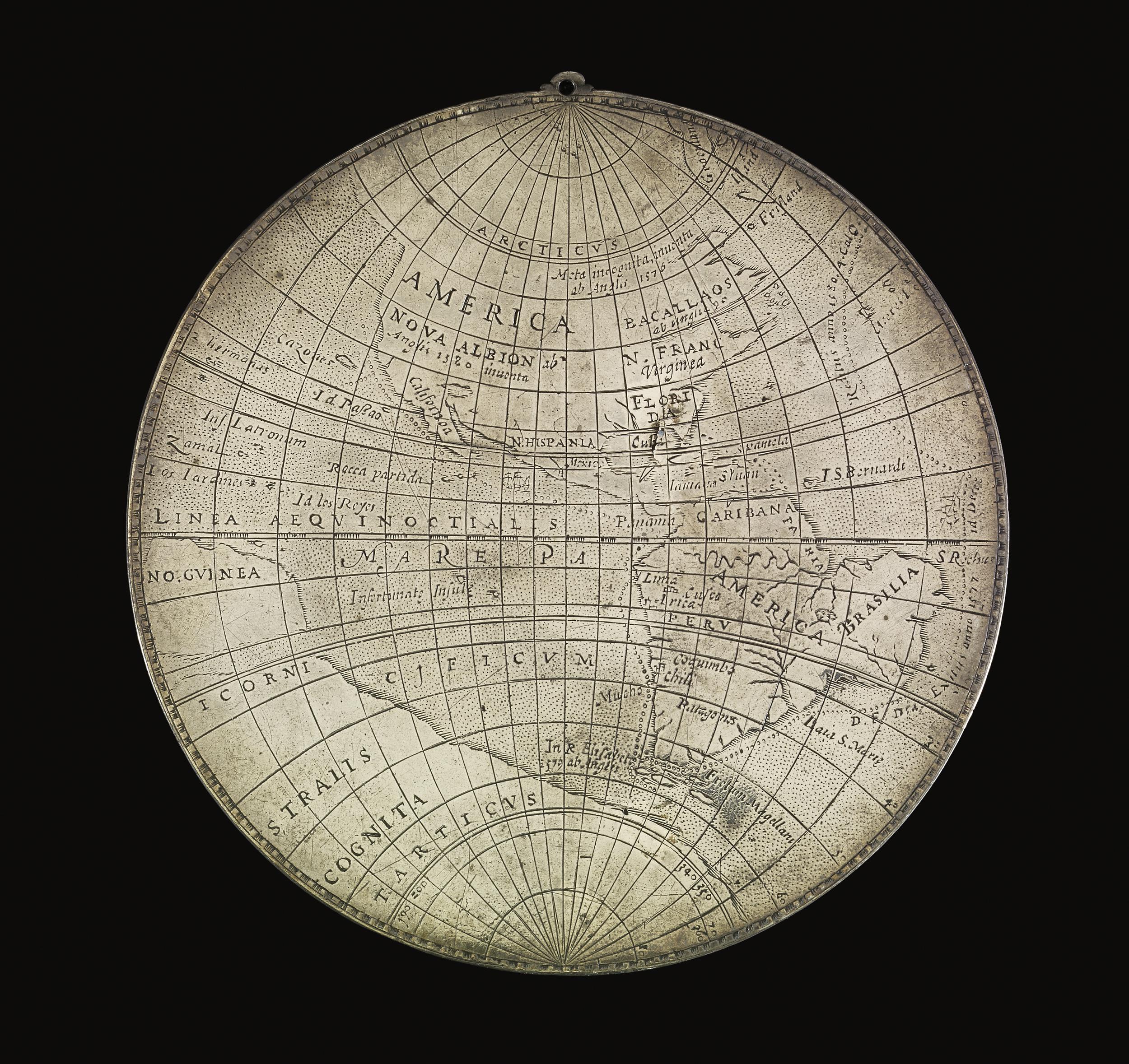 The ships sail through stormy seas, sinking one ship and making another turn for home. The third continues on until they see the southernmost tip of what is now called Baffin Island in Canada. Frobisher names it ‘Queen Elizabeth's Foreland’. They come to a bay, and then to a strait, which Martin calls Frobisher Bay and Frobisher's Strait.

The ship finds its way barred by ice. In trying to find a way through, the expedition meets some local Inuit. 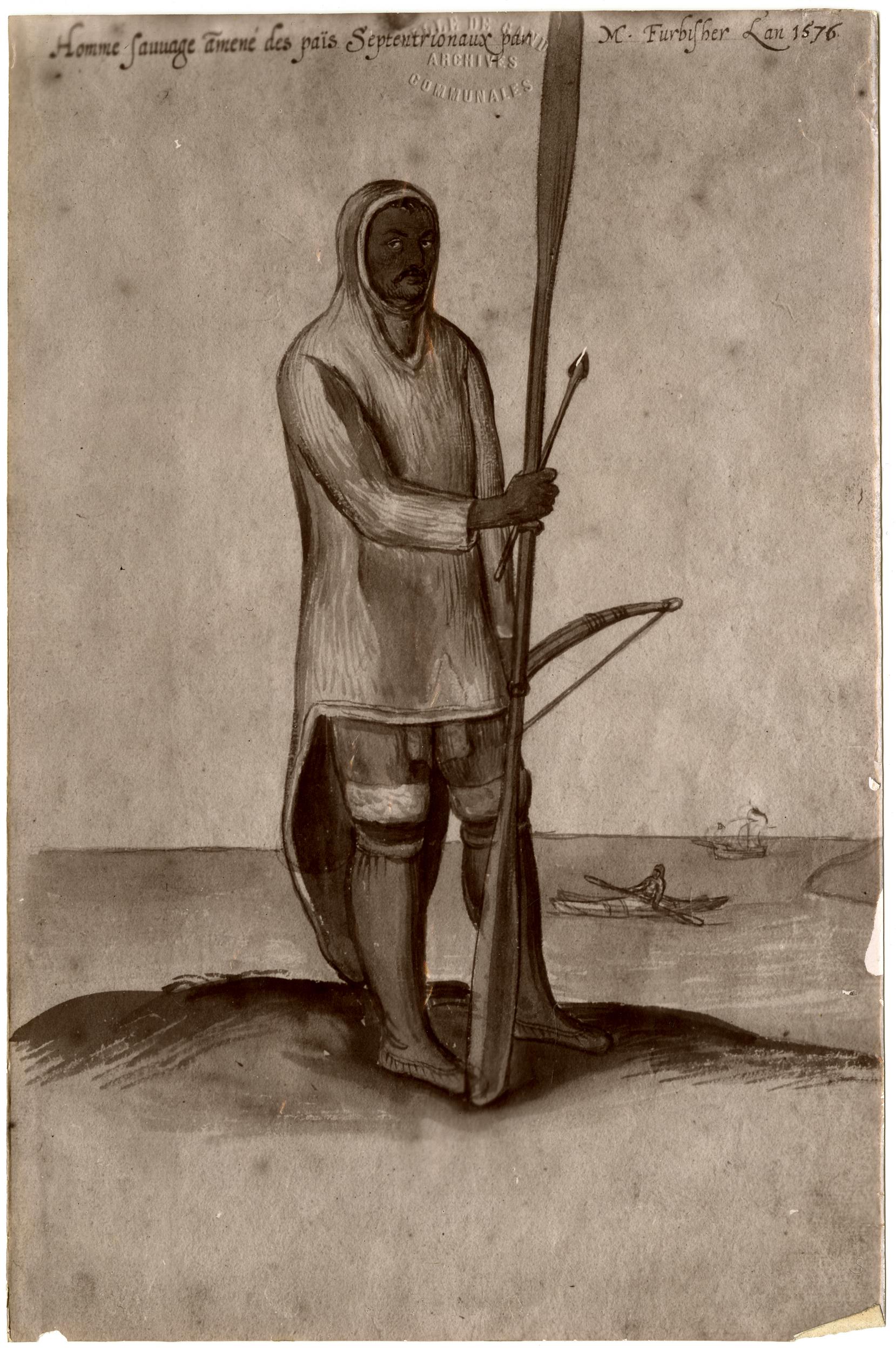 Illustration of an Inuit

It is agreed that one of the Inuit will guide the crew through the ice. The crew split up, and Martin instructs five men back to shore avoiding the Inuit. The men disobey and are captured by the Inuit. Martin searched for the men, but doesn’t find them. He takes the Inuit guide hostage in attempt to make an exchange. It fails and the guide is released. Inuit oral tradition says that the men lived with them of their own free will until they died attempting to leave Baffin Island in a self-made boat.

Before sailing home, Martin takes a black rock as a token of possession of the new land.

Once back in London, Martin takes the rock to his patrons who funded the voyage. They assess it and deem it worthless as it contains no gold. However, one of the Lok family take it to an Italian alchemist living in London, Giovanni Battista Agnello, who believes he finds gold within the rock. Martin says, ‘as many affirme, are signes of great store of Golde…’

There is much excitement and in 1577, a much bigger voyage sets out with the Queen’s own financial support of £1,000 and a Royal Navy vessel.

Frobisher asks the Queen if he can become High Admiral of the North-Western Seas and Governor of All Lands Discovered, and to receive five per cent of profits from trade. We don’t know if she agreed. Among the crew are thirty Cornish miners to dig out the rock. Once the expedition lands on Baffin Island, the crew and the miners begin to collect the ore.

During the time on Baffin Island, there are talks and skirmishes with the Inuits. 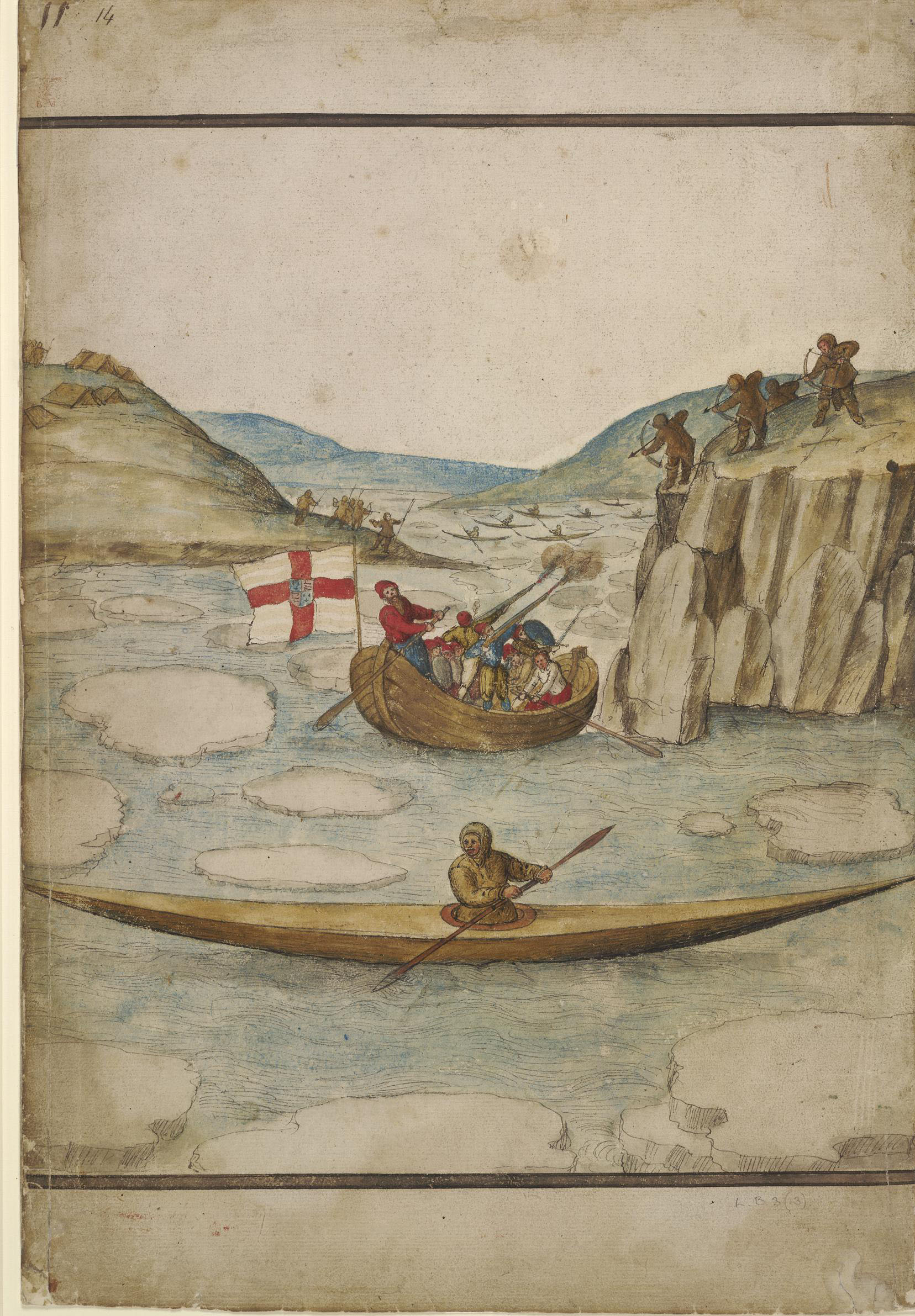 Illustration of 'Skirmish' Between Frobisher's Crew and Inuits

In one skirmish, one Englishman was wounded and five or six Inuit killed, three by drowning after jumping off a cliff to avoid capture after being wounded. The older woman is captured, then released after having her shoes pulled off ‘to see if she were cloven footed’.

Martin forcibly takes three Inuit people from Baffin Island: a man, a woman and a child. 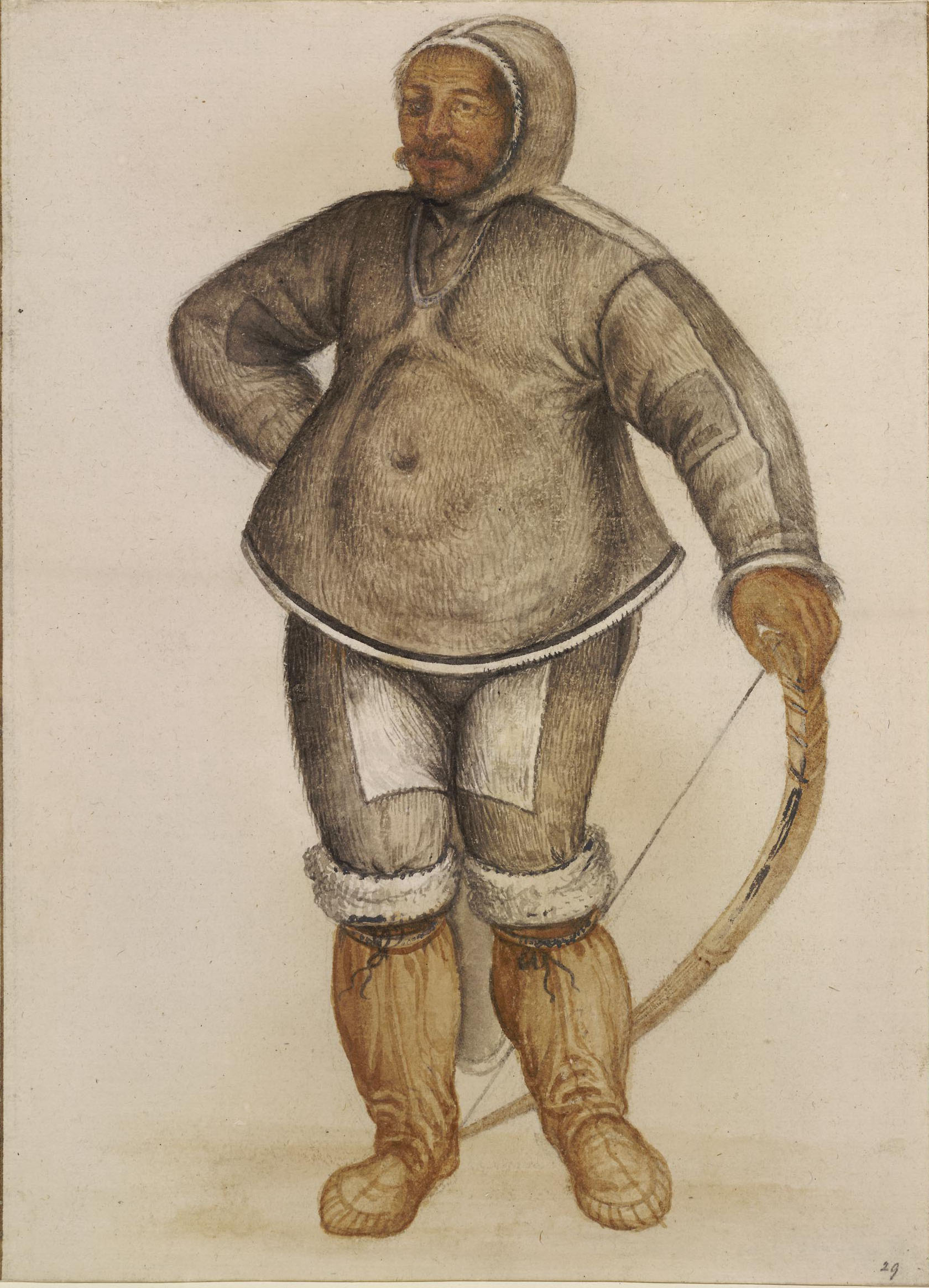 We are uncertain about their names. The English were careful to record what they believed to be their names, but Arnaq probably meant ‘woman’ and Nutaaq ‘child’. The man was Kalicho. A writer at the time, George Best, wrote in 1578, ‘this new prey (which was a sufficient witness of the captain’s far and tedious travel towards the unknown parts of the world, as did well appear by this strange infidel, whose like was never seen, read, nor heard of before, and whose language was neither known nor understood of any)’.

All three Inuit people die soon after reaching England, Kalicho from wounds inflicted in his capture. The young man named William Camden saw Arnaq and Nataaq in London in 1577 and described them later as having ‘black hair, broad faces, flat noses, swarthy coloured, apparelled in sea-calves’ skins, the women painted about the eyes and balls of the cheek with a blue colour like the ancient Britons’.

In 1578, The Queen names the new territory Meta Incognita (Latin for Unknown Shore), and believes it will bring new wealth in the form of gold ore. Martin sets out again for Frobisher Bay. This time with 15 ships and 100 men to establish a colony. There are disagreements, a colony can’t be formed, and all men return to England. Frobisher is credited with starting the Canadian tradition of Thanksgiving as we know it, but there was a First Nations celebration around similar themes at the same time of year too.

Over the next five years, Martin attempts to smelt gold from the ore. However, it did not hold gold, but was instead iron pyrite, or Fool’s Gold. It’s a financial disaster, bankrupting all of Martin’s backers.

The ore is used as hardcore to make roads in London, so are the roads of London really paved with gold? Frobisher needs a new job. In 1585, he joins Francis Drake’s fleet as Vice Admiral on a ship called Primrose. He is part of a fleet raiding Spanish ports and trading with the West Indies. 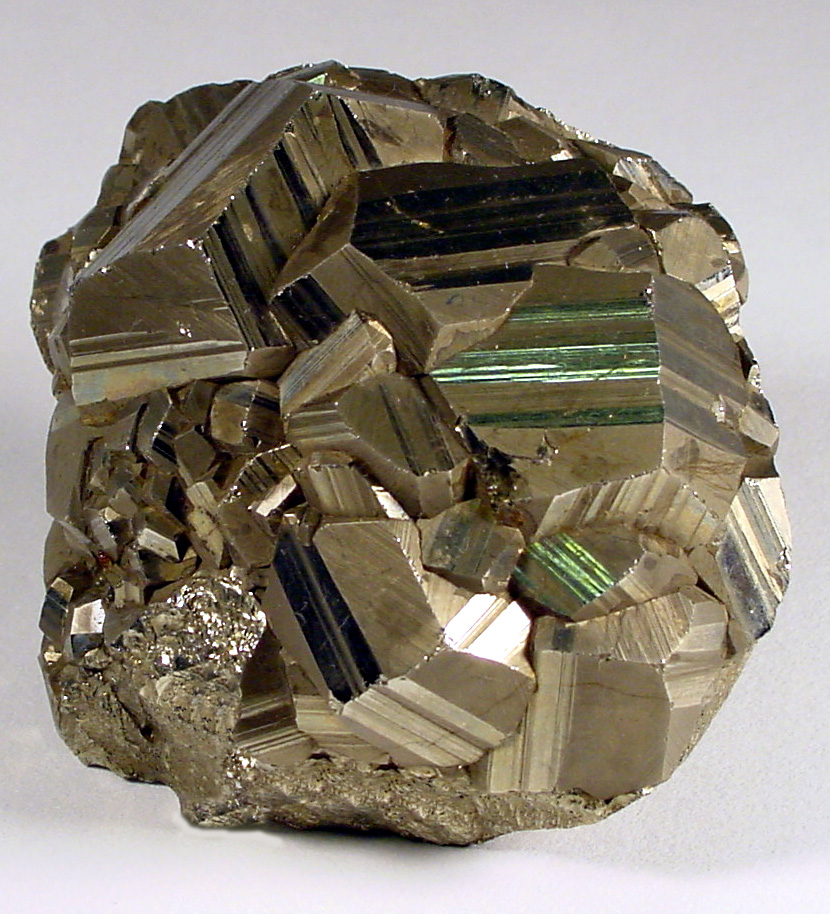 ‘It is greatly to be feared that Frobisher has played us a trick…’, Privy Council member

The Armada: Where’s the Spanish Voice?