‘A Terrier’s Snap’: how a soldier made art from a WW1 army biscuit
View resources Teachers notes Share View related stories
Add to board

During the First World War soldiers were not permanently based in the trenches. They also spent a great deal of time training or in rest areas away from the front line. To pass the time, men created art works, carving, etching and painting souvenirs, which they would often send home to their families and friends. 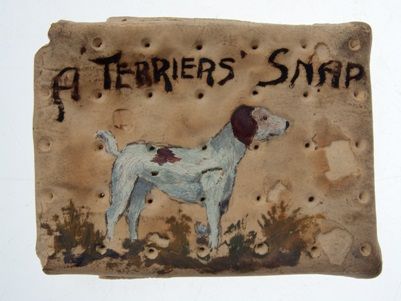 A Painted WW1 Army Ration Biscuit
At some point between 1914 and 1916, while serving in France, Staff Sergeant Charles Shaw of the King’s Own Yorkshire Light Infantry found another use for a tough biscuit from his army rations. He asked a fellow soldier to paint a terrier dog (‘terrier’ was a nickname for a soldier from Yorkshire) on the biscuit, and added the words ‘A Terrier’s Snap’, (‘snap’ being soldiers’ slang word for food). 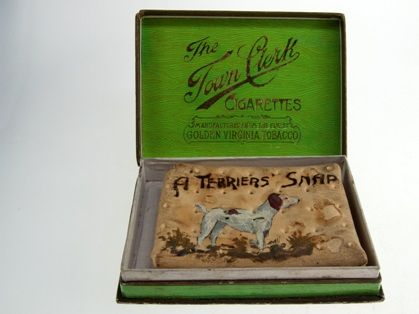 As the military had to organise meals for huge numbers of servicemen, they had to ration food to make sure each man received the same amount. Meal options were limited, but many soldiers ate a better diet than at home, enjoying dishes such as beef tea, mutton broth, potato pie and ‘duff pudding’ (boiled plum pudding).
At the time, the average working man ate around 3,400 calories a day and his meals usually consisted of a small amount of meat with plenty of bread and potatoes to fill him up. A soldier consumed about 4,600 calories and ate a more balanced diet with larger portions of meat, (mainly tinned corned beef), and vegetables.
Soldiers’ families and friends often sent them packages of food, like chocolate, or tins of sardines and sweet biscuits to supplement their rations. However, as the war progressed, the German submarine attacks made it harder for the Merchant Navy to import food and shortages occurred. The British government introduced rationing on the Home Front in 1918, to stave off food shortages. Soldiers’ meat rations were reduced, and later on in the war they only ate meat once every nine days.