Becoming a Pilot in the First World War

Pilots did one of the most dangerous jobs during the First World War. There was a good chance that they would be injured or killed while training, as aviation technology was still very new.
Most trainee pilots had learned to fly before the war and already had some experience, but new recruits were often sent on missions with very little military training. W. Rowland Ding, who worked as a test pilot for the Blackburn Company in Leeds during the First World War, gained his pilot’s licence in just three hours.

Philip Holmes was born in 1889 in Chapeltown, Leeds, where his father worked as a doctor. In 1909, aged 20, he enlisted as a Lieutenant in the 3rd Dorset Regiment, later transferring to the Yorkshire & Lancaster Regiment. At some point before the outbreak of the First World War in August 1914, Philip enlisted in the Royal Naval Air Service, becoming a Flight Sub-Lieutenant. 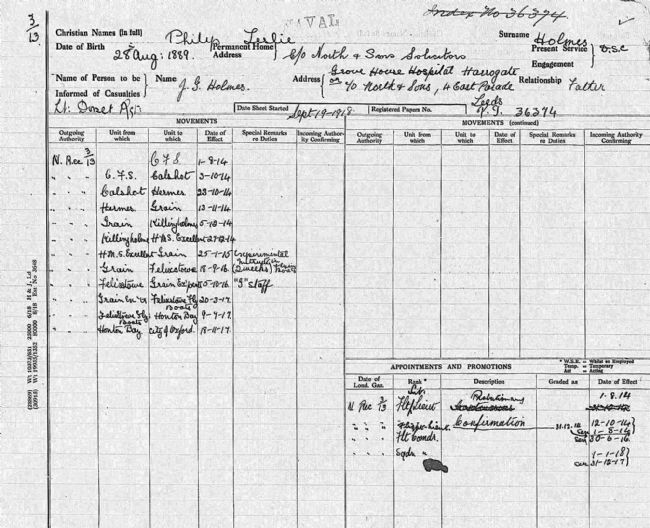 RAF Service Record from WW1
He went to the Central Flying School in Wiltshire, where he learned to fly in an Avro Biplane. This small plane was constructed from wood and although it quickly became too out-of-date for the Front Line, the Avro was often used to train pilots during the war. In September 1914, Philip gained his Aviators’ Certificate and within three months he was promoted to Flight Lieutenant.
Based at a variety of locations from Grain in Kent to Port Said in Egypt, Philip went on to have a successful wartime career, eventually rising to Squadron Commander in 1918. In 1917 he was based on board a ship, the Campania, and he received the Distinguished Service Cross after taking part in a mission during which he bombed an enemy submarine. 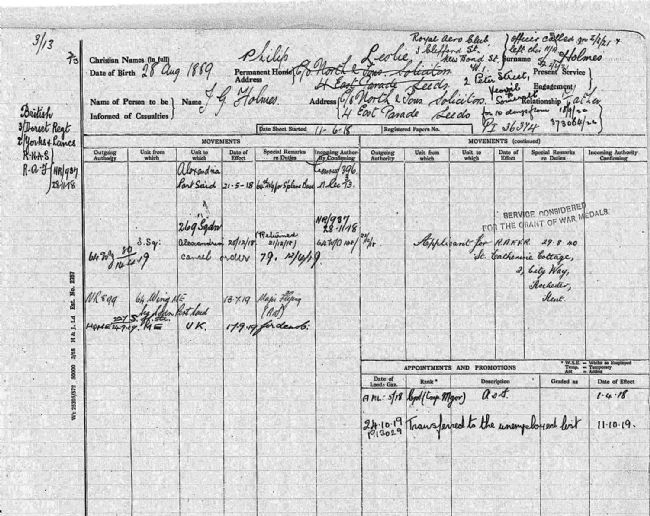 Major Philip Leslie Holmes's Service Record Covering 1918-1919
After the war, he left the newly-formed Royal Air Force, having reached the equivalent army rank of Major. He lived in Kent and Berkshire before he died in 1951.
(With thanks to Thomas Kipling for granting permission for his research on Major Holmes to be reproduced within this resource.)

Aviation – the design, manufacture, use or operation of aircraft
Biplane – a type of aircraft with two sets of wings, one above the other
Career – job or profession, perhaps lifelong
Enlist – to join the armed forces
Equivalent - the same as or very like something else
Flight sub-lieutenant – military rank of pilot
Promoted – to gain a more senior position
Seaplane – a type of aircraft that can take off from and land on water
Squadron – a naval unit
Next section