WW1 Recruitment Propaganda in Hull and the East Riding

Propaganda sources were used in Hull and the East Riding during the first few years of the war, before mass conscription made propaganda unnecessary. They use a variety of techniques to appeal to the emotions and to encourage or pressurise men and women to become involved in the war effort. 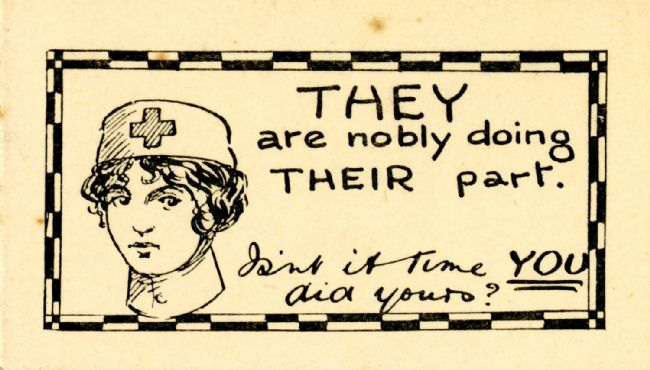 Lord Kitchener, the Secretary of State for War, was responsible for recruiting and training men for the British Army. In August 1914 Britain only had a small professional army by comparison with other European powers and it was clear that many more men would be needed. 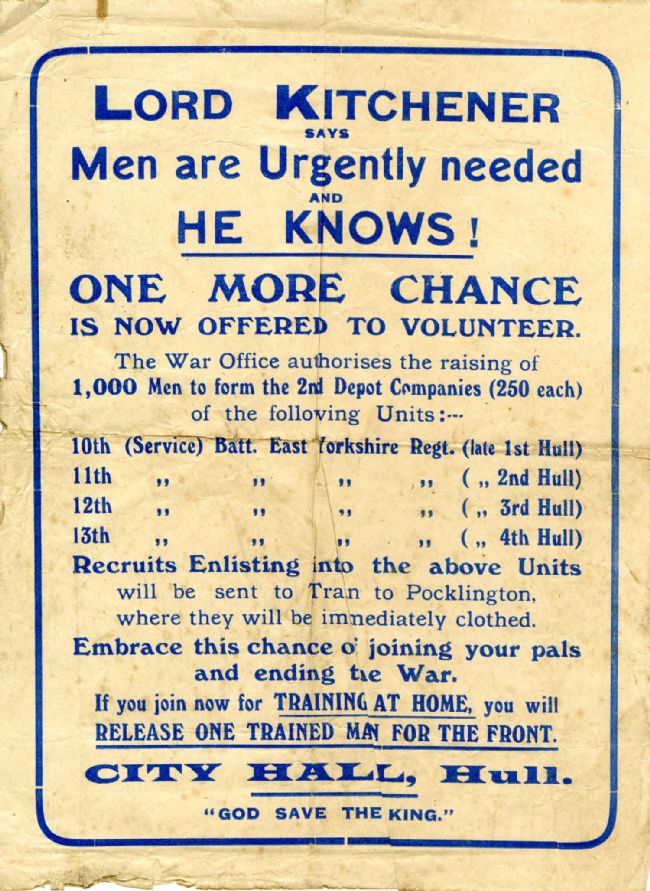 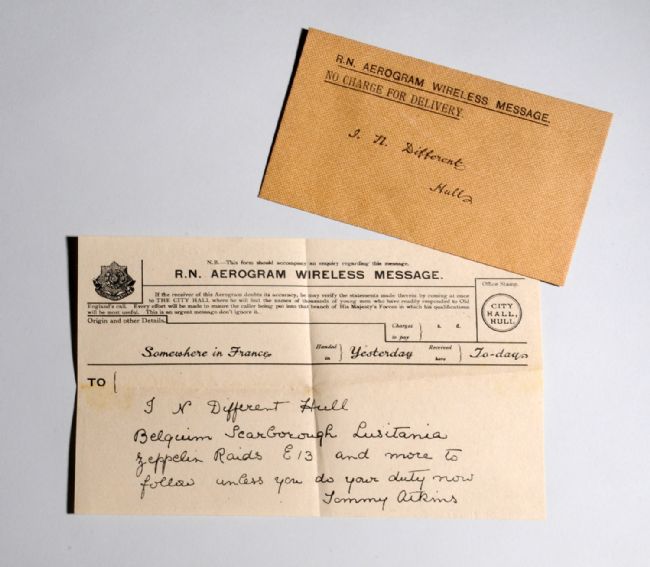 General Henry Rawlinson suggested that men would be more willing to enlist if they could serve with people they already knew. This was successfully tested first in London, then in Liverpool and Derby. The term ‘battalion of pals’ was first used in Derby. Towns and cities across Britain were then encouraged to organise recruitment campaigns asking men to ‘join your pals’ and help to end the war. 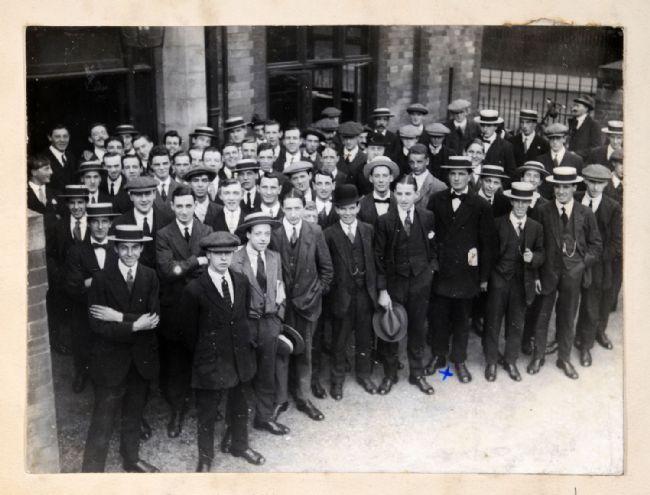 New Recruits to the Hull Commercials 1914

Hull had four ‘pals’ battalions, each with their own nickname reflecting the background or profession of the men who served. The 10th (service) battalion called themselves the Hull Commercials, the 11th were called the Hull Tradesmen, the 12th were the Hull Sportsmen and the 13th were ‘T’others’. The photograph above shows the Hull Commercials outside Walton Street Barracks in August 1914. 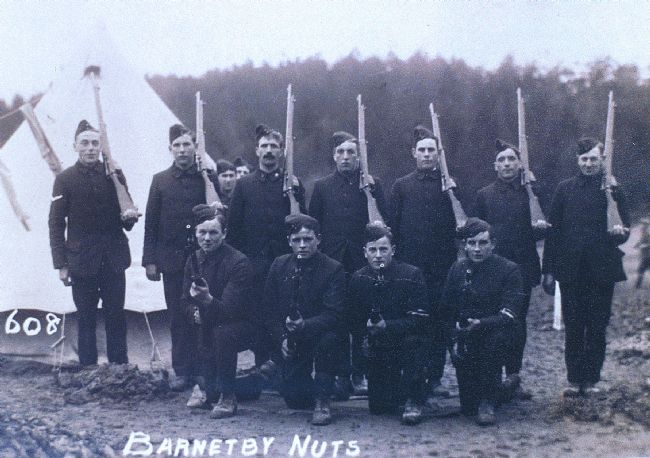 The Lusitania, a British ocean liner, was torpedoed by a German U-boat on 7 May 1915 while travelling from New York to Liverpool. Of the 1,959 passengers on board 1,195 were killed. The sinking provoked public outrage across the world, and helped sway American public opinion in favour of joining the war. 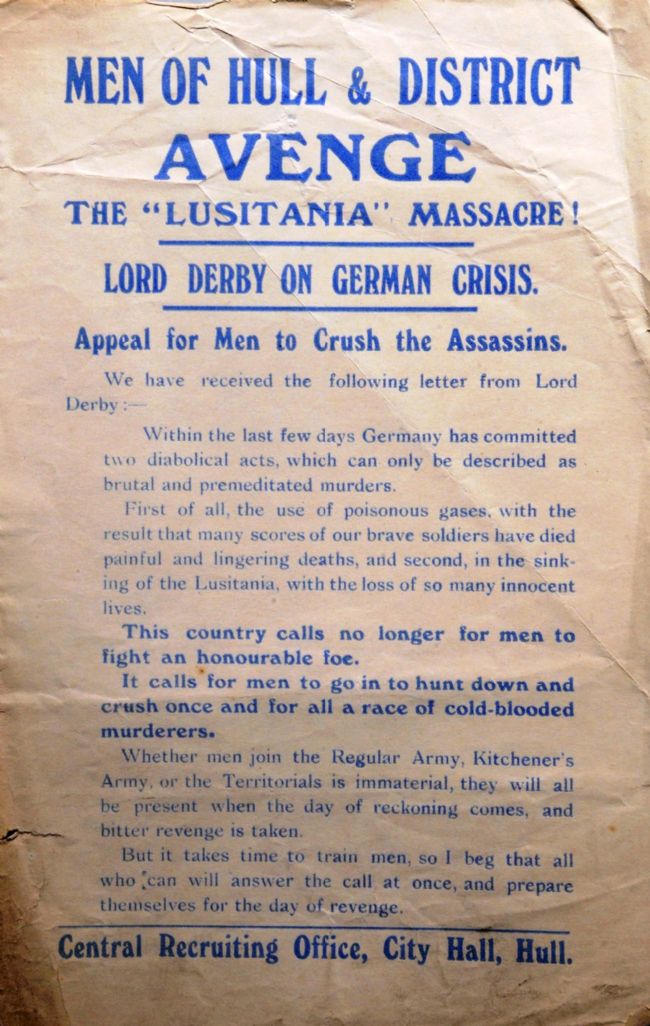 Three months after the Lusitania was sunk, the German navy caused further outrage by sinking the British E13 submarine. The E13 had run aground in Danish territorial waters just outside Copenhagen in August 1915. Denmark was a neutral country, so technically the E13 was on neutral ground. Under the rules of war it had 24 hours to recover itself and depart. However, during that period two German destroyers arrived and torpedoed the E13. Fifteen sailors were killed. The incident caused international outrage. The bodies of the 15 sailors were repatriated to Hull where they were received with full naval honours.

Barracks - separate buildings for housing military servicemen and women
Conscription - when the government introduces a law making it compulsory for certain groups of people to serve in the armed forces
Neutral - not taking sides in a war
Repatriated - sent back to their own country
Territorial waters - a 13 mile wide (approx.) area of the sea around a country's coast-line which belongs to that country