The End of Bertie’s Time at Harewood

Bertie spent nearly 30 years working as a footman for the Lascelles family. We can’t be sure how he felt about his life there, but we do know that the circumstances around his departure from Harewood were not happy. In 1922 Bertie was accused of stealing a £50 note from the Earl (equivalent to about £2,000 in today’s money). At first Bertie denied the accusation but eventually, with the evidence against him, he admitted his guilt. So why after such a long time working at Harewood, and with a reputation for being a good and loyal servant, did Bertie steal from his employers?

Why Bertie Stole the £50

When questioned by the Earl and the police, Bertie finally admitted to stealing the money, although he claimed he found the note lying on the floor, whereas the Earl said it was stored away in a pocket-book in a desk drawer.

Further questioning uncovered the fact that Bertie had a son with Elizabeth Wray, a domestic servant at Ribston Hall in Knaresborough. The Lascelles family has close connections with Ribston Hall and would have visited the incumbent family, the Dents, giving Bertie opportunity to work, and to a certain extent socialize, with the servants from that estate.

Although sex outside marriage was frowned on in society at this time, the reality of human nature combined with a lack of contraception meant that unplanned pregnancies, and pregnancies before marriage were both quite common. Social norms dictated that if a man got a woman ‘into difficulty’ (which was a polite euphemism for ‘pregnant’) then the couple would get married and would be able to live together in the servants’ quarters. In Bertie’s case however, he was Black and the mother of his child was White and there was widespread hostility towards inter-racial marriage in Edwardian England, meaning that this solution was not available to them.

We can see evidence of this racism in letters written by Lady Wenlock, sister of the 5th Earl of Harewood, to another family member just two years after Bertie stole the £50 note. In one letter, Lady Wenlock writes;

'I also read that book you sent me. As you say there is sentimentality that is sweet to the degree [sic] of sickliness. But I found it absorbing. Even the Author apparently convinced of the equality of race can not bring herself to let the mixture happen a second time. I feel very strongly [sic] against any intermarrying of different coloured races. The thought of any Negro intermixture is simply disgusting'.

Extract from a letter written by Lady Wenlock

'Henry had supposed that perhaps he might wish to go back [to the West Indies] someday to have a wife of his own species'.

Describing Bertie as a different species from the (White) people around him is a legacy of the trade in enslaved Africans and the dehumanizing propaganda and scientific racism deployed by those involved in the trade. After Emancipation, scientific racism continued, using pseudo-science to argue that some humans were better than others (in this case, to argue that White people were superior to Black people). Racism therefore likely prevented Bertie and Elizabeth from marrying, leaving both of them in a very difficult position.

Bertie’s response to his predicament was to steal the £50 note from the Earl. We do not know exactly what he planned to do with the money, but the fact that he was now a father seems to be what prompted the theft. Bertie wanted to support Elizabeth and his son, but he could not afford to do so. This may be because he was also responsible for sending money back to his family in St. Vincent.

The Evidence for Bertie’s Guilt

Outside of his confession, we know that Bertie was guilty of the theft, because after taking the £50 note, he changed it for smaller denominations at a nearby pub (the Lascelles family was staying at their London residence at the time). The pub owner was suspicious that a Black man would have access to such a large sum of money and raised the alarm by contacting the local police. The £50 note, which would have been rare at the time, was returned to the Bank of England.

The Earl did not contact the police until two months after the theft – believing the money to be lost rather than stolen. Once alerted, the police connected the two events. We have the 5th Earl’s diary account of what happened: 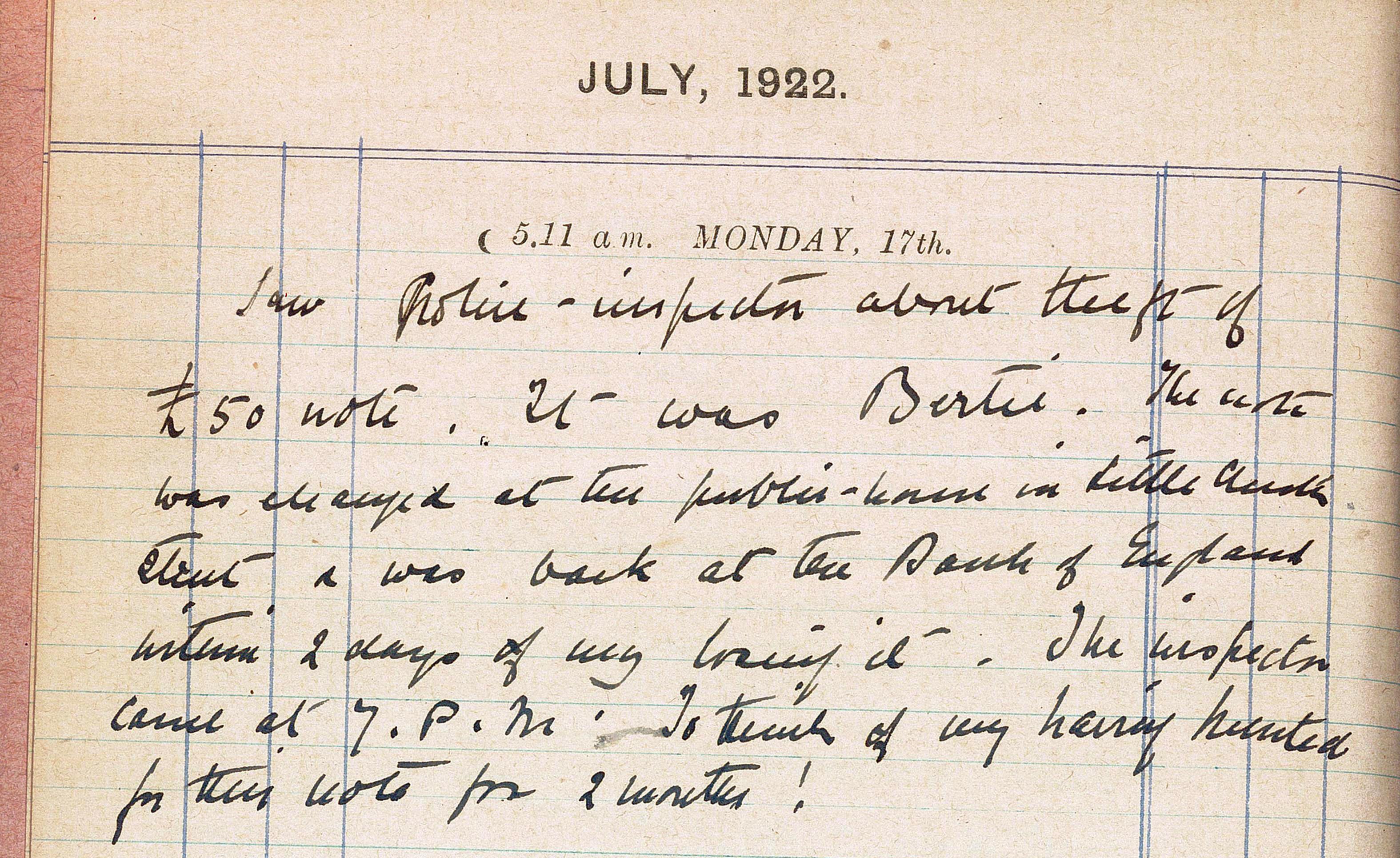 The next day the police came to the house to confront Bertie. The Earl wrote in his diary about how Bertie first denied and then admitted the theft, giving the reason of wanting to support his son (full transcript available in Downloads). 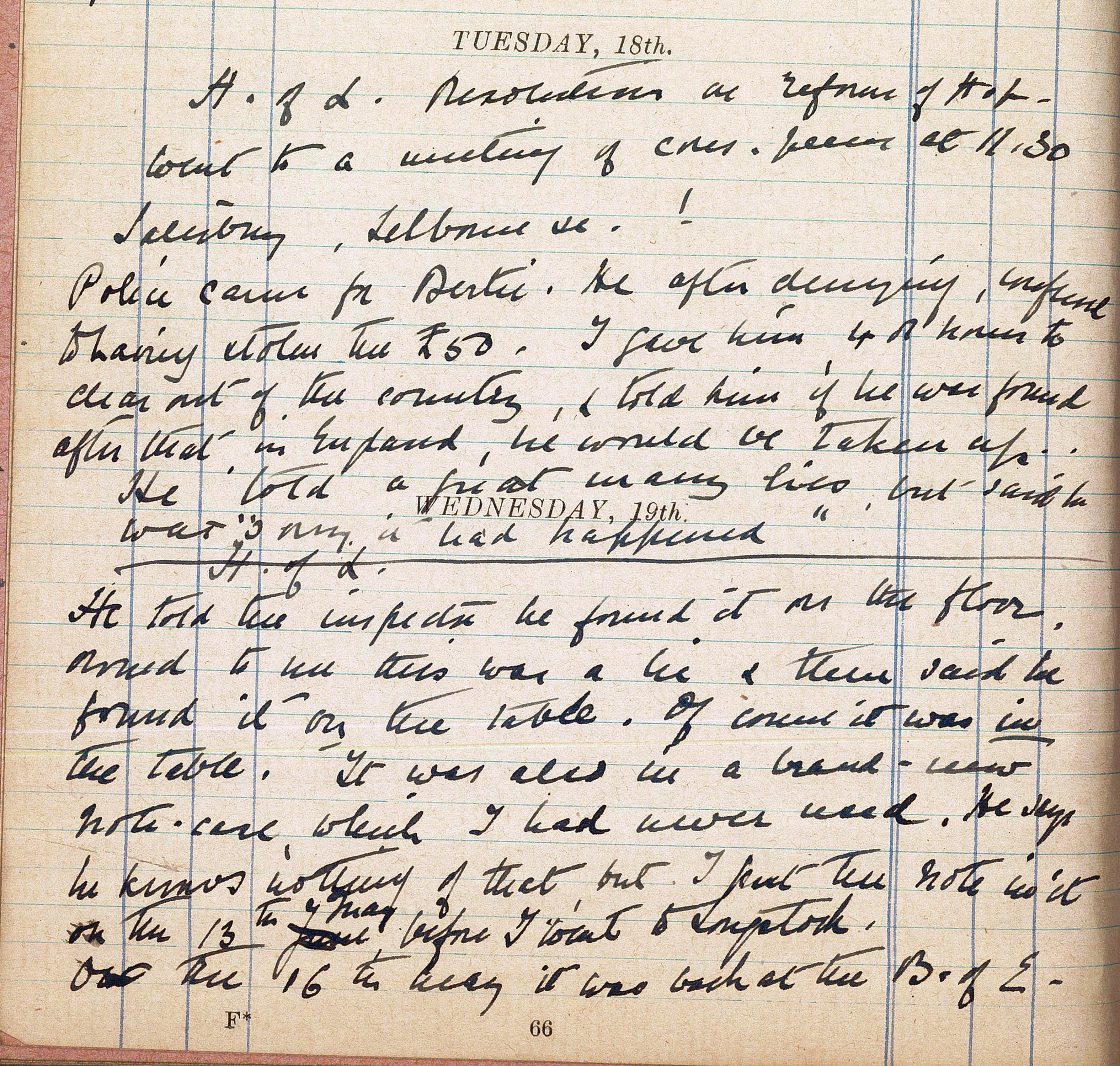 Regardless of Bertie’s motives, the Earl was then faced with a decision. Did he turn a blind eye to the theft in recognition of Bertie’s long years of loyal service, or did he have him arrested? The Earl chose a third way, giving Bertie 48 hours to leave the country. The last we hear of Bertie is that he left on a ship from Southampton bound for Trinidad less than two weeks later. Nothing more is known about his life.

Once again we are missing Bertie’s own account of his actions, how he felt about what he had done, and the consequences he suffered. We have no record of whether he was able to say goodbye to Elizabeth or his son, or how he felt about having to leave them behind. We can presume that he cared about them, as he was trying to provide for them financially.

In losing his job with the Lascelles family and being forced out of England, Bertie would no longer have been able to help financially support his family in St. Vincent.