The skills, service and history of being a Girl Guide
View resources Teachers notes Share View related stories
Add to board
Previous section
Active Service by the Girl Guides in WW2

Service by Royalty with the Girl Guides

When Princess Mary died in 1965 her place was taken by Princess Margaret who was a very active President until her death in 2003. A year later the Countess of Wessex took over; she too takes a great interest in guiding and has been an active leader in a local unit, as well as attending guiding events in her role as President. 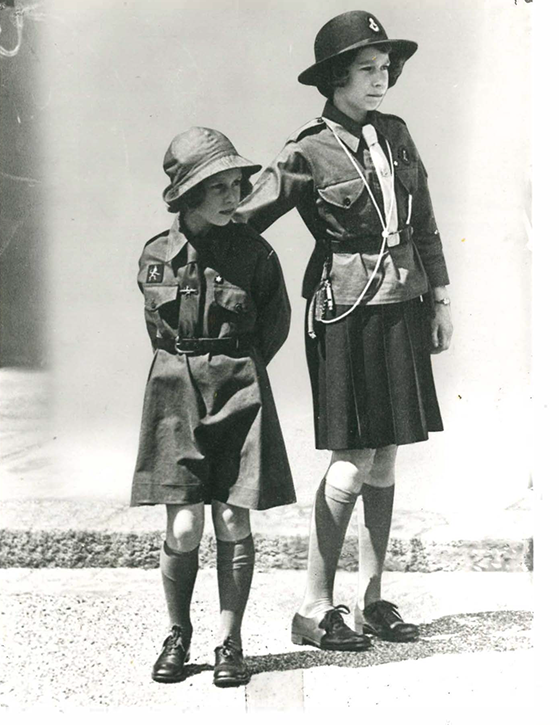 Princesses Elizabeth and Margaret in their Girl Guide Uniforms

Two Guide companies have an actual royal connection, the 1st Sandringham or Princess Mary’s Own and the 1st Buckingham Palace Brownie Pack and Guide Company.

Queen Mary asked the Princess Royal to organise a company for Sandringham which was opened in 1920. Both attended the inaugural meeting and two Patrols were formed, the Carnation and the Rose. The Company is still active today and in spite of having to close for some periods it is now celebrating its centenary. Each Christmas from 1930 until 1951 the Princess Royal gave books to the company; there were 58 presented in total. 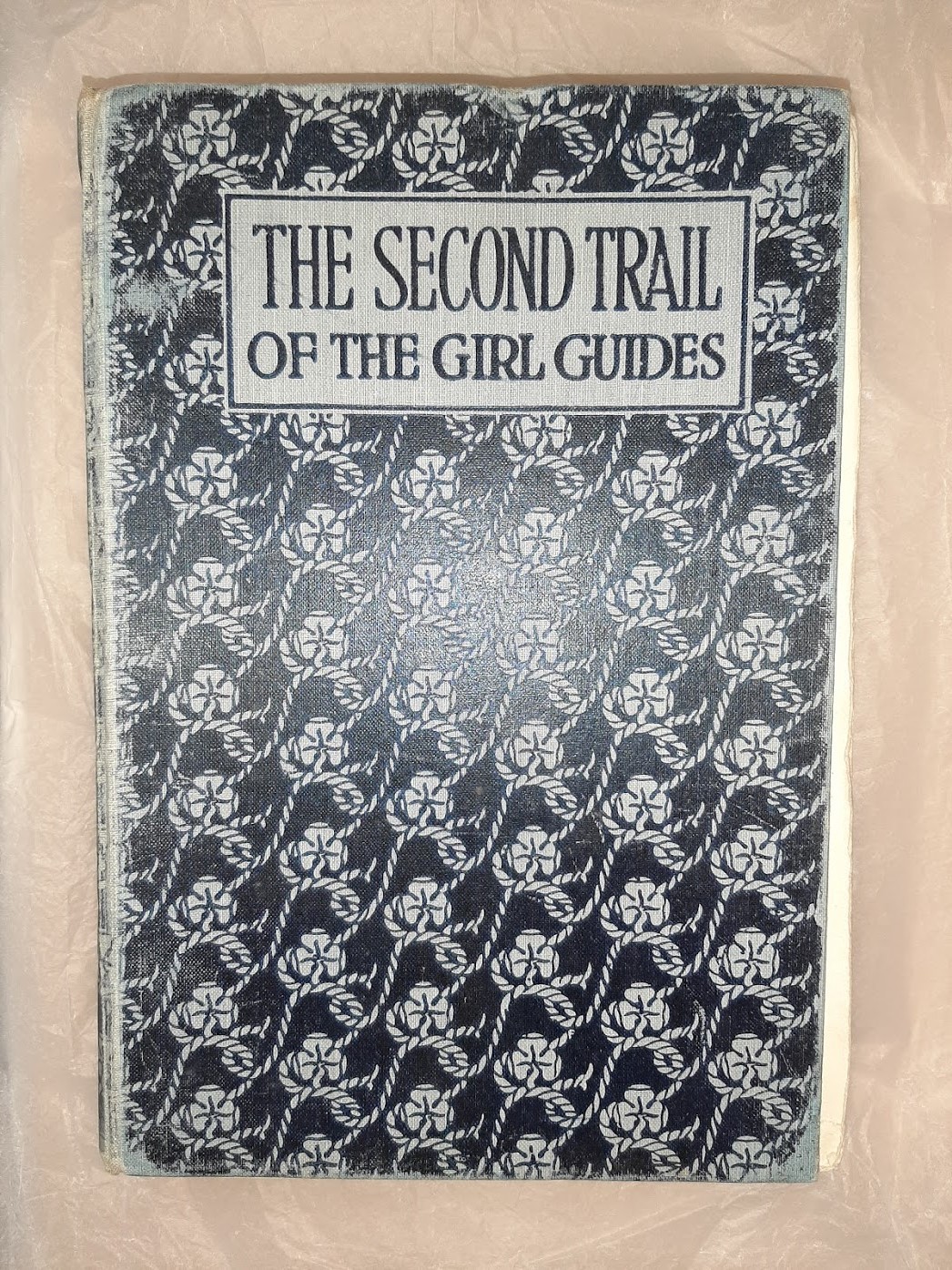 The Second Trail of the Girl Guides

The company was visited by the Princesses Elizabeth and Margaret when they were at Sandringham and again later by Elizabeth when she was Queen. These visits were recorded in the Company logbooks. 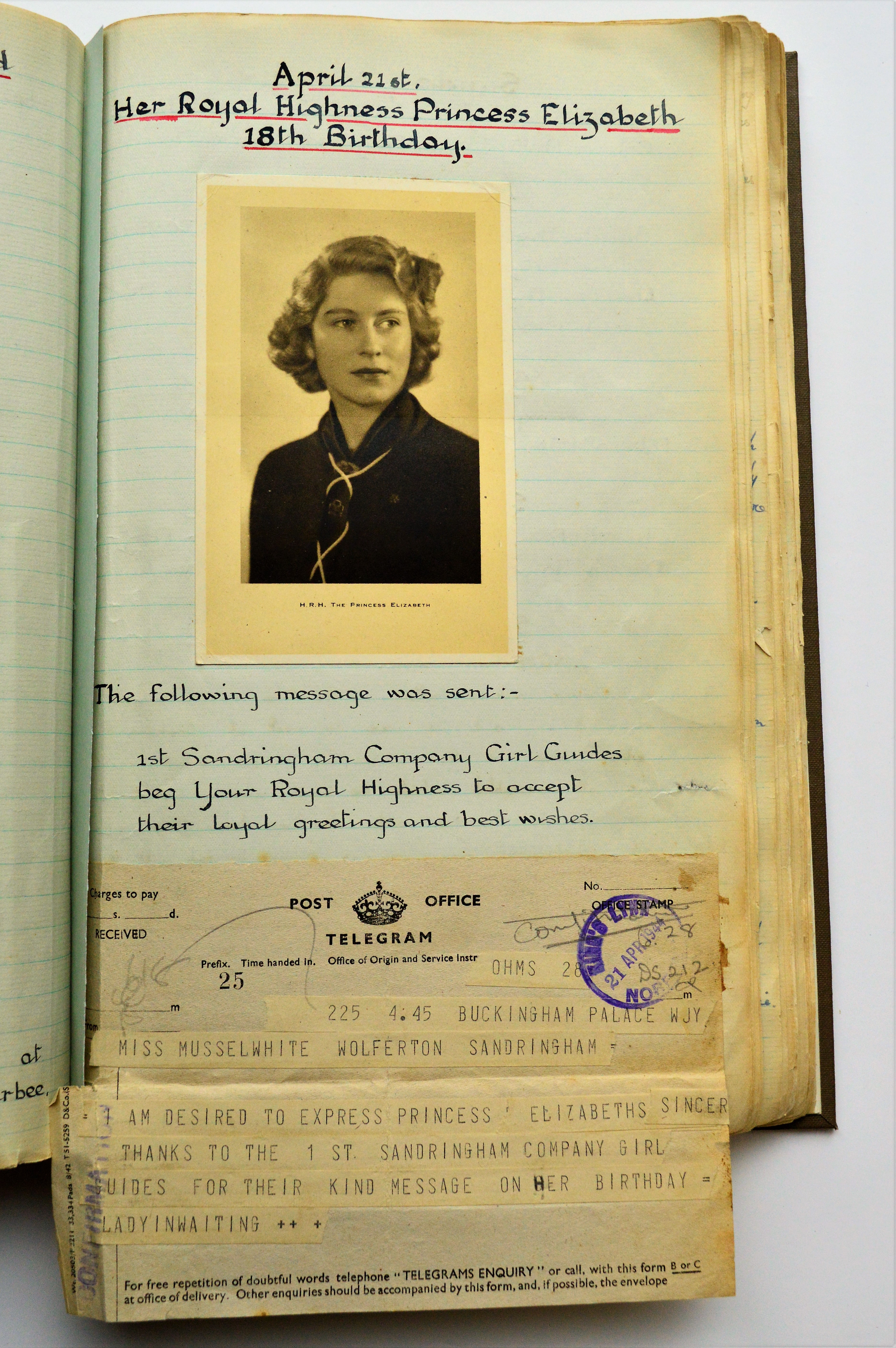 In 2018 during the Heritage Open Days weekend two precious logbooks were given for the care of Girlguiding Norfolk County’s Archive Resource Centre (ARC) and are now cherished and shown to a wider audience. Later sixty of the Christmas books were also given to the ARC. 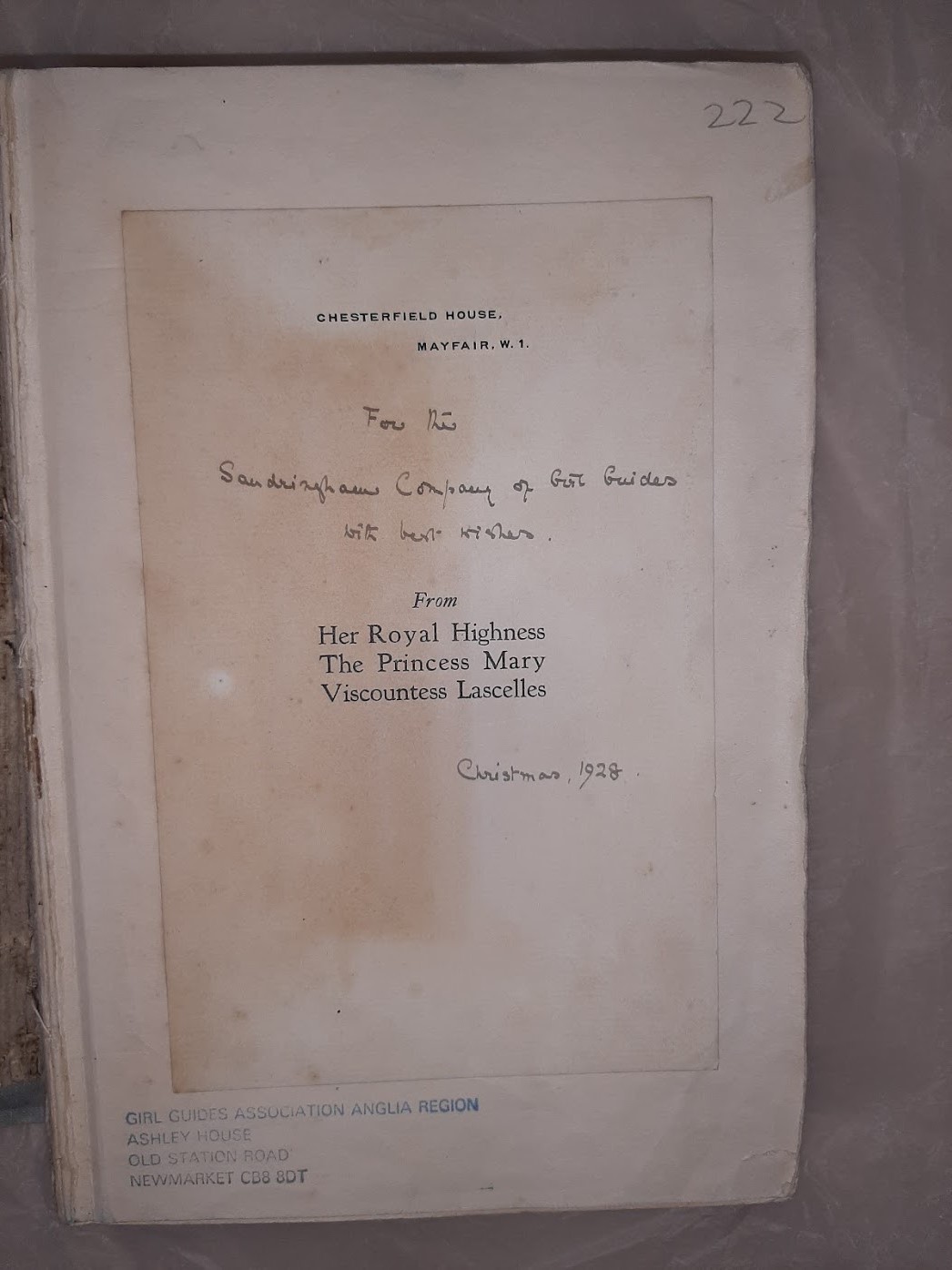 Book Given to Sandringham Company of Girl Guides 1928

The 1st Buckingham Palace company was set up in June 1937 so that the two princesses could mix with other children and enjoy doing ‘normal’ children’s activities. This was in part because the Princesses had not been to school with other children, and once it was realised Princess Elizabeth would become Queen, it was important she had had contact with children beyond the Palace. The other members of the company were mostly cousins and children of some of the estate workers.

At first the children were not sure how to behave and were rather subdued and quite unsuitably dressed. As Princess Elizabeth exclaimed, “They can’t roll around and get dirty in those dresses.”

Later things improved and the Guides acted like any other company. Princess Elizabeth later became Patrol Leader of the Swallows and once a Guide,  Princess Margaret eventually became leader of the Bullfinches. Both girls did all the things Guides did including completing badges and camping, although they were not always allowed to sleep under canvas because of the danger from German bombs. There are many photos showing the girls practising first aid and camping skills including cooking, hiking, hut-building, gadget-making and washing dishes.

The girls both made their Promises, as follows:
I promise on my honour to do my best-
To do my duty to God and the King.
To help other people at all times.
To obey the Guide Law.

In 1943 Princess Elizabeth joined the Sea Rangers and was followed by her sister in 1946. The same year both girls spent four days aboard the training ship MTB 630 sharing all tasks, peeling potatoes and scrubbing decks, with the rest of the crew.

In 1944 Princess Elizabeth was a very popular visitor at the national Sea Scout Exhibition. She obviously enjoyed her visit, and correspondence was received afterwards from her Lady-in-Waiting to say

"Princess Elizabeth asks me to write to you at once to tell you and all concerned how very much Her Royal Highness enjoyed this afternoon and how greatly impressed she was by the really wonderful Exhibition over which she was so kindly shown. As the daughter and granddaughter of sailor Kings, the Exhibition appealed to Princess Elizabeth tremendously and Her Royal Highness was deeply touched by the welcome which she received." 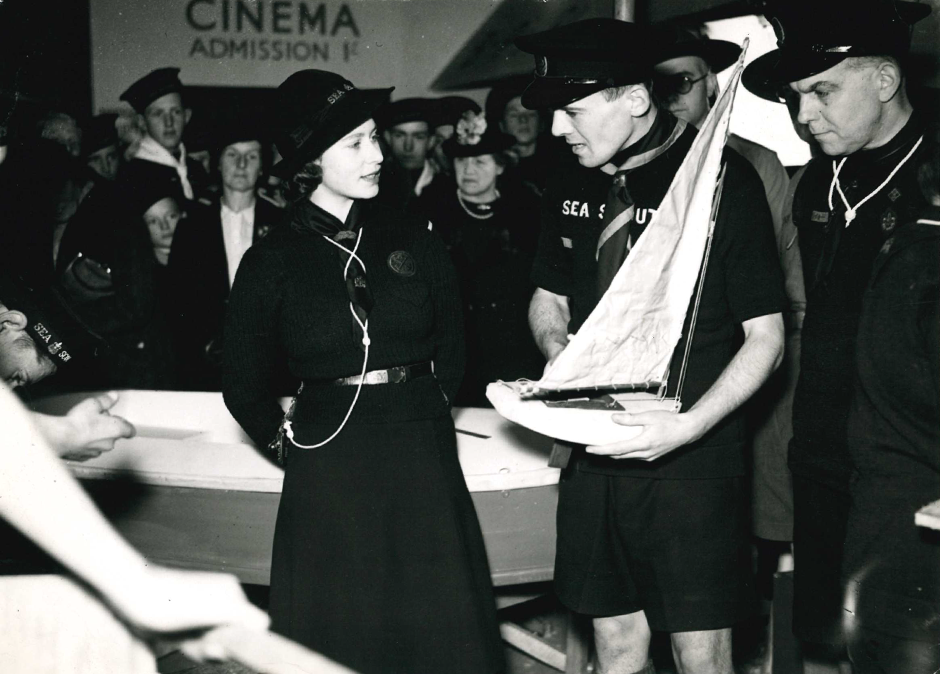 At Princess Elizabeth’s wedding many Guides were lucky enough to participate in some way. Two were bridesmaids, some attended the ceremony in the Abbey and others were on the forecourt of Buckingham Palace. Later at the Queen’s Coronation Guides from the Commonwealth were at the ceremony. 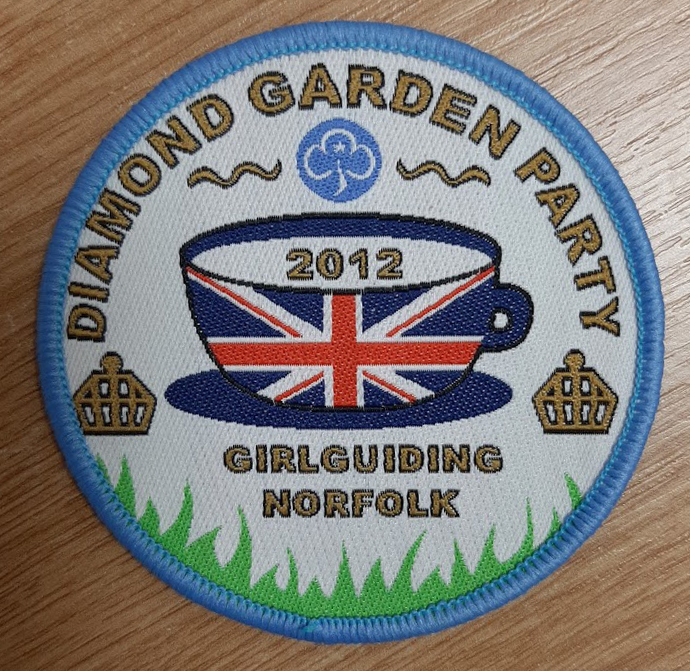 Even now as Queen she still continues her interest in the Movement and Guiding always produce badges to celebrate royal occasions. 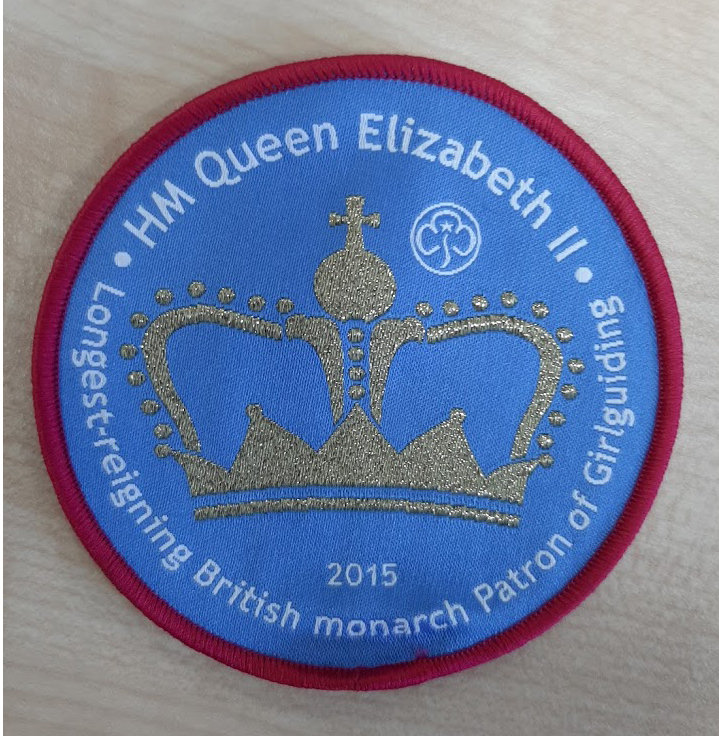 How an ordinary girl became friendly with Royalty

Maureen Siddle’s family lived in the Great Park at Windsor which in the 1930s was a nice safe and secure place to live. The King and Queen often stayed in the Royal Lodge and Princess Margaret’s nanny often took her for walks in the park. It was not unusual for them to meet up with Maureen and the two girls, as they were the same age, would share and play with Maureen’s dolls and toys.

When it was decided to start a Guide and Brownie company Maureen was one of the girls lucky enough to be asked to join and she and Margaret became Brownies together. Every week Maureen was collected by soldiers from Windsor Barracks and driven in a horse-drawn carriage the three or four miles to the Castle where the meetings were held. Later, in the Guides, Maureen was in Princess Elizabeth’s patrol and became Patrol Leader when the Princess joined Rangers. Maureen could never understand why she had been chosen but she had spent quite a lot of the time with Elizabeth appearing in three pantomimes and the concerts which were frequently performed by the Royal sisters. She also spent many happy days camping with her future Queen.

Maureen realised that she had to be discreet about her time with members of the Royal family and it is only since she has died that her private papers have been donated to the ARC.

Gadget – camp ‘furniture’ made with sticks and tied together with knots and lashings to make living in camp more comfortable.

Guide Company – a group of girls, in groups called Patrols, who work together with leaders on a programme of activities designed for the age group to support young women to grow in mind, body and spirit.

The Movement / The Girl Guides – Association formed for girls in 1909/10 as a result of girls going to a Boy Scout rally and asking for something for the girls. An international movement with 10 million members in approximately 150 countries.

Patrol Leader – leader of a small group of between 4-8 girls called a Patrol.

Patron – a person (often well known) who supports an organisation.

Sea Rangers – the section for older girls which was one of three including Air, Land and Sea which usually focussed on activities appropriate to these themes.

Skit – a mini play, often performed at a campfire, to entertain.

Wide Game – an outdoor game taking place over a wide area, often with a theme and a range of challenges and activities to undertake.

Followers of Fashion: the Brownie Uniform, Promise and Promise Badge