One long-term Leeds resident Kate, reminisces about growing up in the 1980s:

"I was born in 1981 in Birmingham. When I was nearly one, we moved down to Southend-on-Sea in Essex, following my Dad’s job. He worked in marketing and advertising and my Mum was a teacher. In 1987, we moved back to the midlands. I remember moving schools when I’d just turned 6, and thinking consciously about starting new friendships.

What toys everyone had (or wanted) was a good starting topic of conversation for making friends. 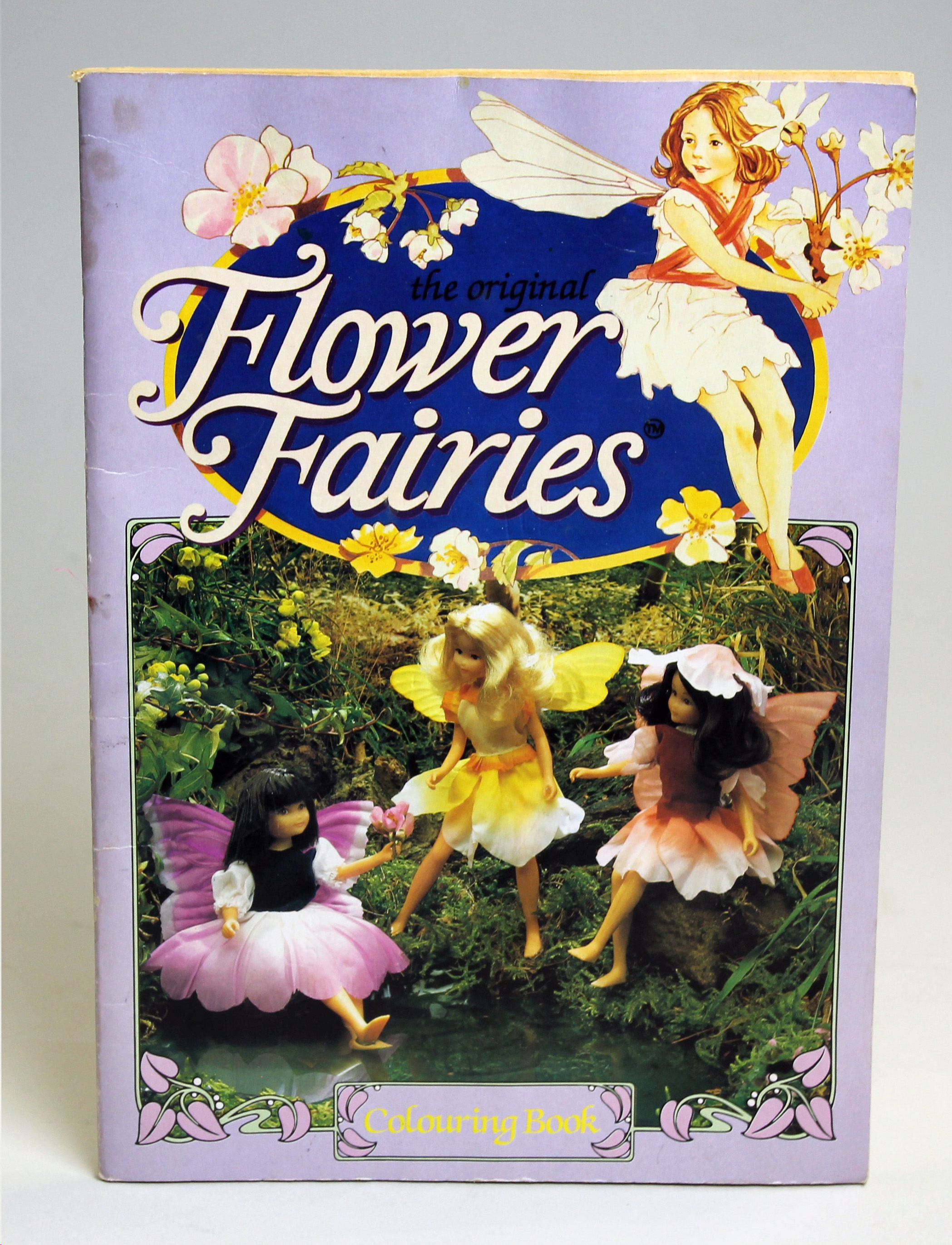 Dad would often go to trade shows and be away for a few nights at the time. When he got back, often just around my bedtime, he would magically produce a new toy from behind my ear with a flourish! It was usually a new, shiny Matchbox toy car, a She-Ra figure or a My Little Pony. It wasn’t until I was a grown up that my Mum pointed out that Dad never had time to find a toy shop whilst he was away, and that she had a stash of toys, one of which she would slip into his hand when they hugged to magically be produced moment later! I loved She-Ra, My Little Pony, Rainbow Brite, Flower Fairies, Care Bears, my Popple and my toy car garage. 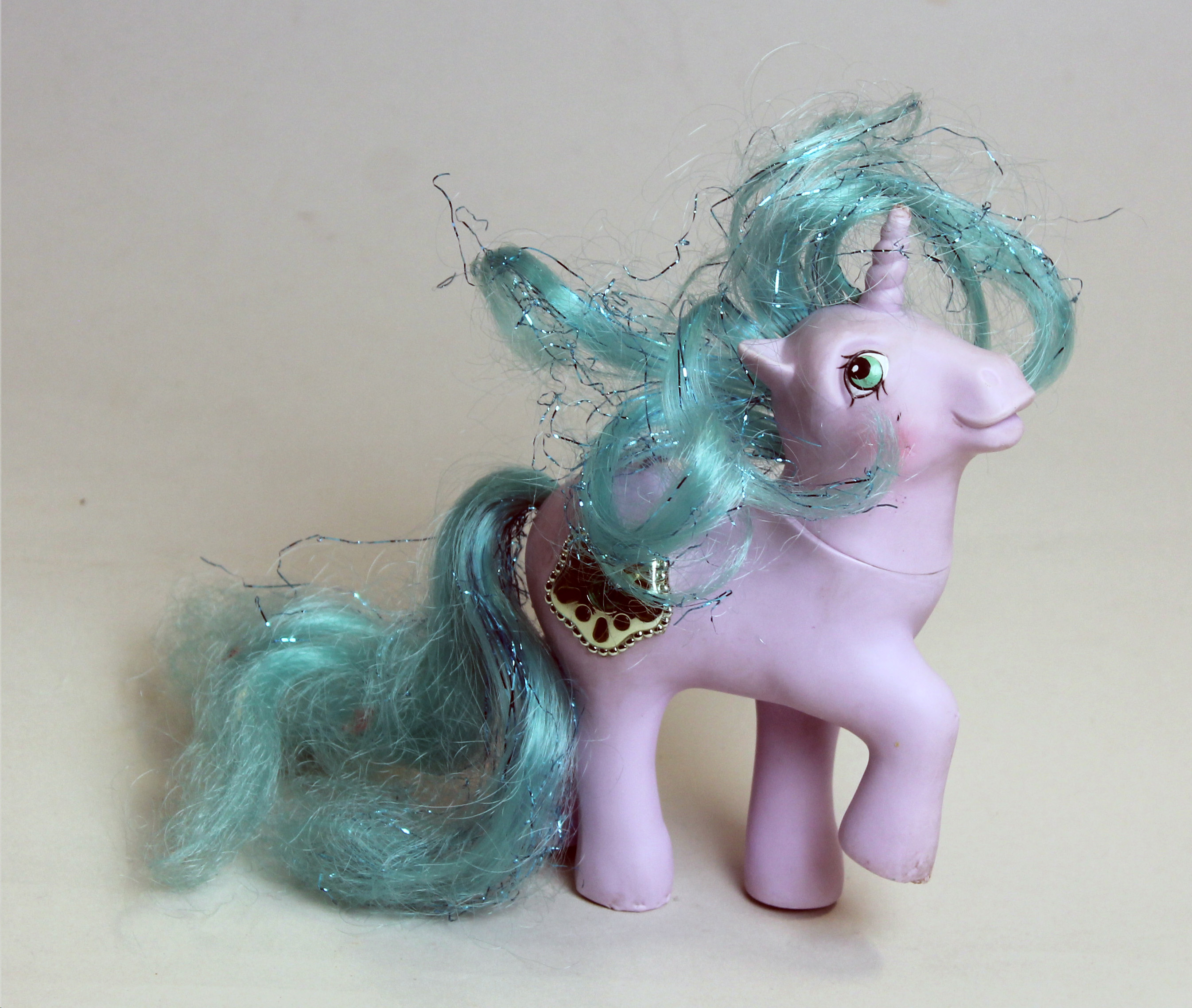 My Little Pony unicorn toy from the 1980s

The ‘must have’ toy one Christmas was a Rainbow Brite doll and her unicorn with a multi-coloured mane. They were quite expensive, and Mum and Dad couldn’t really afford it, so Mum made me one from a pattern in a magazine. I hugged them so much they fell apart and went into the rags when I moved out of home. 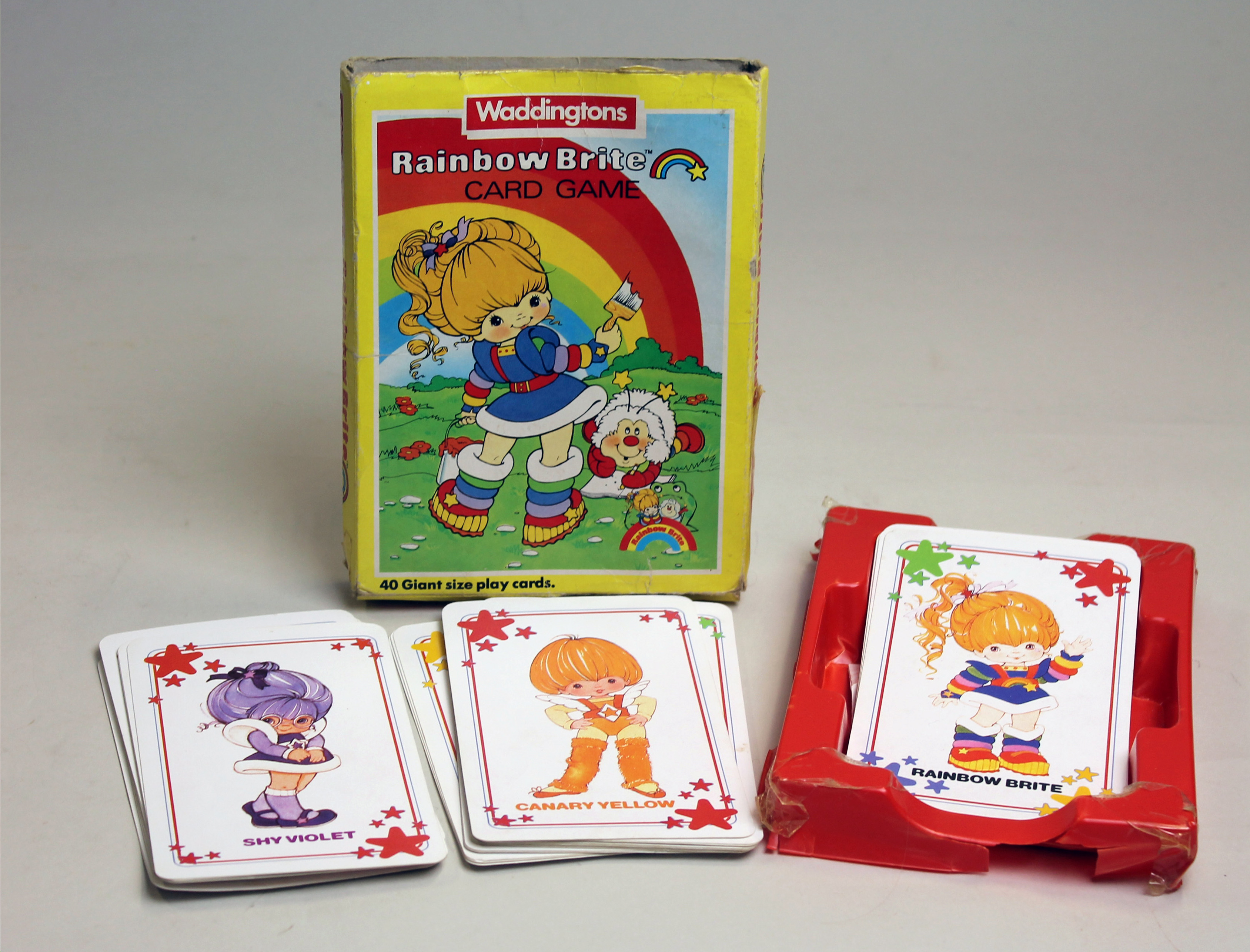 I loved She-Ra. I watched the cartons, read the books, and asked for all the toys for birthday and Christmas. 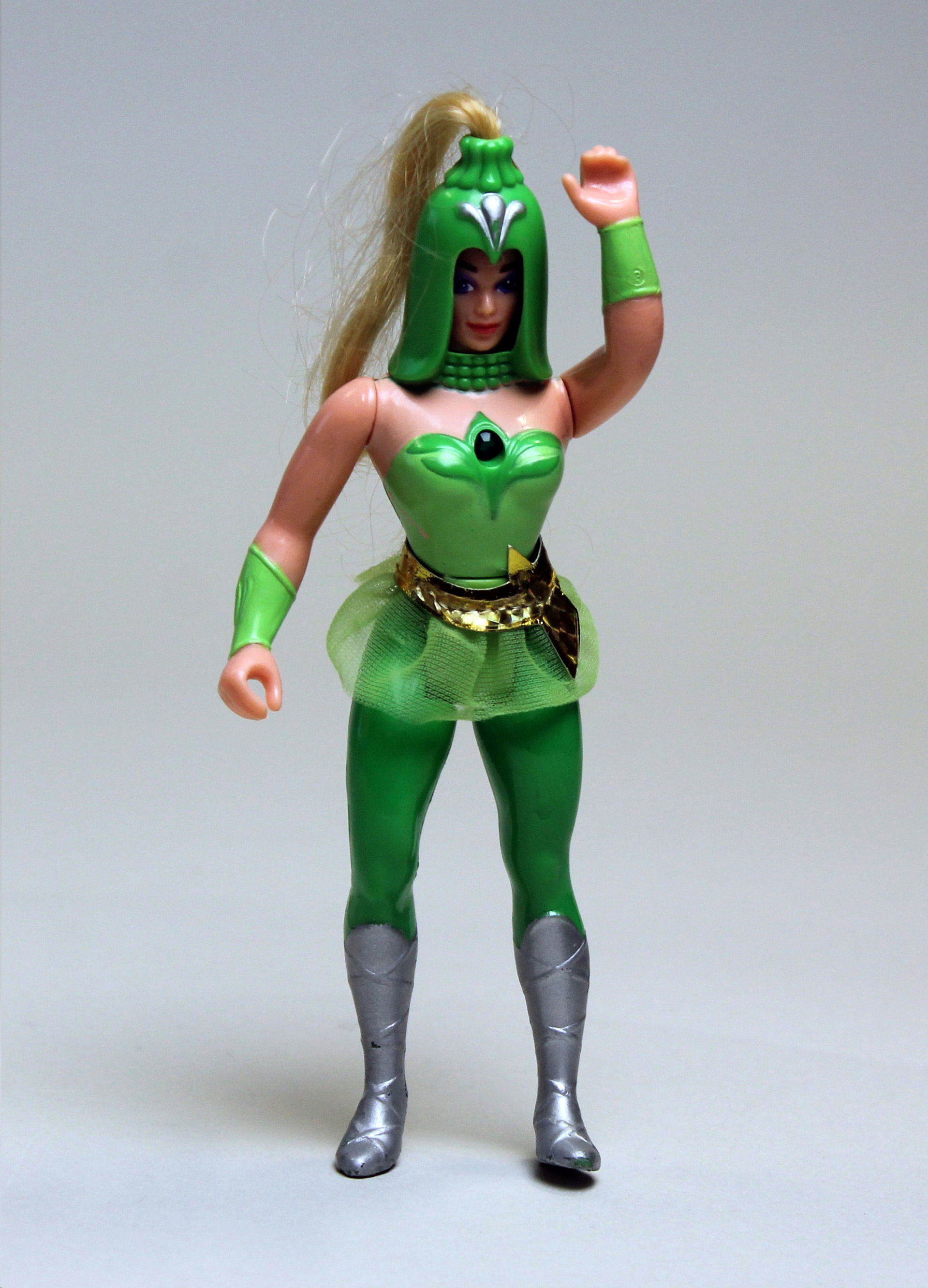 I remember thinking it was good to have a strong female in the leading role. It made sense to me. My Mum and my Gran (Mum’s mum) were both very strong, determined women.

However, looking back with hindsight and the view of 2021, whilst She-Ra was a good start, there are more feminist aspects things missing from the storylines. Each of the She-Ra figures came with a little paper storybook – one side was English, the other French. I really enjoyed flicking between each story and seeing what words I could recognize on the French side. One of Dad’s ‘getting back home’ presents was a Catra figure with a grrr-ing, clicking arm. At the time, it was the most brilliant thing in the whole world.

I didn’t just play with toys though. When we moved to the midlands when I was six, we had a big garden. The house had belonged to a builder previously, so there were loads of random bricks and planks at the bottom of the garden and I issued to make lots of rocking bridges and balance beams. Lots of grazed knees, twisted ankles and squashed fingers!" 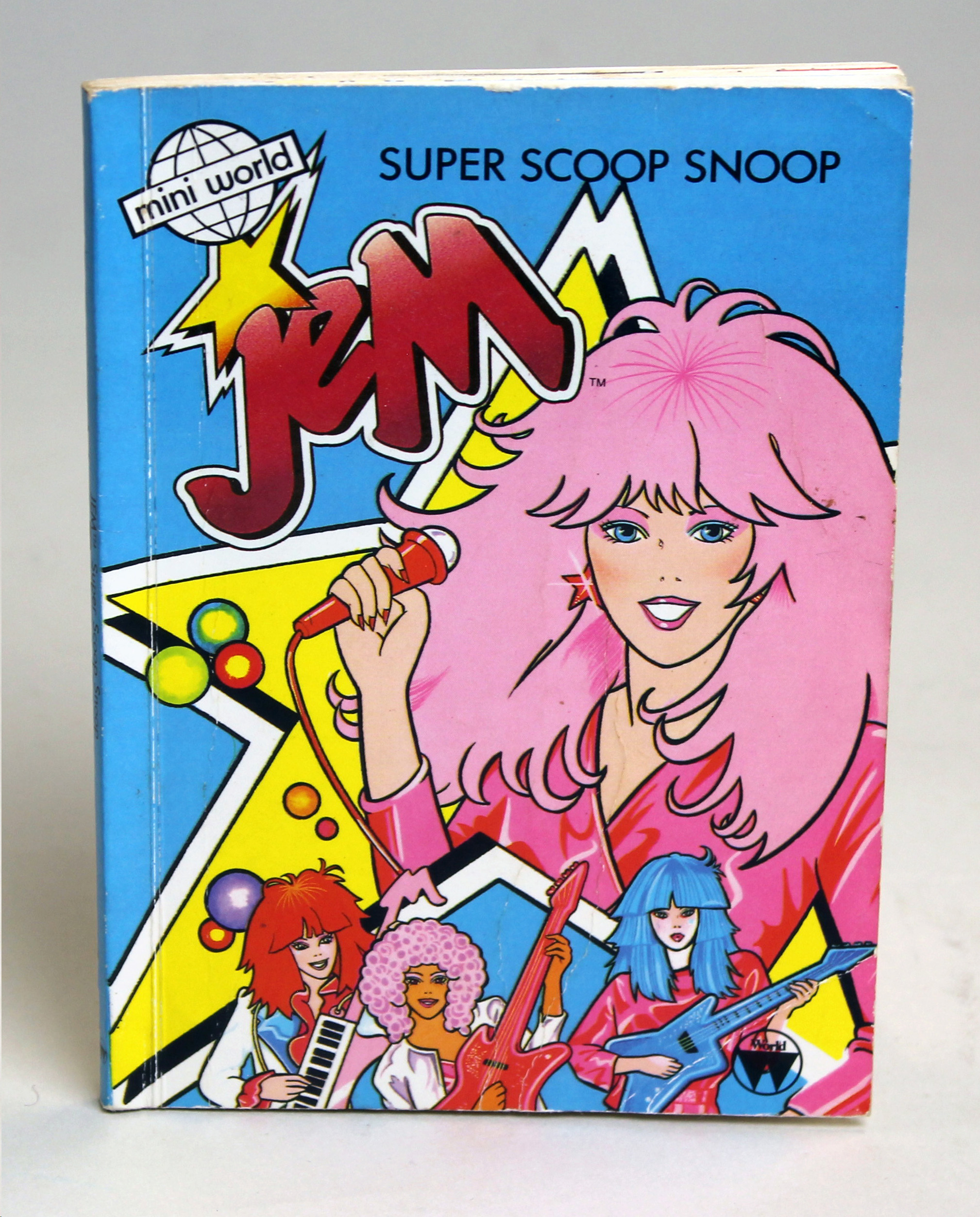