Explore the development of Hull through a journey down its historic High Street
View resources Teachers notes Share
Add to board
Previous section
High Street, Hull

Hull was confirmed as a major port when it was purchased by Edward 1 in 1293 and became the King’s town, Kingston upon Hull. Wool dominated exports and the monopoly of the De La Pole family enabled them to be Edward III’s bankers, financing the war with France.

Exports included lead (from Derbyshire), bricks and tiles (to Holland etc.) while imports from the Baltic were pitch, hemp and timber (oak and pine) all of them vital to the development of local shipbuilding and maintenance of the trading fleets.

Growth of the Arctic whaling trade in the eighteenth century provided whalebone (baleen) and oil most of which was traded coastwise to London. Coal was a major element in our coasting trade with Newcastle providing fuel for Hull and towns throughout the north.

Development of the canal system from the eighteenth century meant that Hull was the focus of a rapidly growing two way trade, raw materials inwards and manufactured goods and produce outward, which involved the whole of the north of England and the Midlands, as they underwent the ‘industrial revolution. 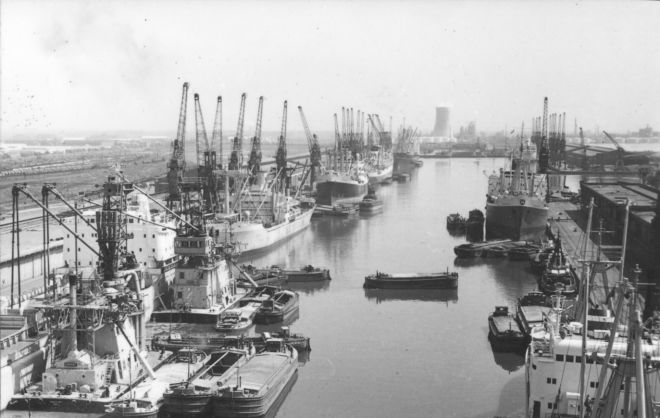 The Docks at Hull

The nineteenth century saw the advent of the railways which increasingly took cargoes such as coal, manufactured goods and perishables like fruit and fish from the canals. More and more fruit, oil seeds, and iron ore (Sweden), hides (America), and butter and bacon entered Hull which also became the base for a burgeoning North Sea fishery. Large quantities of fish provided a cheap supply of protein for the ever-growing industrial towns.

Wheat was being imported from Egypt and later from the USA and Canada much of it processed in local mills (Ranks etc.) as were the oilseeds from Africa and the Far East. By the end of the century Hull was the centre of the Empires oilseed importing and crushing trade.

Since the 1960s instead of local industries being established to process raw materials or utilise the refined products (milling, paint manufacture based on linseed, etc.) goods increasingly arrived in containers and were transported via a developing motorway system to sites all over the country. The port of Hull continues to expand but without most of the associated industry and the liberation of the Baltic States from Russian domination has led to a major revival of the ancient timber trade with northern Europe.