How the rich and poor lived in Leeds from the 17th Century to 1900s
View resources Teachers notes Share
Add to board
Previous section
18th Century Leeds: The Working Classes

The workhouse was the last resort for working people - they only went there if they had no other choice. Most poor people lived in their own homes, but received money from the parish to help them. 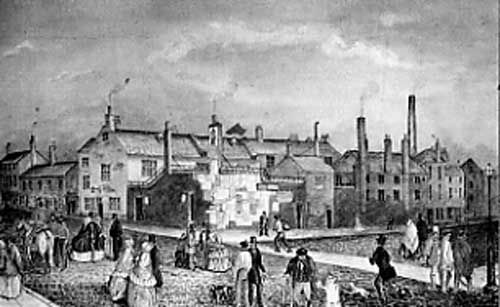 Print of the Leeds Workhouse in 1832

People who applied to the workhouse were usually homeless, very young or elderly, ill or unable to get a job. The workhouse was run by the local parish, and a committee decided who would be accepted - only one in five of those who applied.

By 1755 43 men, 60 women and 53 children were living in Leeds Workhouse. Diseases, and outbreaks of sickness were common in the workhouse and in 1741 a quarter of the inmates died from smallpox.

There were strict rules in the workhouse and anyone who did not obey would be punished. Sometimes people were asked to leave because they had behaved badly or were thought able to get a job. Inhabitants were supposed to work to 'pay back' the money used for their care, but few earned enough to do so and the tasks they were given were usually very dull, like pulling apart old ropes.

Although the workhouse never managed to end poverty by putting the poor to work, it did help many people. There homeless people found shelter from the cold in winter, and out-of-work families were fed. Many would not have survived without it.

Apply - to ask for something

Accepted - to take something that is offered

Committee - a group of people chosen to do something

Parish - a local area with its own council and church

Poverty - not having enough money to pay for your basic needs