How the rich and poor lived in Leeds from the 17th Century to 1900s
View resources Teachers notes Share
Add to board
Previous section
19th Century Leeds: The Well-Off

As more and more factories opened in Leeds extra workers were needed, and they all had to find somewhere to live. At first workers' cottages were built in the yards and courts behind buildings on the main streets, then on the outskirts of the town. 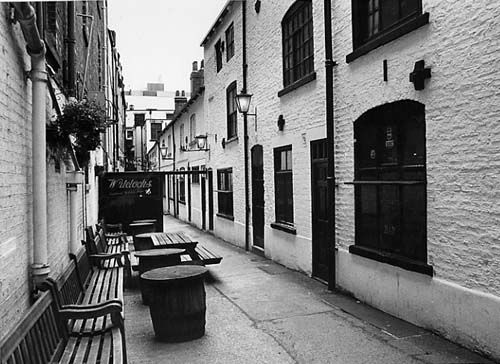 Workers' cottages in Turk´s Head Yard, Leeds
Some workers and artisans formed societies called 'building societies', where members who had enough savings and used them to buy land on which they would build houses. Eventually, every member would get their own house.

Property developers bought large areas of land and put up cheap housing, which they rented out to the workers. Most of these houses were 'back-to-back' (two rows of terraced houses built next to each other, so that each house was had another on each side and behind it).

Most back-to-backs had just two rooms of around 14 feet (4 meters) square and a cellar. Sometimes whole families rented out just one room, with the very poorest living in the cellars, where they had no water supply. These houses had no plumbing and often dozens of people shared one outside toilet. This meant that diseases like cholera were easily spread. By the middle of the 19th Century, many working class areas had become filthy, insanitary slums.

Workers had little money, if any, left over to spend on luxuries. If they were too ill to work, they would not be paid and might lose their jobs. Some paid a small monthly fee to join Friendly Societies, who would provide members with sick pay and free medical treatment if they became ill.

For most people, being unemployed was very difficult. Although there were charities offering some assistance, most had to turn to the local authorities, the parish, who would pay them a small amount of money called poor relief. After 1834 this changed. A law called the Poor Law Amendment Act stopped people who were out-of-work being given money. Instead, they had to leave their homes and go to live in the workhouse.

Most poor children had little or no education. There were some free schools set up by charities, as well as church Sunday Schools, where children were taught reading, writing and arithmetic. Most children were sent to work before they were ten.

By 1850, the average working week was 10 hours a day for six days. This left little time or money for leisure and people had no paid holiday time. There were not even any bank holidays until 1871. Many working people gathered at inns and beerhouses, when they had spare cash, or enjoyed going to Music Halls, where they would see comedy acts and musical performances. Leeds had many music halls, including the City Varieties, which still stands today.

Insanitary - dirty or dangerous to health

Leisure - free time when someone does not have to work

Outskirts - areas on the edge of a town or city