Remembrance Through Sculpture and Painting

Over 900,000 British and Commonwealth servicemen were killed during the First World War. Even if they did not lose a family member, every person in Britain was affected by the conflict in some way.
When the war ended in 1918 communities wished to honour the local men who were killed. Sometimes, however, memorials caused controversy. Everyone had their own ideas about how they should look or where they should be placed. In Oldham, there was a long-running argument about whether the planned site in the town centre, close to a pub (the pale building on the right in the painting above) was a suitable setting for a memorial. 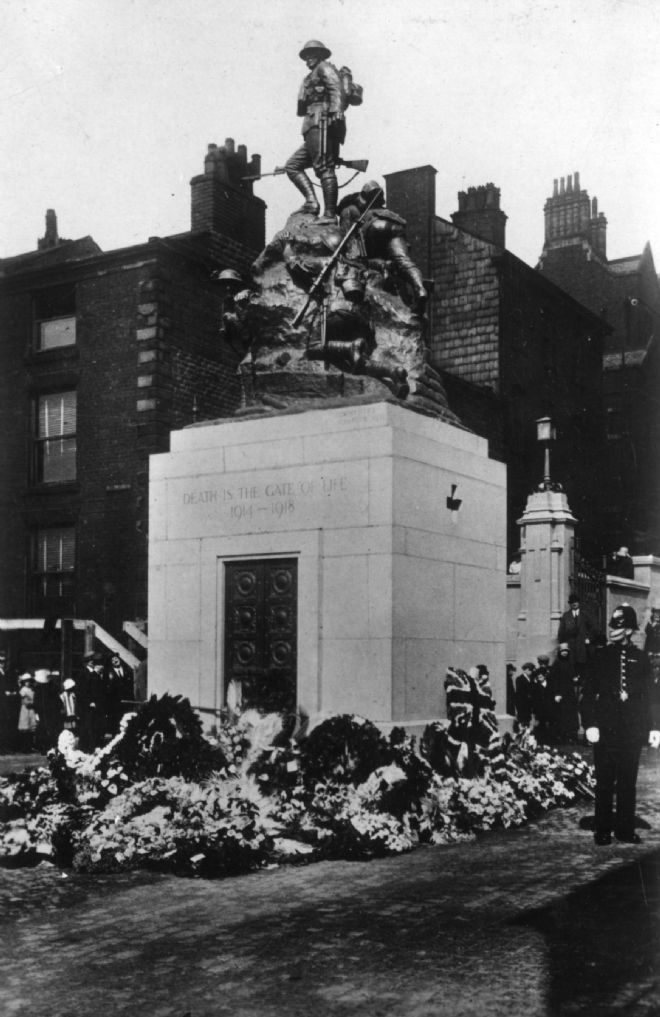 Oldham War Memorial
Despite this, the Oldham memorial was widely praised when it was finally unveiled, on 28 April 1923, to a crowd of around 10,000 (see the photograph on the right).

Design of the Memorial

At the base of the memorial is a square pedestal with plaques attached, showing the 2,688 names of local men who were killed in the conflict (200 names of those who fell in WW2 were later added).
On top of the pedestal is a sculpture of a scene from the trenches, in which five soldiers form a pyramid structure, with one man standing on top, holding his gun, as though about to go into battle. It was designed by architect Thomas Taylor and sculptor Albert Toft, who also worked on several other war memorials. 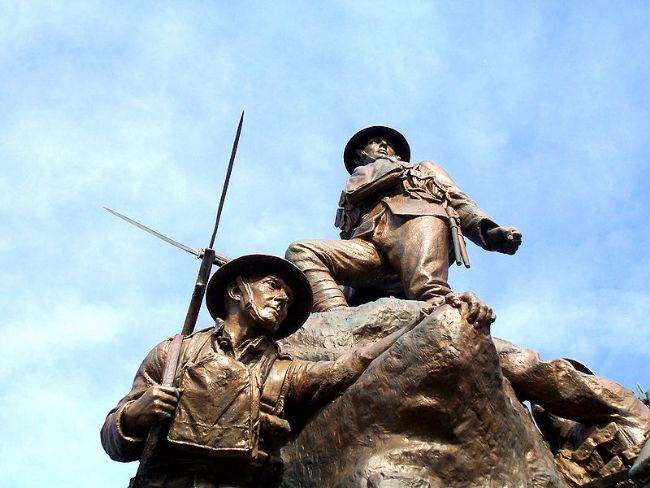 'Unveiling of the War Memorial' by James Purdy

The statue was not the only memorial to Oldham’s war-dead. James Purdy, a local artist, spent his life recording the changing landscape of the town. In 1923 he created a painting of the memorial ceremony, called, ‘Unveiling of the War Memorial’. 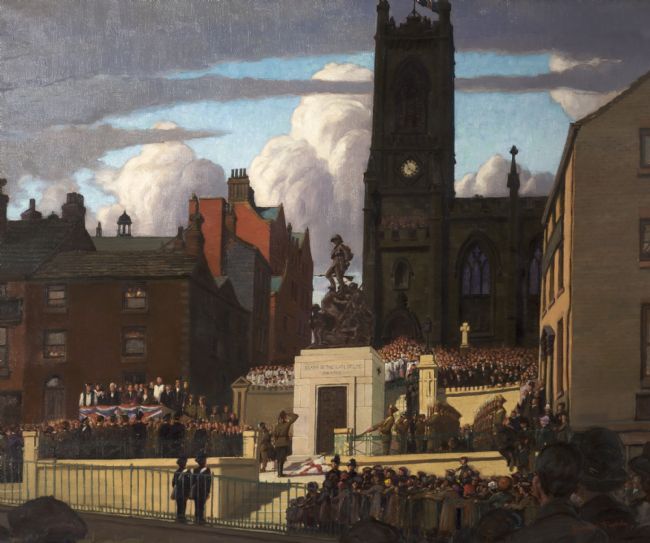 Painting Showing the Unveiling of Oldham War Memorial
In Purdy’s picture (above) the surrounding buildings are in shadow, while the sunlight brightly picks out the war memorial. The words ‘Death is the gate of life’ are clearly visible on the memorial. Large crowds of people seem to wait, motionless; a small boy perches on his father’s shoulders; uniformed soldiers stand to attention; and a choir hold their hymn books as if about to sing. 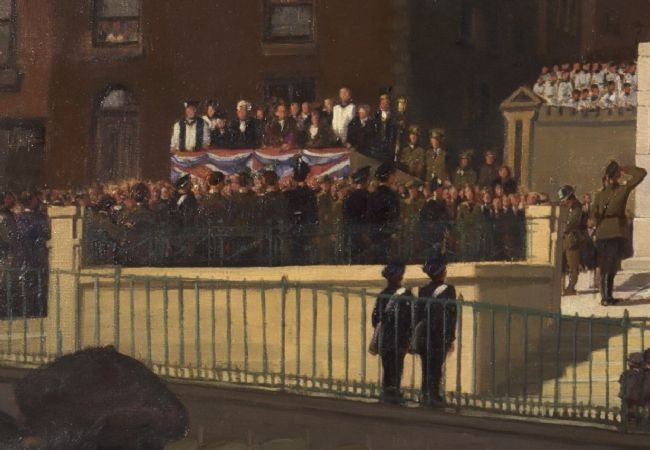 Detailing from the Painting 'Unveiling the War Memorial'
All eyes are fixed on the dignitaries and churchmen standing on a platform covered in Union Jack flags (see the detail from the painting above). These men include General Sir Ian Hamilton and the Bishop of Manchester, who dedicated the memorial. 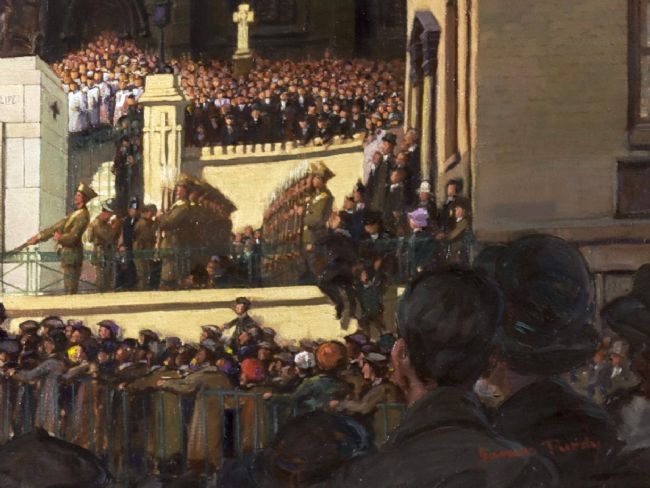 Painting showing a crowd of civilians and men in military uniform all looking in the same direction
The painting may have been commissioned by Dame Sarah Lees, who presented the painting to Gallery Oldham in 1924. Today the gallery holds many of James Purdy’s paintings within its collections. 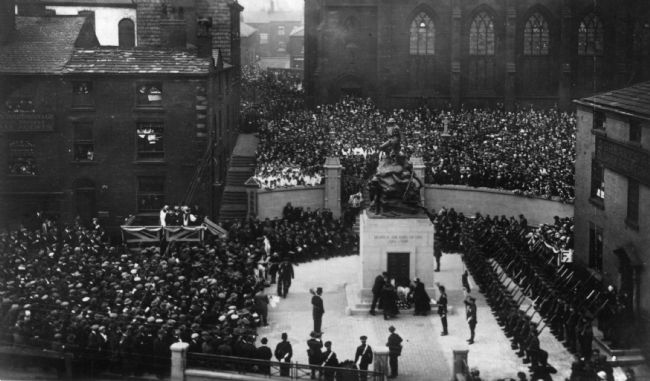 Architect – someone who designs buildings
Commission – a request to make a particular piece of work
Controversy – when people disagree about an important topic
Dedicate – to connect something with a person or group
Dignitaries – important, respected people
Pedestal – base of a statue
Plaque – small, flat piece of metal or stone fixed to a wall
Sculptor – artist who makes 3-D works of art
Suitable – the right sort of thing
Tribute – something said or done to show gratitude
Unveiling – ceremony to present a new artwork or monument
Next section