Who wore this shoe? And why is it designed in this way?
View resources Teachers notes Share View related stories
Add to board 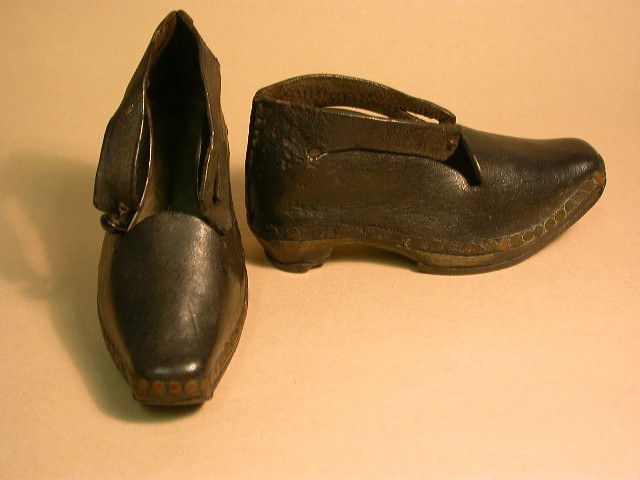 Mrs B Payne wore these clogs, when she was aged one in 1912. They were handmade from wood and leather. Before machine clogs were made, cloggers made them by hand, using the best wood they could get which was usually 25 to 30-year-old alder, because it was light, water resistant and didn’t split.

Other woods were also used, including sycamore, birch and beech. The wood would first be sawn up into different sized blocks, roughly shaped with a knife then stacked in the woods to dry out.

The clogger then shaped the wood into a sole shape, usually with a thin square toe. The leather upper, which was made of two parts, the vamp and the quarters, was shaped and nailed onto the wood, making sure the nails pointed downwards. Metal rings called Clog Irons were then attached to the sole and a fastening or clasp was added. 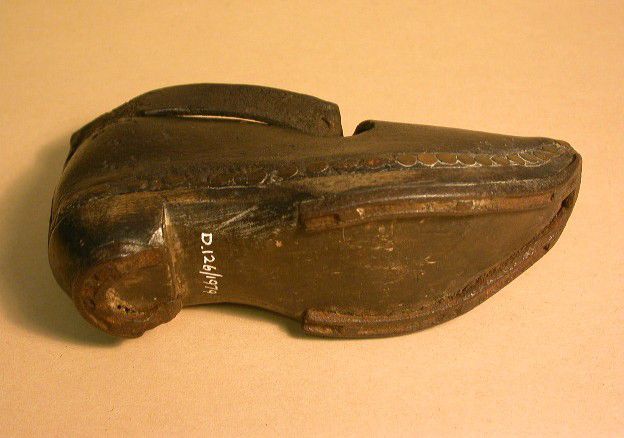 Clogs were made for practicality, rather than fashion, to protect the feet of workers in mines, pits, quarries, farms and kilns. They were relatively cheap to buy and cost only a day or two's wages. In comparison, a pair of leather shoes would cost more than a week’s wages!

Clogs like these were worn in cold and wet climates and in places that were damp or rough underfoot, usually in the Northern counties. They were said to keep feet warm in winter or cool in the summer, but were treacherous on ice. In the winter snow would stick to the soles, making snow platforms, which became known as 'Cloggibogs'.

Wearers of clogs had to learn a new way of walking, which required a special rocking or rolling movement. They were usually agony at first but the stiff leather could be made supple with butter. Children took delight in making sparks fly when they hit them against kerbs, although this would often split the sole or loosen the nails.
They were never worn on Sundays or to church, because of their unwelcome clatter and damage to floors.

Tap dancing evolved from clog dancing and famous clog dancers include Charlie Chaplin. Clogs became unpopular in the 20th century as they were thought to be a sign of poverty, although there have been some revivals of them as fashions change.