Who wore this shoe? And why is it designed in this way?
View resources Teachers notes Share View related stories
Add to board
Previous section
Padukas (Toe-peg Sandals) 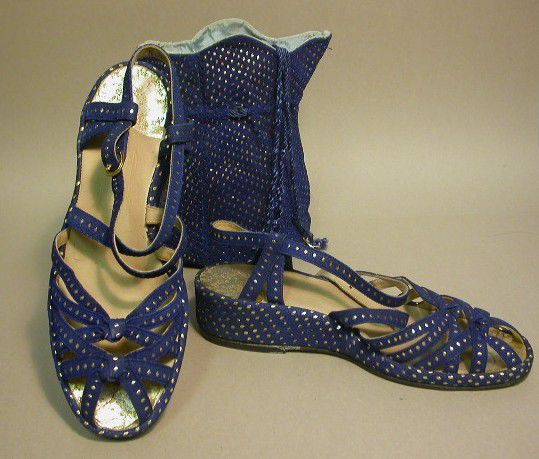 These wedge evening sandals were machine made in Denmark in 1950. They are made of plaice skin, which like other fish leathers is strong, hardwearing and doesn't smell of fish! It took between 10 and 12 plaice to make the 'Neptune' suede, which has been tanned, dyed blue and punched to reveal tiny golden stars. They have crossed straps that fasten with a horseshoe buckle.

The Danes started making shoes from fish skins during World War Two when the occupying forces confiscated their animal hides. They also used fish leather to make belts, harnesses and other accessories. Producers and wearers of fish leathers believe it makes better use of natural resources and reduces the use of skins from animals under the threat of extinction. Some manufacturers fillet the fish for food and use the discarded skins to make leather.

Skins from catfish, cod, salmon, whale, porpoise and eels have also been used to make shoes. Shark skin in particular is durable and supple, its toughness make it particularly suited to making the toe part of children’s shoes, reducing the likelihood of scuffing. Some skins are good for traction, a quality that is particularly useful for making soles.