Who wore this shoe? And why is it designed in this way?
View resources Teachers notes Share View related stories
Add to board
Previous section
Star the Dog’s Shoes

Thomas Dawson Walker was born a son of a circus manager in Hull in 1851. At the age of ten, Thomas became a clown, first appearing as the Whimsical Walker in 1865. His slapstick humour was very popular, particularly with children. He worked in England and America and in 1886 appeared by royal command before Queen Victoria at Windsor Castle. 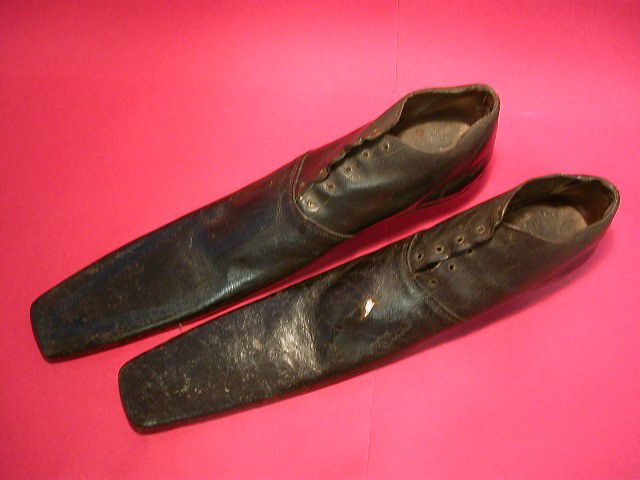 Walker also became a famous animal trainer and did his singing donkey act before the queen in 1880 at Windsor. From 1898 he appeared as the Harlequinade Clown in the Forty Thieves pantomime at the Theatre Royal in London and from 1928 he performed every year in the Christmas circus at Olympia in London, until his death in 1934.

His 44.4cm (17 ½ in.) long shoes have stiff, leather uppers, which are nailed onto the wooden soles. They are ankle high with 5 eyelets for the laces and have flat, square toes. They were handmade and have impressed lines, which imitate stitching. Because of their straight shape and unusual length one sole has been marked 'left'.