The Story of Urashima Taro who Rescues a Small Turtle 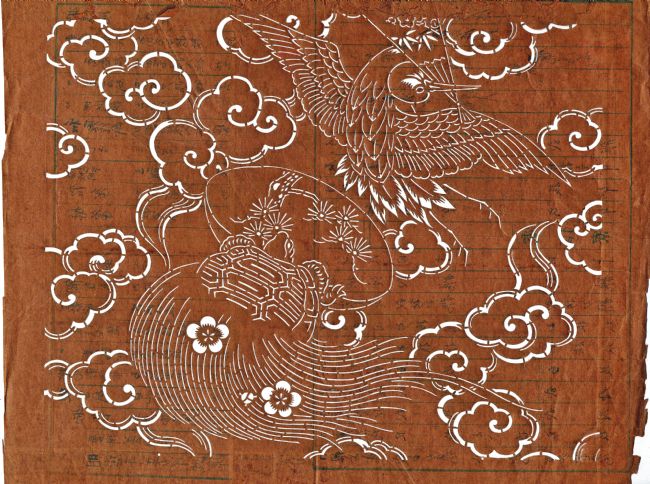 The Myth Behind the Stencil

This stencil dates back to the Meiji era in Japanese history, from 1868 – 1912. It tells the story of an old 8th Century Japanese legend about Urashima Taro. In the story Urashima Taro is rewarded with long life, for rescuing a small turtle, who turns out to be the daughter of the Emperor of the Sea.

Urashima is taken to a palace beneath the ocean, where he spends a few days. The Emperor's daughter gives Urashima a box to take home with him, but makes him promise not to open it. When he returns to his native land, he discovers that 300 years have passed, and that his family and friends are long dead. In his grief, he opens the box, which contains his old age. At this point he turns into a crane.

Symbolism
The stencil shows a crane and a 'hairy-tailed' turtle. These animals symbolise the idea of long life in Japanese culture. The crane carries a fan decorated with bamboo leaves and plum blossom. The turtle is holding a bowl, with pine trees depicted on the inside.These three plants are known as the 'three friends of winter', and symbolise resilience, perseverance and longevity. 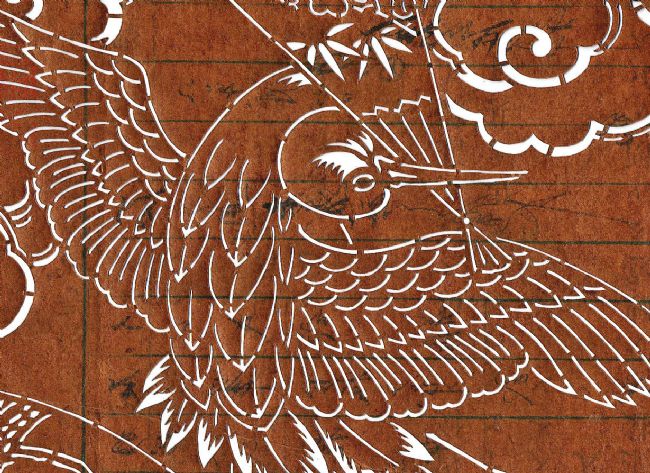 Detail of a Japanese Katagami Stencil

Technique Used to Create the Stencil
Katagami, or Japanese paper stencils were used to create patterns on Japanese textiles, mainly for the production of kimono. The stencil was made from the bark of the mulberry tree, which was flattened in layers and glued together with the juice of the persimmon fruit to make a stiff card.
The complex design was then cut into the card with precision and silk threads incorporated to hold the tiny details in place. The dyeing technique used rice paste which, when pressed through the cut-out shapes onto the fabric and left to dry, acts as a 'resist'. Once dry the fabric was put in a dye bath, and the dye would penetrate all but the rice paste area which would resist it.
By using the stencil several times a repeat pattern could be achieved. Once the rice paste was washed off, the process would be completed. It was the origin of our more contemporary 'silk screen' technique for printing posters and artists’ limited edition prints.

'It would be interesting to compare it to a modern day Japanese stencil and see how much the practice had changed.' - Katie Chester