Ukiyo-e is a style of painting and woodblock printing created in Japan from the seventeenth to the nineteenth century.  Ukiyo-e prints were like today's posters or magazines and demand was widespread. Mass-produced woodblock prints were inexpensive enough for many people to buy.
The word ukiyo was originally a Buddhist term, which described the sadness and transience of human life, it meant 'the floating world'.
Later, however, this phrase was used to describe the delights of urban culture, fashion and lifestyle - the pleasures of Japan's rich merchants and townspeople who were fans of the theatre, restaurants and the pleasure quarter. 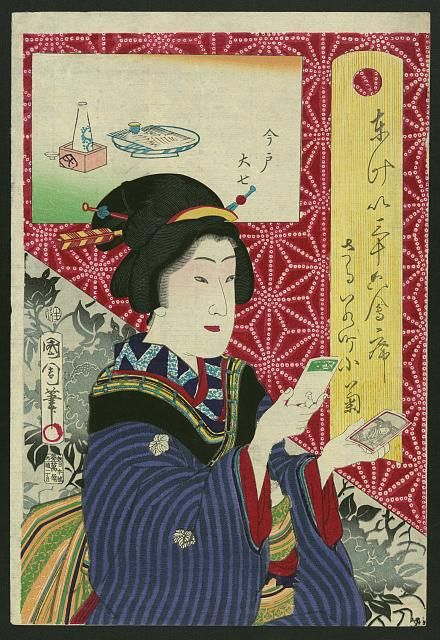 'Kogiku in Saruwaka-Cho' by Toyohara, Kunichika, 1878
Every Japanese city had an officially licensed pleasure quarter, and in Edo (Tokyo) this was a walled compound on the edge of the city, known as 'Yoshiwara'. Inside were tea houses, restaurants, puppet theatres, kabuki theatres and geisha whose beauty and style made them the cultural icons of their day. A writer described Yoshiwara as a place where people lived

'only for the moment, floating along like a gourd on the stream'.

The paintings and prints which glorified this carefree world were known as ukiyo-e or pictures of the floating world. ('-e' means pictures). They showed subjects from the world of entertainment, beautiful women, actors in popular roles, and also myths, legends and historical events.

Buddhist - someone who follows Buddhism, a religion that began in India and spread across southeast Asia
Compound - a walled in area with buildings inside
Geisha - traditional female entertainers in Japan who wear elaborate clothing and make-up
Kabuki - a type of classical Japanese theatre
Legend - a story based on true events, usually in ancient history
Myth - an ancient fictional story
Transience - lasting for only a short time
Next section

How to Find Clues Within a Woodblock Print