The artist who designed the print 'Sanada Yoshitada overcoming Matano Kagehisa before a waterfall' was called Yoshitsuya. He was born in 1822 and worked in Edo (now Tokyo) as a printmaker, illustrator and tattoo designer. Yoshitsuya died in 1866, aged 44.

Woodblock prints were not created by one single artist. The signature on a print belonged to the artist who drew the original design and he worked with a team of woodcarvers and printers whose names were rarely recorded. Woodblock print artists trained by becoming apprentices in the workshop of a master artist. Yoshitsuya studied in the workshop of Kuniyoshi Utagawa (1798-1861), one of the most important ukiyo-e artists of the time.

When they started their apprenticeship, a student took on a new name which included the one syllable of their master's name. Alongside Yoshitsuya, other artists such as Yoshitoshi, Yoshiiku, and Yoshitora trained in Kuniyoshi's famous school.

Kuniyoshi was famous for designing warrior prints called musha-e and he turned this theme into one of the most popular print subjects of the day. Although warrior prints had been made since the early days of woodblock printing, the subject had never been very fashionable.  When Kuniyoshi first started to make warrior prints in 1818, he found it very difficult to make a living; the public were more interested in buying actor prints and landscapes.

However, he had a big commercial breakthrough in 1827 with the a series of prints called '108 Heroes of the Suikoden', which illustrated stories of courage and strength.  After this, the print-buying public began to enthusiastically support musha-e prints by Kuniyoshi and other ukiyo-e artists.

The time was right for Warrior Prints. By the 1840s and 1850s, Japan was in the final phase of a long period of peace and prosperity under the Shogun rule. The price to be paid for this was a strict state control over even the most trivial things. 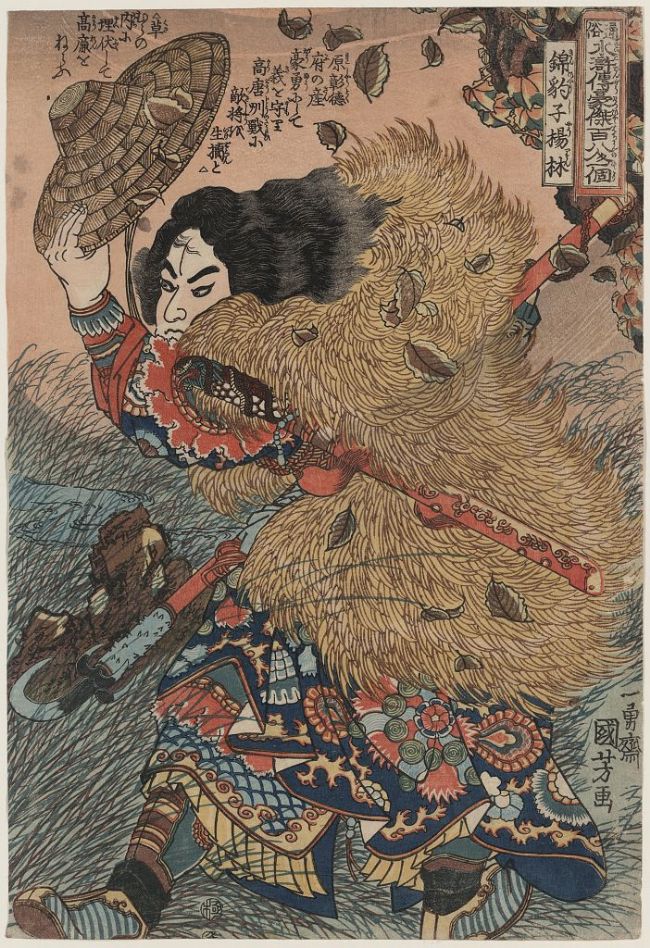 Japanese Woodblock Print of a Warrior

In 1842, censorship banned prints of beautiful women and kabuki actors, and also pictures of recent political events. Prints with historical themes were allowed, and so pictures depicting warriors and legends became the life-blood of artists like Kuniyoshi. His student Yoshitsuya carried on Kuniyoshi's legacy, and also achieved fame for his masterful prints of warriors and historic legends.

Apprentice - someone who learns a skill while working with a master

Censorship - not allowing people to do or see something

Trivial - not serious or important