Life was very hard and often frightening during the war years, and keeping up morale was an important job for Britain's leaders. It was important for people to see them out and about, and they made many visits to different part of the country.

The Foreign Secretary, Anthony Eden, came to Elland Road in Leeds, accompanied by the Lord Mayor, Willie Withey. Mr Eden arrived in Leeds by air on 5 July 1941, and after lunch at the Civic Hall, he went to speak at a big meeting held at Elland Road. 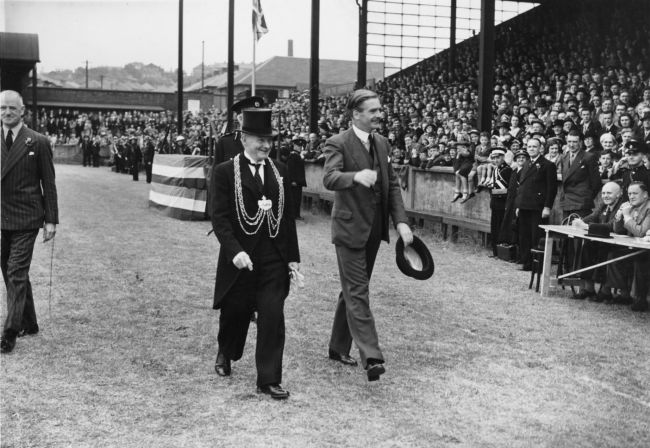 Crowds of local people waited excitedly outside Elland Road for up to three hours before he arrived. When the gates opened at 1.30pm, the Yorkshire Evening News reported that 'the place soon took on a semblance of a trek to a peace-time football cup-tie, as people arrived by tram, car and on foot'. As Mr Eden addressed a crowd of 10,000, two Spitfires planes roared over the city in honour of his visit.

A visit from the leader of one of the Allied countries was even more exciting. A visit from Charles de Gaulle coincided with Ark Royal Week, a fundraising effort to buy a new Ark Royal aircraft carrier. The people of Leeds eventually raised over £9 million in just one week. 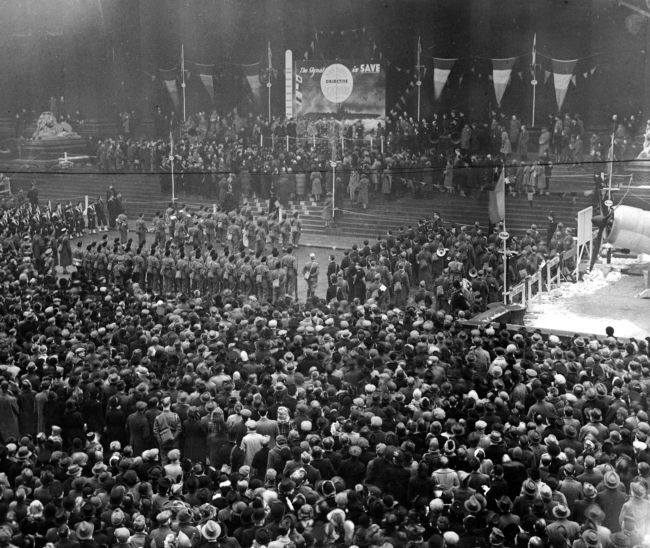 General Charles De Gaulle came to Leeds on 6 February 1942 to inaugurate Allies Day. He was invited to make a speech and to move the target indicator showing how much money had been raised towards the cost of the new Ark Royal. Wild cheering broke out when he announced that their fundraising activities had improved the previous days' efforts by £2,134,287 (over £2 million).

Sir Winston Churchill and Lady Churchill visited Leeds in June 1945, as part of a victory tour round the country to celebrate the end of the war. In the photograph below they can be seen waving to the crowds from their open-top car. They have perched on the back of the seats so that the crowds can see them. 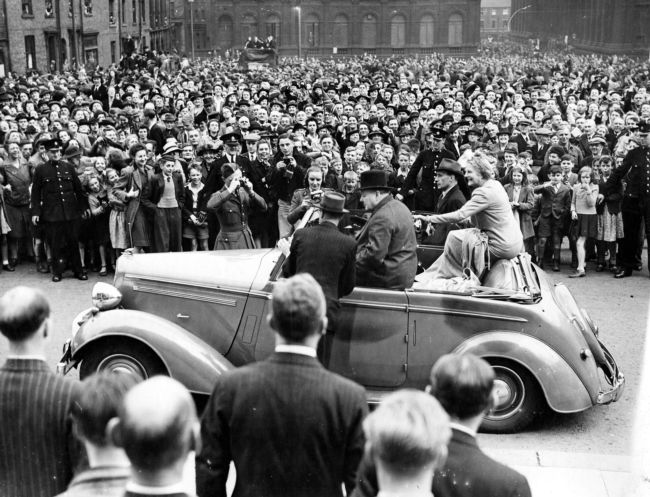 Churchill gave a speech from the steps of the Civic Hall, which was largely drowned out by the cheering of the crowds, and affectionate cries of 'Good old Winnie!', and 'Good old cigar!'. The crowds swept aside the police barrier so that they could get closer to their hero.

Winston Churchill was immensely popular during the war. However, despite this popularity, he lost the General Election on 5 July 1945 to Clement Attlee's Labour Party. People felt that a Labour Government would rebuild post-war Britain and focus on issues that were important to ordinary people.

Coincided - Happened at the same time

Immensely - To a large degree

Inaugurate - A ceremony that marks the beginning of something

Morale - How a group of people are feeling

Semblance - the way something seems to be, on the outside