Up and down the country, all through the Second World War, people were urged to help with the war effort by raising money for various charities and schemes. Towns and cities were encouraged to compete with one another to see who could raise the most money.

In Leeds, the fundraising target for Salute the Soldier Week was £6 million - enough to send 100 divisions of soldiers to Berlin. However, the city raised nearly £7 million.

The photo below shows Major General Shears making a speech, standing in front of the target indicator, which shows how much money had already been raised. 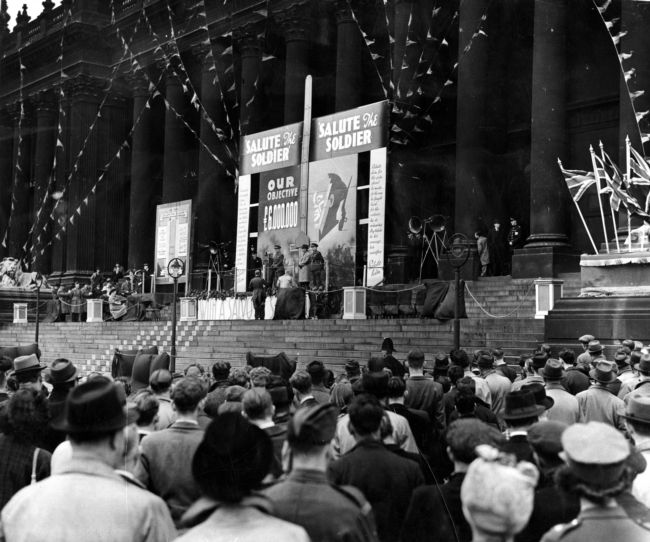 Salute the Soldier Week in Leeds

The photo below was taken during Ark Royal week.  This was possibly Leeds' greatest wartime triumph. The first Ark Royal was a wooden battleship in Sir Francis Drake's fleet, and the second was a seaplane carrier in World War One. Leeds had adopted the third Ark Royal, an aircraft carrier, for Warships Week in 1941. 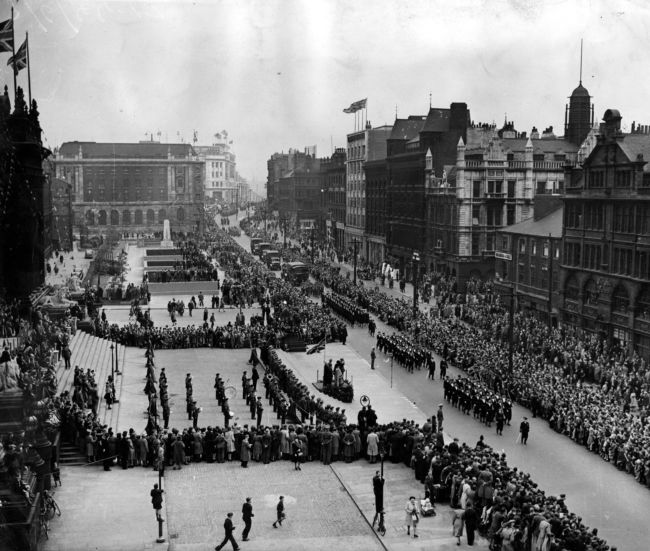 Parades in the street during Ark Royal week in Leeds

However, within days the ship had been torpedoed and sunk.

The original fundraising objective changed from raising £3.5 million for a replacement hull, to over £5 million for a replacement ship. Warship Week in Leeds became 'Ark Royal Week', and citizens gave generously. The final total raised was over £9 million, made up of all levels of donations - from children's pocket money to buy nuts and bolts, to big cheques of up to £250,000 from local businesses.

Make do and Mend - Recycling in WW2

Another aspect of the war effort was avoiding waste and recycling as much as possible. Fewer goods could be imported, now that German submarines were attacking British ships and factories changed their function to producing munitions rather than goods, so people were encouraged to be very thrifty.

An advertising campaign in 1943 had this memorable little ditty:

Someone's going to be sorry

Someone's going to be sorry

They wasted my life away

This was accompanied by a picture of a tablet of soap dissolving down the sink because it had been left in water. 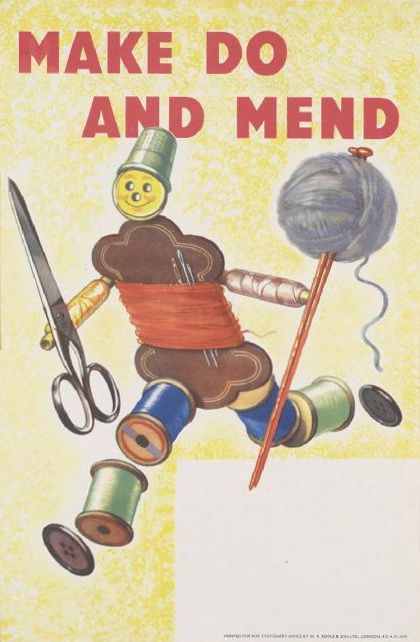 Make do and Mend poster from WW2 showing a figure made up of cotton reels, scissors and other sewing implements

Recycling scrap metal was an important part of the war effort. Old saucepans, park railings, razor blades and tin cans were all put to good use in making weapons and machinery to win the war. Another wartime song was:

My saucepans have all been surrendered,

The teapot is gone from the hob

The colander’s leaving the cabbage,

For a very much different job.

So now when I hear on the wireless

Of Hurricanes showing their mettle

I see, in a vision before me,

A Dornier chased by my kettle

The Home Front in Leeds

During the war, the term 'Home Front' referred to Britain and all the work that people 'at home' were doing to help win the war.  Many women were employed in jobs that had previously only been jobs that men did, such as welders and tractor drivers. Children were also part of the Home  Front, running errands, training to put out incendiary devices and collecting items to be recycled or sent to soldiers at the frontline.

The video below shows a window into the Home Front in Leeds.

Jobs on the Home Front in Leeds

Donations - a gift, usually of money to a charity
Dornier - A type of German aircraft
Fleet - A large group of ships or aircraft working together
Hurricanes - A type of British aircraft
Indicator - A person, thing or instrument that measures something
Objective - An aim or a goal
Salute - A signal of respect made by someone in the armed forces
Torpedoed - Hit and damaged by a torpedo
Triumph - A great success or victory