Returning Prisoners of War (POWs) were treated as heroes when they arrived back home. In Leeds, the local newspaper, the Yorkshire Evening News, had its own POW club, and organised several events to celebrate the return of these men.

On 3 November 1943, over 100 repatriated POWs and their relatives, from all parts of the West Riding, were entertained to lunch in Leeds Town Hall, courtesy of the Yorkshire Evening News and the POW club.

The returned POWs got a cheer from a large crowd outside when they arrived at the Town Hall.

The hall was draped with Union Jack flags and divided by large V signs for Victory, with an electric fountain sparkling in the centre. Before lunch, patriotic tunes were played on the Town Hall organ.

It was a fairly subdued affair, however, as people were thinking about the thousands of men still fighting or being held captive.

The POW Party in the Park 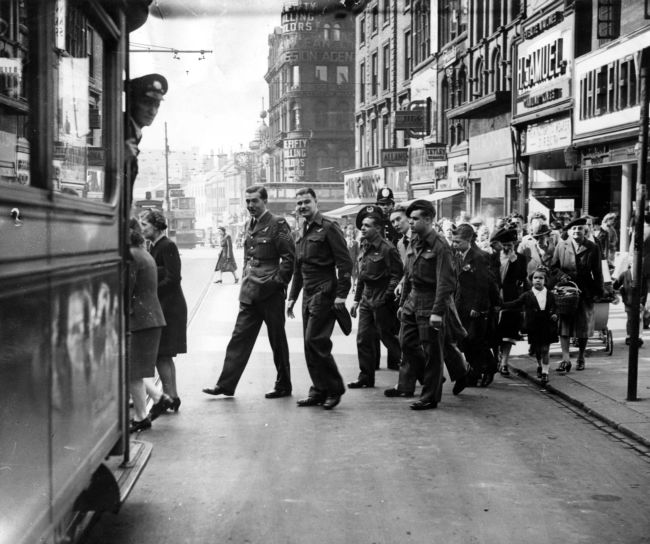 Prisoners of war getting on a bus

This is your day. I have so often written to you about the wonderful party we would have when we came back, and this is it. We have had to prepare for 10,000, but it's a job we've loved tackling.

A happy incident occurred when a call came over the loudspeakers for a Mr and Mrs Bolton of Heckmondwike. A wire had been sent to Roundhay Park to tell them that their son, who had been missing in the Far East for three and a half years, was now safely back in England.

A crowd at Roundhay Park

What happened to POWs during WW2?

Many prisoners of war experienced terrible conditions and treatment at the hands of their captors, in particular within some Japanese POW camps. Some camp staff ignored the terms of the Geneva Convention. This was one of a series of agreements drawn up at an international convention in 1864, in which nations agreed to protect prisoners of war, the sick and the wounded.

Captors - People who hold others prisoner

Convention - A formal meeting or gathering

Courtesy of - Given free of charge

Draped - Cloth used to cover something

Fortitude - Having strength in difficult times

Repatriated - To send someone back to their home country