What happened to children in Leeds who broke the law in the past?
View resources Teachers notes Share View related stories
Add to board

Children and the Law in Victorian Leeds

At the beginning of the nineteenth century, children who were found guilty of committing a crime were treated the same way as adults.  They were tried in the same courts, and could be sentenced to a period of time in a local prison or a hulk (a prison ship).  They could also be sentenced to transportation,  and sent overseas, or given a whipping or a fine.

During the 1830s and 1840s people began to call for a different method of punishment for children. Lots of people felt that putting children in prison with adult prisoners would only teach them how to become better criminals. Special hulks for children only were introduced. But these were also thought to be dangerous places that would not help children to stop committing crime.

In response to this, two acts of parliament were passed in 1854: The Youthful Offenders Act and The Reformatory School Act. Shortly afterwards, the 1857 Industrial Schools Act was passed. These Acts meant that children could be sentenced to a length of time in a Reformatory School or an Industrial School, for committing crimes, being vagrant or begging. Being a vagrant meant that you were homeless, which was a criminal offence during the nineteenth century. Children could also be committed because their parents had been sent to prison or because they had been neglected. 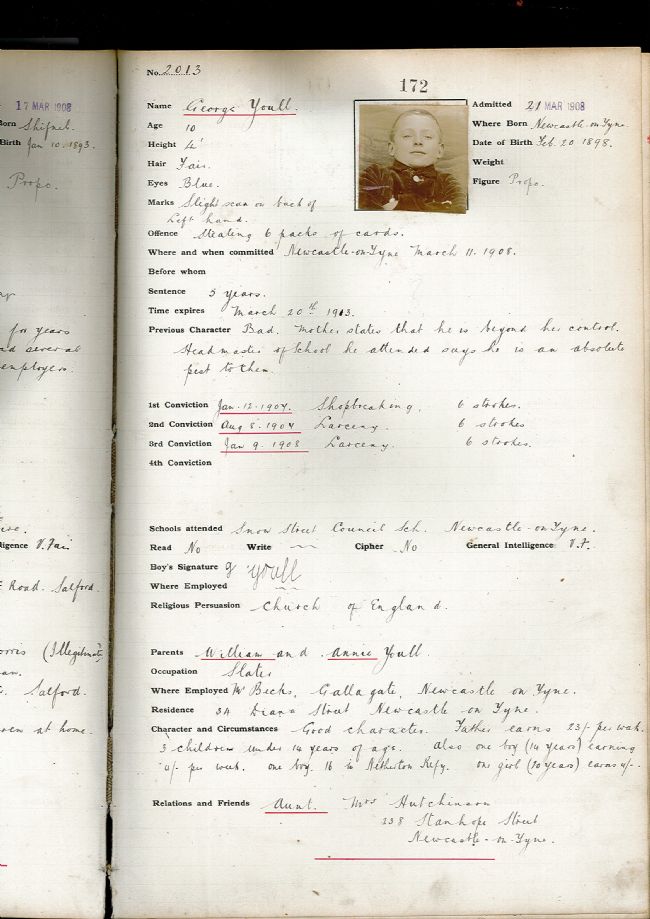 The schools were known to be very strict and tough and there are records of children being beaten to keep them in line. However both of the types of school aimed to teach the children a trade, to help them find a job once they left the school and to stop them committing crime again.

The schools for boys would try to teach them a manual trade. Carpentry, shoe making, tailoring and joinery were popular trades. The boys would also be expected to help with keeping up the house and gardens at the school. Girls were expected to go into domestic service, for example become a maid, when they left the schools. So they were taught things like housework, cookery and sewing.

Even when children were released from a school, the staff were required to keep an eye on them for a minimum of three years afterwards. This was so the government could assess whether or not the schools were working. If a child left the school and got a job, they were thought of as a success. If a child left and committed another crime, they were classed as a failure. Schools would write letters to old residents, visit them, and encourage them to come and visit the school whenever they could. Some children kept up their relationships with old schools for many years after they had left. Many considered them to be like family.

Criminal Offence – An action, which is punishable under the law, something that is illegal.

Prison Hulk – A ship used as a prison, used in England until the 1850s.

Transportation – A punishment used in Britain in the eighteenth and nineteenth centuries. People who were sentenced to transportation were sent abroad, usually to Australia, New Zealand or America.