What happened to children in Leeds who broke the law in the past?
View resources Teachers notes Share View related stories
Add to board
Previous section
Leeds Industrial School for Girls

Below is the admissions record of Annie Hornby. Annie was admitted to Thorparch Industrial School for Girls on 28 October 1909, after being convicted for ‘wandering’ at Leeds. Her record also notes that her parent did not ‘exercise proper guardianship’, which means that Annie wasn’t looked after very well. 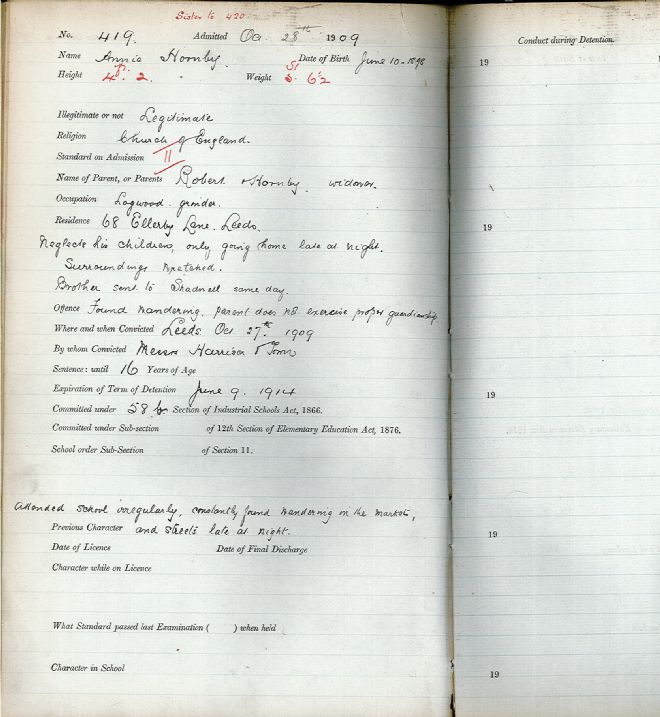 Annie’s mother had died, and she lived with her father Robert Hornby. Her record notes that her father didn’t look after her properly. The Industrial Schools were sometimes used as places to send children when their parents couldn’t look after them anymore.

Annie was eleven years old when she was admitted to Thorparch, and she was sentenced to remain there for five years, until she was sixteen years old. Annie’s record notes that she is ‘sister to 420’. 420 was Annie’s sister’s number. She was admitted to the school on the same day and sentenced to be there until she was sixteen too. The record also states that her brother was sent to ‘Shadwell’ on the same day. Shadwell was another name for the Leeds Industrial School for Boys. Annie’s record also states that she attended school irregularly, which was an offence. It is still illegal for children not to go to school now!

Do you think Annie had done anything wrong?