There were also lots of men who supported women’s suffrage. The men supporting the campaigns were always seen as suffragists. They usually worked behind the scenes to support the women and their campaigns, without overshadowing them and their work. Their support could be financial, practical or emotional.

Many of the images we have are of white wealthy women taking part in women’s suffrage and other political campaigns. There is lots of evidence to show that black and minority ethnic women/women from diverse backgrounds were active political campaigners too.

Frank Rutter was one man who spent his time in Leeds supporting the campaigners. In 1910, he was chairman of the first meeting of the Men’s Political Union for Women’s Enfranchisement, while still living in London.

In 1912, Rutter moved to Leeds and became Curator of Leeds Art Gallery. He made friends with people such Leonora Cohen, a well known Leeds suffragette, and her husband Henry.

He was a member of the Leeds Arts Club where lots of people were supporters of the Suffragettes, and would have had contact with artists like Emily Ford. When suffragette Lilian Lenton was released from Armley Gaol in 1913, he invited her to stay at his house while she was out on licence for two weeks. She apparently managed to escape dressed as a delivery boy. Leonora Cohen helped with Lilian’s escape, while Frank claimed he and his wife had not been at home that day.

When he eventually left Leeds and wrote his biography, it seems he did not enjoy his time in the city. The only fond memories he had were of the women he had met working on the Votes for Women campaigns.

Another man involved with the suffrage campaigns locally was Ernest Shew or Scheu. He lived in the Armley area of Leeds and was an active member of the Men’s Political Union for Women’s Enfranchisement. Ernest and his brother both joined as a result of hearing Leeds WSPU member Leonora Cohen speak passionately about the importance of the campaign for women’s franchise. 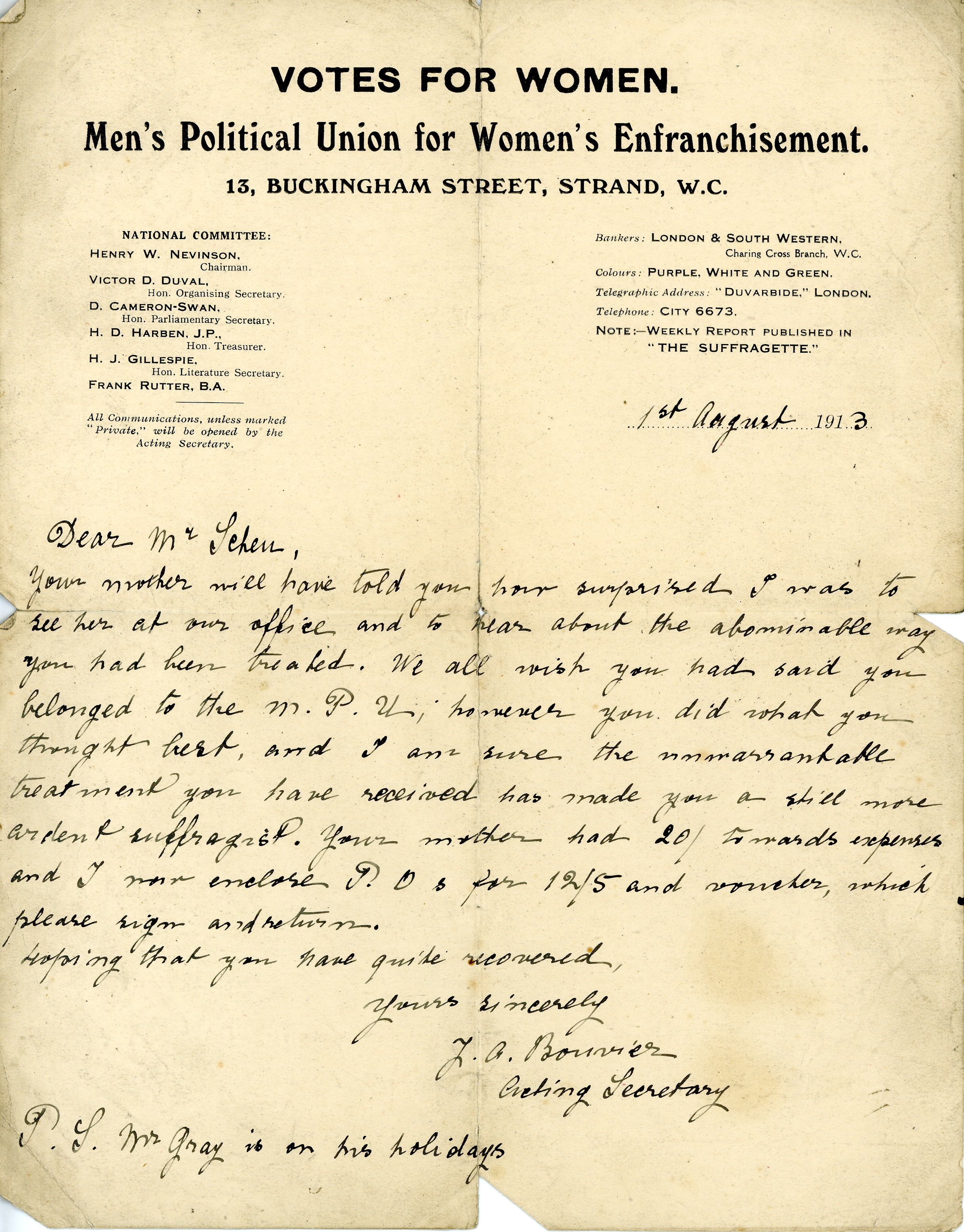 He was very keen to get involved with campaigns, and, according to a letter sent to him on behalf of the Men’s Union, he was badly treated by the police on at least one occasion. During the 1960s he was one of a very small number of men who joined the Suffragette Fellowship. This was an organisation that brought together campaigners from a number of different organisations to share their memories and experiences of the Votes for Women campaigns