Beating drums, blasting trumpets, ringing bells and shrieking whistles – street festivals are full of music. Traditional pipe and brass bands can be found to accompany some of the more traditional UK parades with the distinctive sound of steel pan calypso at the Leeds West Indian Carnival. However, there is a huge range of music that can be heard, including pop, rock, salsa, jazz rap and reggae. 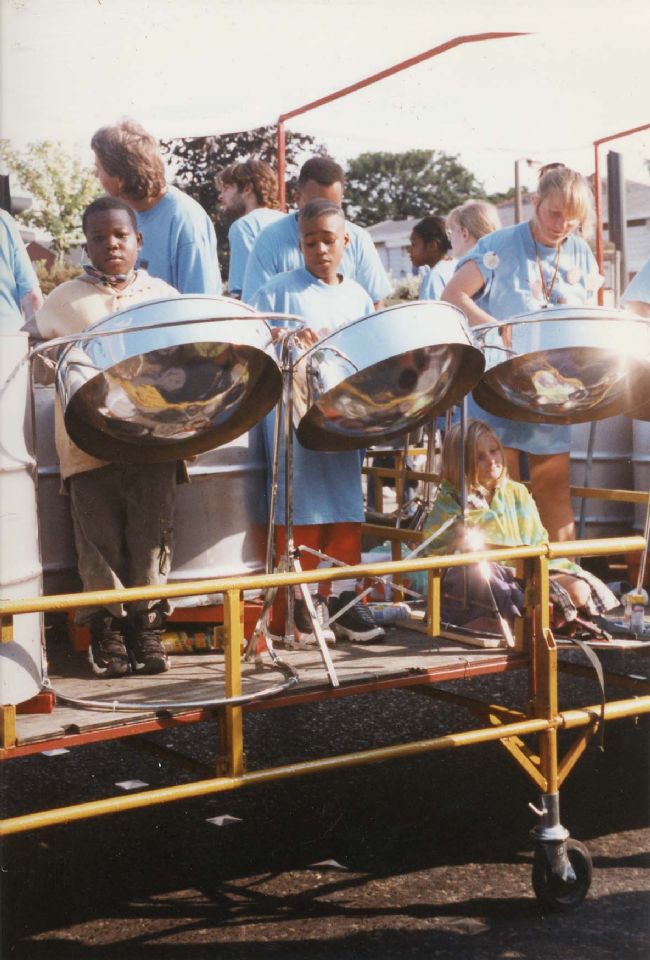 Following the marching bands the majority of participants in many smaller parades keep in a gentle marching step, with the occasional lazy stroller, and hand waving sways. The St Patrick’s parade has Irish dancing and majorettes feature in many events. For the West Indian Carnival the troupes often have elaborate dance routines, expanding from a basic left to right step to more complicated routines with swaying hips and rolling shoulders.

Many troupes, bands and DJ’s also choose to take part in the parade on a float which is often a flatbed lorry. It costs money to hire a flatbed lorry for a float, so sponsorship from lorry firms is a big bonus. Decorating the lorry can take almost a whole day. Having a lorry is ideal for letting youngsters sit rather than walk long distances, for bands to be able to concentrate on their music, and for presenting a large tableau.

At the Leeds West Indian Carnival the music that is played and performed covers a wide range of different types of music, all of which have an important significance to the history of the Caribbean. There is a strong tradition of Caribbean music linked to the West Indian trade in enslaved Africans through the way in which the enslaved people of the plantations used music as a way of communicating, of making their situation more bearable, and of bringing about a wider sense of community.

Kaiso was the name of the songs sung on the plantations by the enslaved people.

Calypso is the sound of the West Indies. Created in Trinidad & Tobago with African and French influences it combines social commentary in the lyrics with big rhythms and soulful voices.

Steel pan is the only truly musical instrument to be invented in the 20th century. The pans were crafted from cut, shaped and tuned oil drums in Trinidad and Tobago.

Soca is the high energy music you’ll hear pumping from sound systems that accompany the Carnival Parade. It is a heady mix of calypso, electronic jazz beats, thumping bass lines, melodious horns and rhythm sections all mixed up with great harmonies. Listen to Kadijah talk about Soca dancing and its roots.