From a Melted Cash Float to Firefighting Ladies

Throughout the Second World War, enemy bombing hit over 100 M&S stores, destroying 16 entirely. By the end of the War in 1945, three-quarters of all the men employed by M&S were serving in the Armed Forces (a special Forces Bulletin was sent out with news from home and abroad), but there were extra duties for many of those remaining. 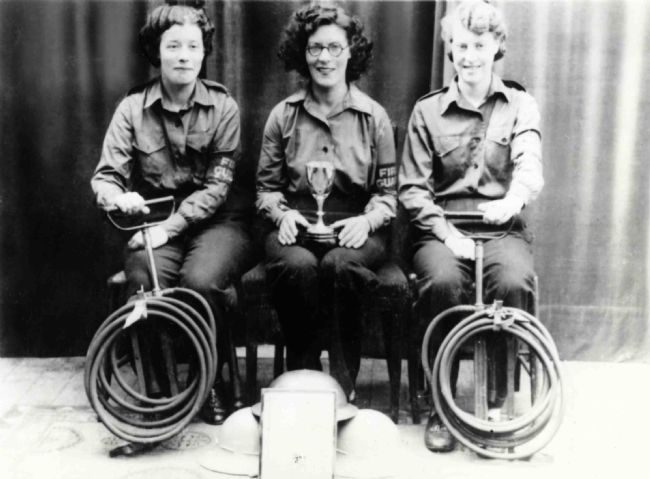 M&S Staff Firefighting Team 1944
The M&S Canterbury Staff Firefighting Team of 1944 were responsible for dealing with incendiary bombs and putting out fires. As most men were in active service, chief positions were filled by women who took on new roles and responsibilities at almost every level of the Company. The loyalty and determination of the female sales staff played a crucial role in keeping M&S going through the War years.
There was a devastating raid on Bristol on 24 November 1940 – the fires in the city could be seen from 160 miles away. The M&S store was completely destroyed and these melted coins, found in the wreckage, were all that remained of the cash float. 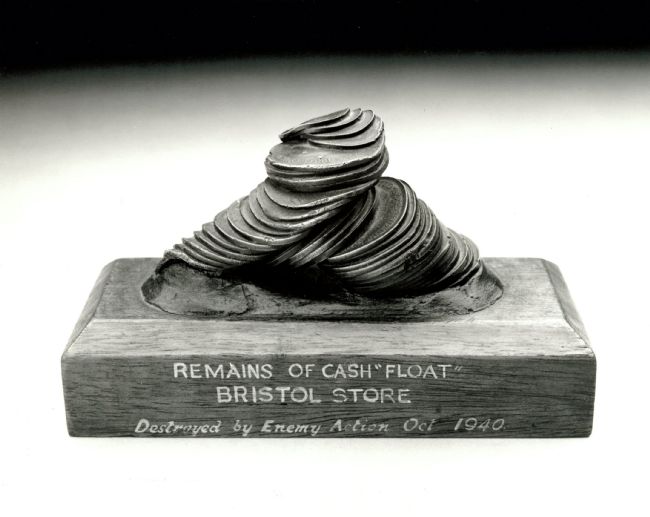 M&S Melted Cash Float 1940
The store manager Mr Fearn recalled that he tried to get to the store on Castle Street by 8.00pm but the whole area had been cordoned off and he believed that the store had been totally demolished. The following morning he tried to reach the store again, he recalled seeing:

'a labyrinth of hose-pipes, tired and dirty policemen and firemen' and 'a crowd of sales girls, some of whom were in tears'.

Apart from this devastation the Bristol store faced other tragedies with the loss of staff; Mrs K. Downs was killed by a bomb blast outside the store on her way to the dentist in August 1942, and the assistant manager Major Ronald Crouch, MC, Royal Artillery was killed in an accident whilst serving at the end of the War. A temporary store was opened at 64-66 East Street in the Bedminster area of Bristol on 28 March 1941, this store remained open for 25 years until its closure on 19 March 1966.

Cash float -  coins and banknotes used by shop staff to give change to customers paying in cash
Incendiary bombs - bombs filled with chemicals such as magnesium, phosphorus or petroleum jelly (napalm) that were dropped in clusters to spread fires
Labyrinth - a complicated network of connecting tunnels
Next section