The earliest bra in the M&S Company Archive collection dates from 1926. It was designed to suit the fashion of the time, which was for a straight silhouette - the Flapper style. Women could also buy fancy garters in Marks & Spencer in the 1920s for one shilling (5p) a pair. 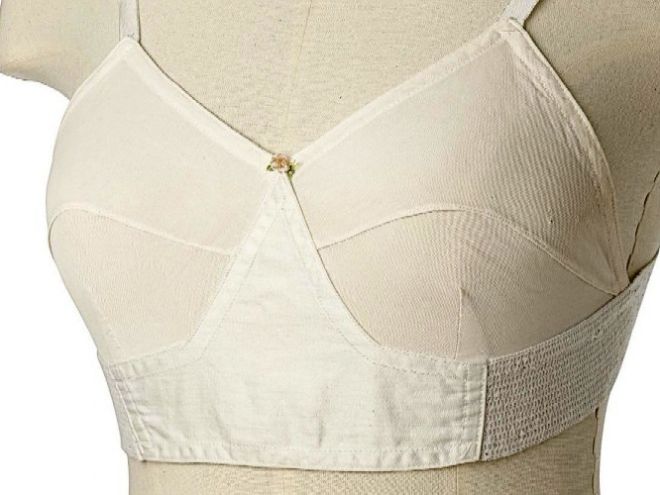 1920s Flapper Style Bra from Marks & Spencer
Prior to that corsets would have been worn to give women a more curved silhouette with a very narrow waist. This advert from the early 1910s (pictured below) claims that ' to reduce the figure you must contract the figure...permanently reduces the figure, and affords binding support'. It had real whalebones built into it, and anyone needing a size above a 30 inch waist had to pay 4d (2p) per inch extra! 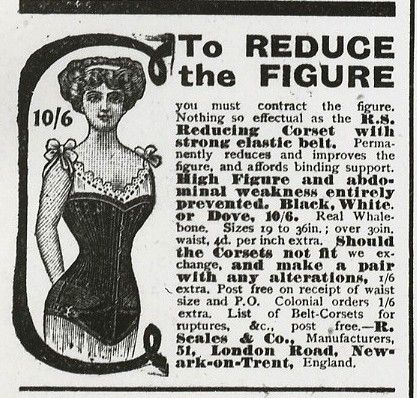 An Early 1910s Marks & Spencer Advert for a 'Reducing Corset'
From the 1930s M&S sold a full range of lingerie: corsets, bloomers, stockings and bras. In order to offer women a choice of designs and styles, old-fashioned knee-length 'Directoire' style knickers were sold alongside the more fashionable 'French' knickers.
See discussion and activity ideas page for suggestions on ways in which this material can be used to prompt further research.
Download the M&S Fashion Timeline which lists significant dates in the Company's history, particularly focusing on the development of its clothing and fashion brands.

Directoire style - a period of art, fashion and design between 1795-1799 (named after 'The Directory' in France after the Revolution)
Flapper - a style followed by women in the 1920s that featured shorter skirts then those worn previously and 'bobbed' hairstyles
Garters - bands of elasticated fabric to hold stockings up
Lingerie - women's underwear and nightclothes, usually more fashionable than functional
Silhouette - an outline image of a person's figure
Next section