The Ruin: a Poem from the Exeter Book

The poem below is from a manuscript (partly damaged) that forms part of what is known as the Exeter Book  which includes a number of poems and other works (see Supporting Links in 'Resources') . The whole book is believed to have been written by one individual although he was copying a number of different texts. The form of the handwriting dates it to the later part of the 10th Century but some poems could be earlier. 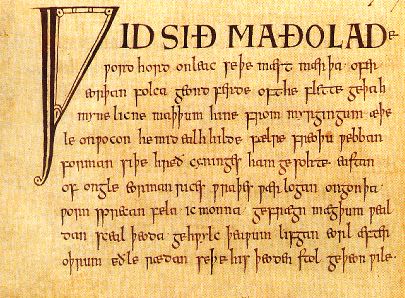 Excerpt from the Exeter Book

The book is believed to have been given to Exeter Cathedral by Leofric, the first Bishop of Exeter who died in 1072.

This poem, The Ruin, describes a Roman city (probably Bath) seen through the eyes of an Anglo-Saxon. The poem is incomplete, but these are the opening lines in the original language:

And in modern English prose:

'Wondrous is the stone of this wall, shattered by fate; the precincts of the city have crumbled and the work of giants is rotting away.

There are tumbled roofs, towers in ruins, high towers rime-frosted, rime on the limy mortar, storm-shielding tiling scarred, scored and collapsed, undermined by age. The rampart, hewn by men, crumbles away.

'There were bright city buildings, many bathhouses, a wealth of lofty gables, much clamour of the multitude, many a mead-hall filled with human revelry – until mighty Fate changed that. Far and wide men fell dead: days of pestilence came and death destroyed the whole mass of those renowned swordsmen. Their fortress became waste places; the city rotted away: those who should repair it, the multitudes, were fallen to the ground.

For that reason these courts are collapsing and the wide red roof of vaulted beams is shedding its tiles. The site is fallen into ruin, reduced to heaps, where once many a man blithe of mood and bright with gold, clothed in splendours, proud and flown with wine, gleamed in his war-trappings, and gazed upon treasure, on silver, on chased gems, on wealth, on property, on the precious stone and on this bright citadel of the broad kingdom.'

Aethel: A Woman of Substance