The film’s narrative and content are designed for children aged 5 – 11 years. It includes a variety of music recording formats and musical genres, and gives a brief introduction to popular music in the early 20th century.

It is suggested that teachers watch the film before showing it to students, and become familiar with the contents of this pack so that they are able to answer any questions. Key terms used in the film include: graphic notation, score, band leader, Black Bottom, Charleston, Foxtrot, Jitterbug. The film also shows vinyl records, a CD and cassette tape.

The film is 3 minutes 4 seconds long and includes stopping points with questions which are listed below. These can be used as a starting point for classroom activities or a way of finding out what students already know. 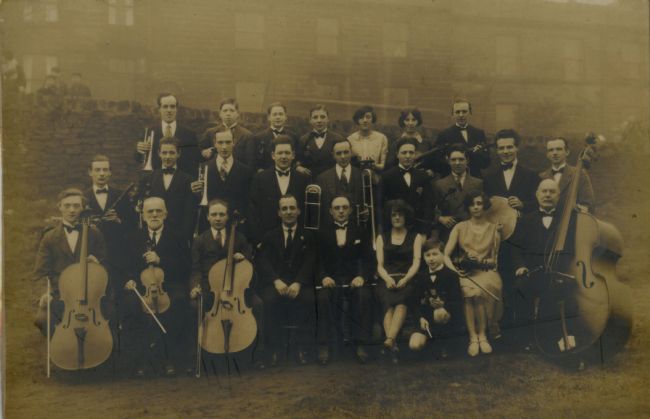 The Huddersfield Labour Party Band from the 1920s

The question refers to the vinyl records, CD and cassette tape shown previously. Find out if these are familiar to the children, and show them images of a record player, CD player, and cassette tape player – or better still the actual items. Ask the children what other recording formats they can think of – they may know mp4 files and DVDs.

They could then choose everyday objects which can be played in this way and write a graphic score for their piece.

A list of groups making music with unlikely objects can be found here: www.senselist.com – these include music made with vegetables, scrap metal, car parts and dustbin lids. A YouTube search will find many examples and the BBC bitesize series includes videos showing how children can make music from trash objects.