Peter Howson was born in London in 1958 and moved with his family to Prestwick, South Ayrshire, Scotland, when he was four. He became known as one of the “New Glasgow Boys”. A group of Glasgow School of Arts students who shared an interest in painting as social commentary. Whilst his work has been popular (he is a favourite of stars such as David Bowie, Sylvester Stallone and Madonna), it has generally dealt with dark subject matter.

In 1993, Howson went to Bosnia as the official war artist for the Imperial War Museum.

Having developed a hatred of war during a brief stint as a Royal Highland Fusilier as a young man, he did not shy away from depicting the horrors of the conflict in Bosnia and Herzegovina. 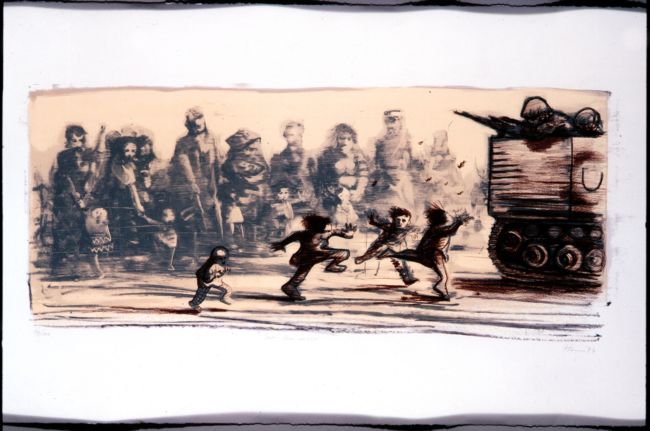 At first glance, the screenprint “Bon Bon Alley” (1994) offers a gentler scene. It shows a group of children running after a military vehicle begging for sweets, shouting “Bon bon”. The shadowy figures in the background create an air of sadness and claustrophobia, and they emphasise the smallness and vulnerability of the children in the foreground. Howson’s work demonstrates how art must sometimes act as a witness for the uncomfortable truths.